On 8 September 2019 The Sunday Times published a letter by Robert Francis and Henrietta Hughes NHS Freedom to Speak Up Guardian regarding a row in which a high profile doctor who had campaigned with the anti-Brexit party Change UK on the dangers to health services had exchanged words with Jacob Rees Mogg, the Brexiteer politician on a radio programme. In parliament, Rees Mogg later compared the doctor to Andrew Wakefield, a medic who had been disciplined by the GMC in regards to his controversial claims about vaccination.

There was condemnation of Rees Mogg’s use of parliamentary privilege to make such a remark, including by the Department of Health and Social Care’s Chief Medical Officer who wrote an open letter as follows:

After it was safe to follow such majority condemnation, Robert Francis & Henrietta Hughes hopped onto the already rolling bandwagon and wrote an open letter to the Secretary of State for Health and Social Care, ostensibly urging him to tell NHS staff that it was appropriate and safe to speak up.

More importantly however, Francis and Hughes took the golden opportunity to pat themselves on the back for purported “positive progress being made with the Freedom to Speak Up agenda”and to claim ( illusory) “freedom to speak up” in the NHS. Of course, they provided no evidence for their dubious claims:

This letter, a piece of political theatre, threw up serious questions about inconsistency by Henrietta Hughes.

She and her sponsoring bodies have done their level best to water down Francis’ original recommendations from the Freedom To Speak Up Review, weak as they were.

Francis recommended quite clearly that the National Guardian should have a role in ensuring redress where whistleblowers have been mistreated.

Hughes has stoutly resisted this. Hughes has abandoned NHS whistleblowers in dire straits, some of whom have gone on to lose jobs and homes, claiming that she had no remit to intervene in their employment matters or individual cases.

She has even conjured up reasons for excluding whistleblowers from her case review process that do not feature in her official, published exclusion criteria.

She even insisted that she cannot even review cases for wider governance learning until absolutely all processes are complete, including Employment Tribunal proceedings, which can take years.

Francis seemed to have acquiesced to these developments. Indeed he refused to meet with me when I asked to discuss concerns with him about the implementation of the Freedom To Speak Up project, writing a rather unfortunate email to Hughes about this.

Yet in the Rees Mogg affair Hughes was intervening in a case which was not clearly within her remit. The Brexit speaking up case was more about government policy and its consequences, in the context of advising NHS England, rather than wrongdoing by an NHS trust employer or its staff.

A local newspaper report of 26 March 2019  stated that the doctor concerned “has been made the subject of a non-disclosure agreement (NDA) regarding Department of Health and Social Care preparations for a no deal Brexit”. If so, it was possible that some sort of contractual arrangement existed with NHS England. However, a blog by the doctor of 14 May 2019 indicated that he had not been asked to sign a non-disclosure agreement.

The doctor’s primary employer, an NHS trust, was happy for him to speak to the media in a private capacity about his concerns with government policy:

“I warned my Trust, who were happy for me to be interviewed in a personal capacity.”

So the next time that an NHS trust whistleblower who does clearly meet the National Guardian’s case criteria asks her to intervene, what will be her response?

“I’m sorry but I cannot intervene, because your case carries no political/ publicity/ career advantages for me.” ?

As a member (and former Chair) of Henrietta Hughes’ Accountability and Liaison Board for over two years, Francis can be criticised for not ensuring that Hughes discharged her responsibilities fairly and consistently.

Also undermining the sincerity of the grand gesture letter to Matt Hancock, Hughes continues to evade the question of whether NHS whistleblowers’ concerns are addressed.

In the very basic data that she asks NHS trusts to provide, she does not track whether whistleblowers’ concerns are addressed.

The proper handling of whistleblowers’ concerns is the central issue in whistleblowing governance.

I raised concerns with parliament last year about the National Guardian’s disinterest and failure to track whether NHS whistleblowers’ concerns are addressed.

The Chair of Health and Social Care Committee advised that she would raise the matter with Hughes.

I heard no more and there was no evidence of any change in the data tracked by Hughes’ Office.

In August I wrote again to parliament. I did not receive a very clear answer on what action had been taken in the intervening months, but Sarah Wollaston did offer once again to raise the issue with the National Guardian.

The correspondence with the parliament to date can be found here.

Below is the latest incredibly weak & wriggly response from the National Guardian. By its style, one senses that it has Sir Humphrey’s imprimatur. 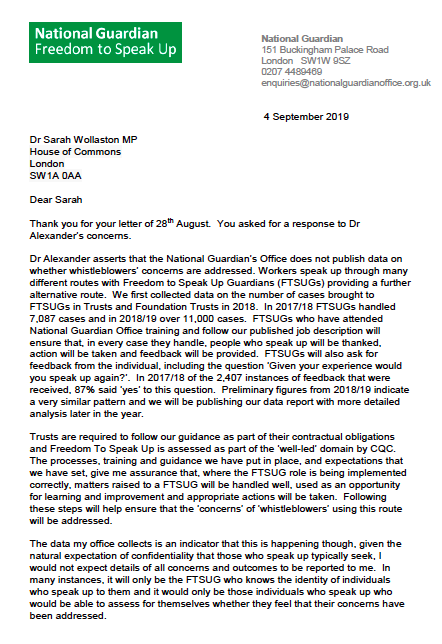 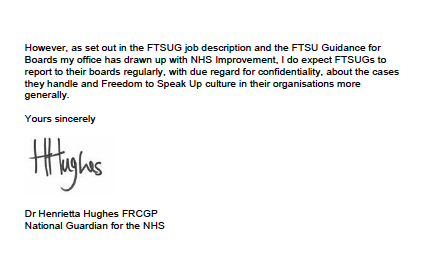 This is sheer nonsense as Hughes could clearly apply the same process that she uses for all the other data parameters that she already tracks.

It is plainly disingenuous for her to seek and accept Speak Up Guardians’ reports of detriment experienced by whistleblowers, but then in contrast claim that only whistleblowers can determine if their concerns have been addressed.

I will write back to Health and Social Care Committee to raise my concerns about this further obfuscation.

The simple truth is that the government does not want to go anywhere near whistleblowers’ concerns, and Henrietta Hughes will not risk upsetting the government.

As for her and Francis’ comment in their letter about political inconvenience, arguably their greatest hypocrisy is their refusal to date to oppose the government by supporting reform of totally unfit UK whistleblowing law, which Francis acknowledged was ‘weak’.

Hughes’ joint letter with Francis to Hancock was just opportunistic display, for the benefit of those at the top table.

It was not in any way the quiet, unsung altruism of many NHS frontliners who suffer every day for speaking up when their livelihoods are at stake and their managers are hostile.

The government is as hypocritical as ever and despite the recent political panto, it has no intention of acting properly on NHS staff’s concerns.

I am in fact waiting for a reply from Matt Hancock to a letter of 8 September about his Department’s failure for the best part of a year to answer a simple question on the investigation of NHS and social care whistleblowers’ concerns. I doubt I will receive a meaningful response.

Secretary of State for Health and Social Care

Will the government ensure that the Care Quality Commission investigates individual whistleblowers’ concerns?

As you will see from the letters copied below, I have been in correspondence with the Department of Health and Social Care for the best part of a year in order to get a very simple question answered:

“It would be very helpful if the DHSC could either clearly confirm that CQC has the power to investigate individual whistleblowers’ concerns, or alter CQC’s regulations to make this unequivocally so.”

I have tried without success to resolve the issue including with the Minister of State for Care, who is ironically the MP for Gosport, who one might hope would be alive to its importance.

Ensuring the investigation of whistleblowers’ concerns is the major unresolved issue at the heart of NHS, and indeed all UK whistleblowing governance.

Without addressing this single central issue, all else is effectively noise.

I would be very grateful if you could ensure that the Department finally provides a clear and meaningful response as per my request of 9 August to Mr Addison.

A Serious Health Warning about the Freedom To Speak Up Project: What all NHS staff should know before they whistleblow 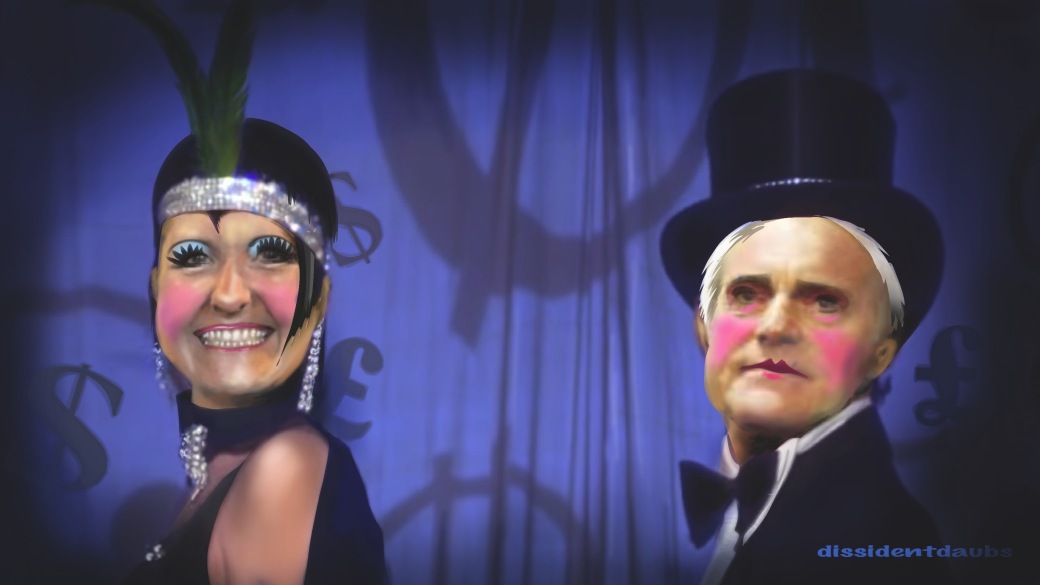 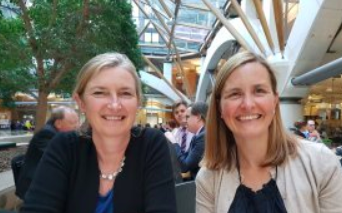