The government continues to duck and dive when pressed to ensure that whistleblowers’ concerns are properly handled and investigated.

The scope of a forthcoming CQC consultation event which originally included review of CQC’s whistleblowing processes and policy, has now contracted.

This followed a request to the DHSC to clarify its position on the investigation of whistleblowers’ concerns in time for the CQC’s consultation event.

Alongside this, judging from her routinely published data, the National Guardian still does not track whether whistleblowers’ concerns are addressed.

But that does not stop her from claiming that Freedom To Speak Up guardians have prevented “untold harm” and saved lives.

The correspondence with parliament regarding these issues over the last year can be found here.

This is the latest exchange of letters with the Chair of Health and Social Care Committee about these matters:

Thank you for your letter yesterday replying to my enquiry of 9 August 2019, both copied below, and your offer to seek an update on whether the NHS National Freedom To Speak Up Guardian will in future track whether whistleblowers’ concerns are addressed.

I would be grateful if you would do so.

You will recall that I asked the Committee to consider this issue last September.

The situation now is very serious, because not only is the National Guardian continuing to fail to track whether whistleblowers’ concerns are addressed, but she recently made unjustified claims that NHS Freedom To Speak Up Guardians were preventing “untold harm” and saving lives even though she still has no safe oversight of whether whistleblowers’ concerns are addressed.

This is correspondence with the National Guardian and her Office which revealed the lack of substantiating evidence for her claims about lives saved:

Professor Sir Brian Jarman, an internationally acknowledged expert on mortality in healthcare made these observations about the lack of adequate evidence: 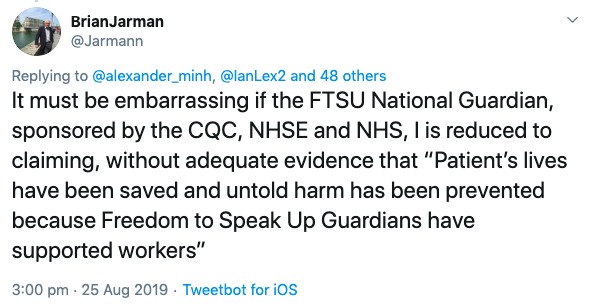 In addition to the concerns about the actions and omissions of the National Guardian’s Office, the Department of Health and Social Care maintains its silence on whether it will ensure that the Care Quality Commission has and uses clear powers to investigate individual whistleblowers’ concerns.

I was invited to attend a CQC event next month which included review of CQC’s policy and processes for handling whistleblowing, and sent relevant policy and guidance documents.

However, after I asked the DHSC to clarify its position on investigation of individual whistleblowers’ concerns in time for this consultation event, the CQC advised me and other whistleblowers that the scope of the event would be much narrower than originally advised in CQC’s invitation letter. Indeed, CQC told us emphatically:

“Therefore the event on the 2nd…will definitely not touch on our current guidance and your concerns about its current limitations.”

I am concerned that the DHSC is continuing to control the narrative in an unhelpful way, and undermining any work to resolve the most fundamental flaw in Health & Social Care whistleblowing governance: the failure to reliably investigate individual whistleblowers’ concerns.

I hope that parliament will seek the clarity that is needed on this vital issue, in the interests of safeguarding the public.

It is an issue replicated across sectors, and reflects the un-rectified, central failure of UK whistleblowing law to compel investigation.

Without a fit for purpose legal framework as a starting point, the same failures will repeat ad nauseam. 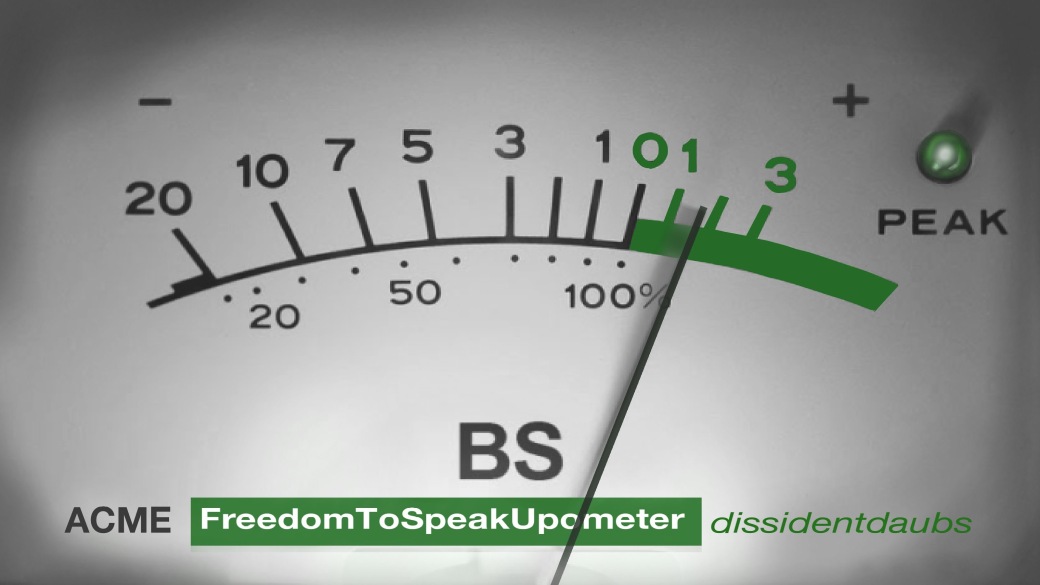