The National Guardian’s Office (NGO) costs the taxpayer £1 million a year, but what help does it give to whistleblowers in difficulties?

The CQC accepted as satisfactory a fundamentally flawed FPPR investigation report, produced without anyone speaking to the whistleblowers in question. It would have been risky for the National Guardian not to acknowledge this serious CQC failure, as the evidence of the failure lies in a ticking time bomb of a report that the trust has not yet published but will no doubt surface eventually. Nevertheless, it was the right thing to do and this should be acknowledged.

But what else has the NGO done? Events to date suggest that the NGO makes up its own rules, which fail whistleblowers.

Has Robert Francis has stayed true to his original recommendations in the Freedom To Speak Up Review report or is he supporting a watered down interpretation of his recommendations?

Lloyd Armstrong is an NHS whistleblower who was sacked in the summer of 2017 after he made public interest disclosures about patient safety and poor governance at troubled North Essex Partnership NHS Foundation Trust.

This was after unsuccessfully seeking help from the National Freedom To Speak Up Guardian in January 2017, four months after she took up post.

Armstrong approached the National Guardian for help after his local trust Speak Up Guardian refused to intervene and advised him that the HR process had to be completed before she would examine any concerns about unfairness:

“You have been suspended from work since June and so this process must be followed through and brought to an end. As the hearing is so imminent I do not want to give you false hope that the disciplinary process will be halted. As I have said to you at [sic] the telephone, at this late stage my feeling is that the Guardian Service will proceed to look at the process if you feel you have been unfairly treated once it has ended.”

Even though Armstrong was facing dismissal, the National Guardian advised that she could not take his case on because she had not yet established her procedures for handling cases.

Armstrong asked the National Guardian to invite his employer to temporarily pause proceedings against him, to allow her time to decide whether she wanted to take his case on. She refused to do so and Armstrong was subsequently sacked.

What are the National Guardians rules of procedure?

There has been much controversy about the National Guardian’s interpretation of the office’s role and responsibilities.

The 2016 CQC report on the outcome of a public consultation about the Office revealed that contributors believed that the National Guardian should protect whistleblowers from reprisal.

The CQC twisted and turned but its CEO David Behan eventually conceded that the National Guardian should challenge detriment:

However, the National Guardian later stated in case review guidance, published June 2017, that she sees the role as one of helping employers:

“Therefore, the purpose of a case review will be primarily to support NHS trusts to identify how they can improve their own processes and support for staff when raising concerns by reviewing how NHS trusts responded to such concerns.”

This represents very significant drift from the original purpose of the Office as set out in Robert Francis’ report of the Freedom To Speak Up Review.

Francis originally proposed the establishment of the Office to primarily help whistleblowers who had nowhere else to go:

“The deficiencies in the way concerns are investigated, and subsequent victimisation of individuals have been addressed in 6.4 and 7.5 respectively. What seems to be missing is any sort of external review mechanism, not to take over investigation of the concerns, but to provide a non-legalistic option to review what has been done locally, and make recommendations for further action as appropriate”

Report of the Freedom To Speak Up Review February 2015

Francis recommended that the Office should help ensure redress for patients and whistleblowers who are harmed as a result of whistleblowing governance failures. 1

Francis originally felt strongly enough to advise that the National Guardian should seek a direction from regulators if needed, to ensure such redress. 1

“Therefore cases should only be considered for possible review where there is clear evidence received in the referral that the NHS body has already responded to a concern and has failed to do so appropriately.”

This does not help whistleblowers where employers simply refuse to respond.

Moreover, the National Guardian’s guidance states that cases will be reviewed:

‘Practicable’ has the look of another escape clause.

Data obtained via Subject Access Request revealed that the National Guardian’s Office may baulk at cases which are subject to ongoing processes:

This internal correspondence by the NGO also stated:

which contradicts Robert Francis’ original aims for the Office and his explicit view that the Office should have a key role in facilitating redress for harmed whistleblowers.

I asked the National Guardian to clarify what ‘live’ cases were:

Letter to National Guardian 7 May 2017

“I have been provided with information which suggests that your office will not accept referrals on ‘live’ cases.

Should I understand from this that your office intends to wait until say, employers’ disciplinary processes against whistleblowers have concluded and have potentially resulted in disciplinary action and dismissal, before the office will consider reviewing the whistleblower cases in question?”

“ …we will initially select cases for review where there are no outstanding decisions to be made. As the trial period progresses, we will review this approach and explore whether we can effectively open up the parameters within which we will be able to accept cases for review.”

I raised concerns about this and asked if ‘outstanding decisions’ included decisions by Employment Tribunals. I have no record of any response by the National Guardian and have sought further clarification. Clearly though, if the National Guardian sits on her hands whilst Employment Tribunals proceed over many months and sometimes years, irreparable damage will be done to whistleblowers.

Neither has the National Guardian responded yet to a question about the clause in her case review guidance which says that she will not touch cases until employers have responded to whistleblowers, which therefore implies there can be impunity for employers who simply ignore whistleblowers.

What is Robert Francis’ position on the National Guardian’s role?

Armstrong complained about the National Guardian’s Office and the decision not to help him. It was investigated by NHS Improvement who found in the NGO’s favour, with the conclusion: 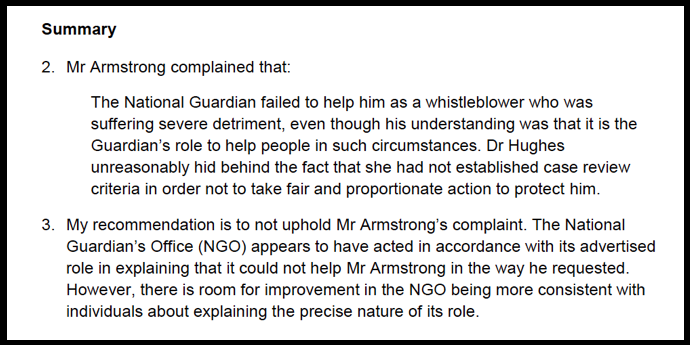 A fundamental flaw in this complaint response by NHS Improvement is that it judged the fairness and proportionality of the NGO’s actions according to its ‘advertised role’.

This is because Armstrong’s complaint was founded on a concern that the National Guardian had taken an erroneous position and wrongly interpreted her remit. Her ‘advertised role’ had been questioned as part of the complaint, but this was sidestepped by NHS Improvement.

Nevertheless, it was significant that NHS Improvement conceded:

“there is room for improvement in the NGO being more consistent with individuals about explaining the precise nature of its role”.

Worryingly, in Armstrong’s case, Francis took the National Guardian’s and NHS Improvement’s view. He concluded that the NGO had no remit for intervening:

Letter by Robert Francis to Lloyd Armstrong of 4 August 2017

However, Francis concurred with NHS Improvement that the NGO should set out more clearly the range of recommendations that it might make after undertaking a case review:

Letter by Robert Francis to Lloyd Armstrong of 4 August 2017

There appears to be no evidence that the NGO has acted upon NHS Improvement’s and Francis’ recommendation that it should clarify what type of recommendations might be made following a case review.

The NGO’s original case review guidance from June 2017 remains online with no sign of a later revision. Neither do the NGO’s supplementary guidance for referrers and FAQs provide the clarification that NHS Improvement and Francis thought it should produce. Only broad reference is made to the original Freedom To Speak Up Review report proposals.

Furthermore, on 1 February 2018 the National Guardian published a case review report which revealed that her Office looked at whistleblower cases at Northern Lincolnshire and Goole NHS Foundation Trust despite internal processes not having concluded in these cases.

This report indicates that the NGO intervened and asked questions about an internal disciplinary process in the case of a whistleblower who was subjected to counter-allegations and investigation after whistleblowing, despite the Office’s previous advice to Armstrong that it could not intervene.

Even so, in the case of the Northern Lincolnshire and Goole NHS Foundation Trust whistleblower who was subjected to investigation after whistleblowing, the NGO appeared to accept the trust’s assurance that its internal investigation into the counter-allegations:

“had looked for evidence of any malicious motive, but had not found any.”

The National Guardian gave no evidence in this report that this claim by the trust was independently weighed by her office.

Neither is there any indication of potential redress for the whistleblower for any detriments suffered.

More generally, there is also a dearth of evidence about how the National Guardian conducts her business. Strangely, her first annual report was silent on how many referrals she had received for case review, and how many of these she had accepted.

There was also no evidence in her annual report that she has collected satisfaction data from whistleblowers who have contacted her Office. This is despite the fact that she expects local Speak Up Guardians to collect such data.

Armstrong has now lodged a further complaint about the apparent inconsistencies in the NGO’s approach to whistleblowers.

He has formally submitted questions to the National Guardian’s Office on its case review activity.

He has also asked Robert Francis to explain his position more clearly:

“I would be very grateful if you could clarify to me what was in your mind when you made your original recommendation in the report of the Freedom To Speak Up Review that the National Guardian should help ensure redress for harmed whistleblowers, including through a direction by a regulator if necessary.

Please could you give some practical indications of the sort of cases and scenarios that would in your view qualify for such help from the National Guardian.”

Letter by Armstrong to Robert Francis of 4 February 2018

As more evidence of the National Guardian’s Office’s inefficacy mounts, both in terms of design and execution, will Francis rethink his Freedom To Speak Up Review recommendations?

In lawyerly fashion, he left himself some escape clauses. In February 2015 he rejected the proposal of a properly constituted Office with legal powers to protect whistleblowers. But he did leave the door slightly ajar:

“While I do not see the need to go as far as this, certainly at this stage, I do see a need for some form of external review mechanism.”

Page 168, report of the Freedom To Speak Up Review

What is finally needed to push that door open? More avoidable deaths at scale? It should not take such tragedy to usher in proper reforms.

But whilst they wait for that door to open, whistleblowers would be very glad to hear from the National Guardian exactly what she is doing for them and for patient safety.

That is of course, assuming she knows.

1 Page 168 of Robert Francis’ report of the Freedom to Speak Up Review:

The INO [National Guardian] should be authorised by these bodies to use his/her discretion to:

– addressing any remaining risk to the safety of patients or staff

– correction of any failure to investigate the concerns adequately” 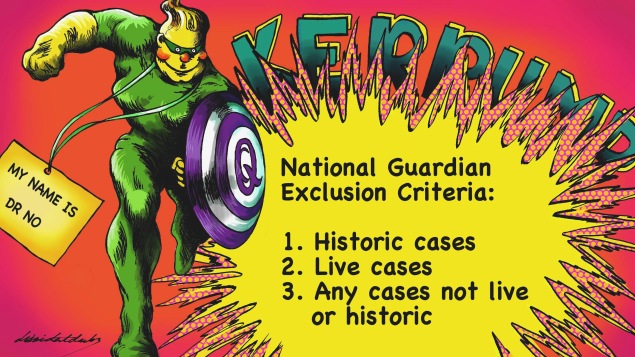 One thought on “Of arbitrariness and arbiters: The Freedom to Speak Up project three years on.”