Institutional responses to enquiries have raised questions about gaps in the criminal justice system’s governance of Diversity and the handling of Gross Negligence Manslaughter, and about the GMC’s handling of offending by registrants.

The death of six year old Jack Adcock, a child with Down’s Syndrome, under the care of Leicester University Hospitals NHS Trust and the conviction and striking off of paediatrics trainee Dr Hadiza Bawa-Garba from the General Medical Council register are controversial.

Opposing camps of a medical profession afraid of being criminalised for errors made in good faith, and bereaved families who have endured NHS cover ups, have at times bitterly disputed the meaning of the case.

Ingrained system bias against people with mental illness and learning disability must be acknowledged.

There is persistent disparity of esteem in the funding for mental health. Disrespect by the government was evident following the Mazars Review into hundreds of un-investigated deaths. NHS England managed to airbrush the issues of discrimination against people with mental illness and learning disability.

Years after the Cornwall Learning Disabilities services scandal, Winterbourne View and the report on poor physical care of people with learning disability, Death by Indifference, little has changed.

The fight that bereaved families may face against bureaucracy that may be indifferent, incompetent or unfair can be prolonged.

And it should be acknowledged that one of government’s strategies is to avoid censure of culpable, but favoured, individuals by shifting blame entirely onto systemic factors. Robert Francis was criticised for failing to censure senior figures behind the Mid Staffs disaster.

In Dr Bawa-Garba’s case, a concern has been that a junior doctor was sacrificed and there has been insufficient focus on systems issues, for which more senior figures were responsible.

I do not have a clear view on the merits of the Bawa-Garba conviction or erasure. I am not close enough to the case to properly venture opinion. I have seen no original documents nor the transcripts of the court hearings. I do not know if there are important details missing from the public record, which can often be the case.

But it is fair to ask questions.

Was it possible that Dr Bawa-Garba was more harshly treated because she was female and Black?

It is known that BME doctors suffer harsher discipline and that once referred to the GMC, they are more likely to face Fitness to Practice proceedings.

The GMC has in the past excused this as an artefact of referral patterns: employers are reportedly more likely to refer BME doctors, and the GMC in turn tends to sanction more severely doctors who are referred by employers:

It has been observed that female doctors are more law-abiding but more harshly treated by employers. This mirrors the behaviour of the criminal justice system, despite the effects on families and children when women are jailed.

Was Dr Bawa-Garba treated as fairly as a white male might have been? Such a comparator may exist. Graeme Catto a former President of the GMC gave a personal account of medical error with a fatal outcome with no sign of subsequent prosecution.

Should Dr Bawa-Garba have refused to cover for absent colleagues? Research by Middlesex University for the Freedom To Speak Up Review showed that BME NHS staff are more likely to be ignored and victimised when they raise concerns. 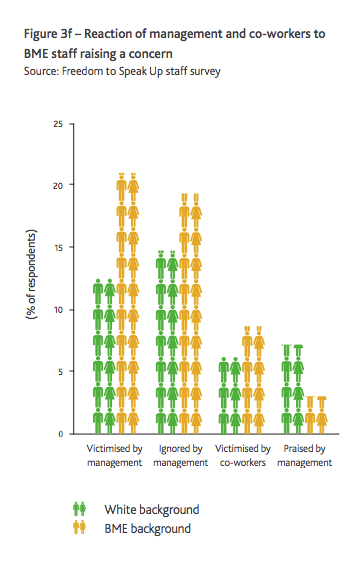 Those who sit in judgment of BME defendants in Court and BME doctors in GMC proceedings are less likely to be from BME backgrounds. An update review by David Lammy MP demonstrates that disadvantage against BME people persists in the justice system.

There is also debate about the “suitability of a lay jury to determine complex matters of professional competence” and how juries might be directed as to what is ‘grossly negligent’:

But policy swings to and fro. After the Shipman murders, a Health minister declaimed that it was necessary to:

“put an end to the idea that the GMC was a representative body for doctors.”

Some years later the GMC was forced to commission a review after criticism of suicides of doctors following GMC referral.

Charlie Massey the Chief Executive of the GMC has controversially claimed that he “had no choice” but to pursue Dr Bawa-Garba’s erasure from the register, because her conviction automatically committed the GMC to this course. There are differing views.

Is the system consistent and fair?

The Court of Appeal, Crown Prosecution Service and Criminal Cases Review commission were asked about their approach to Diversity and the handling of gross negligence manslaughter cases.

The Court of Appeal

The Court of Appeal found against Dr Bawa-Garba in December 2016 and refused her leave to appeal against the Gross Negligence Manslaughter conviction.

The Commission was established in 1995 and its job is to:

It has the power to refer cases back to the Court of Appeal. 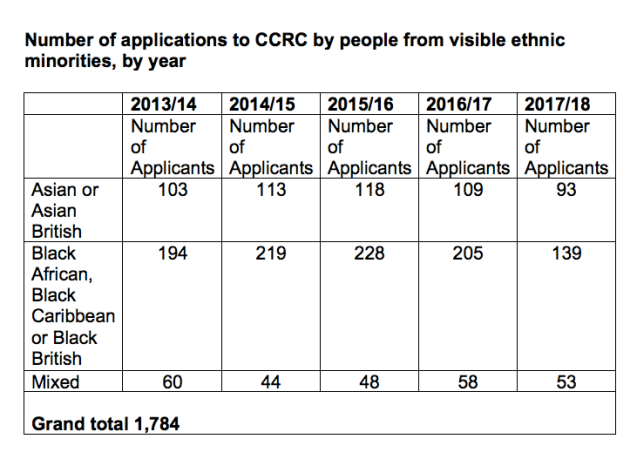 The CCRC disclosed that of a total of 7,406 applications received between 1 April 2013 and January 2018, at least 1,784 were received from visible ethnic minority applicants. 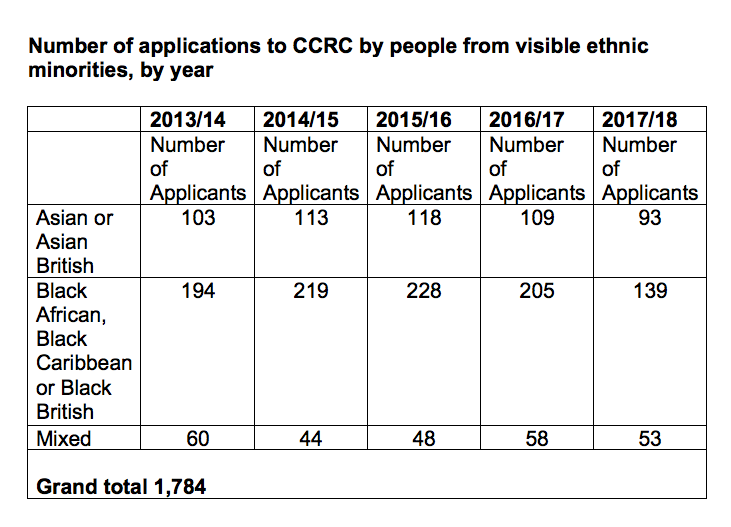 CCRC Applicant stats by ethnicity and other protected characteristics

The CCRC advised that it has referred a total of 117 cases to appeal courts of between 1 April 2013 and January 2018:

From these 117 cases that the CCRC referred to appeal courts for a fresh look, 64 previous decisions were subsequently quashed:

The CCRC said that numbers were too small to safely give a Diversity breakdown of outcomes by year: 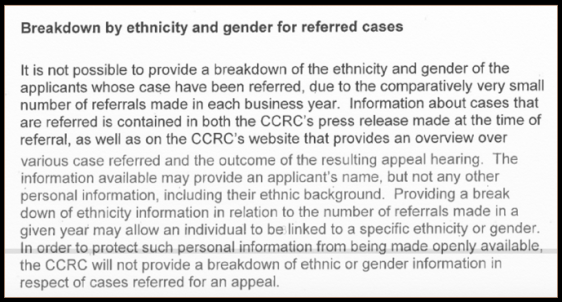 A Diversity analysis for the whole period in question has been requested.

An analysis by the Sentencing Council on a sample of 156 manslaughter cases reveal that about 10% of manslaughter sentences relate to Gross Negligence Manslaughter.

This is summary data from the Sentencing Council on sentences for manslaughter in the years 2006 to 2016.

Gross Negligence Manslaughter is handled by a specialist unit of the CPS, the Special Crime and Counter Terrorism Division (SCCTD)

The CPS denied that it held any detailed internal guidance on prosecuting Gross Negligence Manslaughter, and later cited only brief guidance from its website.

The CPS advised that it could not give me a list of prosecutions against doctors for Gross Negligence Manslaughter due to cost exemptions, as a special search for the data would be needed.

Astonishingly, the CPS later claimed that not even the SCCTD had kept central records on cases of Gross Negligence Manslaughter:

“the Crown Prosecution can confirm the Special Crime and Counter Terrorism Division does not keep its own record of the data you have requested.”

This purported lack of a central record raises questions about how the CPS is tracking its practice, and ensuring consistency of approach and thresholds for prosecution.

The British Association of Physicians of Indian Origin (BAPIO) has asked the police to consider a prosecution against Dr Bawa-Garba’s trust for corporate manslaughter.

Some may see this as a polite way of asking the criminal justice system to consider whether it effectively scapegoated Dr Bawa-Garba.

To my knowledge, there are no complete, published data on manslaughter prosecutions against doctors.

There have been periodic reviews of such cases, found by searching press archives and other records.

Ferner and MacDowell identified medical manslaughter cases between 1795 and 2005.

“Doctors were most commonly charged with manslaughter as a result of mistakes (37/85 doctors), which are errors in the planning of an action. Ten of these doctors (27%) were convicted.”

They reported an upward trend in the number of prosecutions from the 1990s, but that the conviction rate had remained stable at around 30%.

Edwards reported on more recent cases,  including that of a urologist who was jailed for Gross Negligence Manslaughter but was later allowed to practice again by the GMC.

Edwards also reported on the case of Mr David Sellu, a surgeon who successfully appealed against his conviction for Gross Negligence Manslaughter. After all that, the GMC is currently pursuing him.

It would be reasonable to expect that the GMC holds good quality, central records on manslaughter cases, given the enormity of such cases.

However, when the GMC was asked to provide information on currently registered doctors who were convicted of a criminal offence in the previous four years, and to give a breakdown of the types of offences, it replied:

“We do not hold the information you are seeking in questions 1 and 2 in a way which can be extracted electronically; this means that we would need to manually check though each case file.”

If this is correct, this raises questions about the GMC’s grip on offending by doctors, the oversight of its risk management of such cases and issues of consistency.

In July 2016 the Secretary of State appointed Charlie Massey as GMC chief executive amidst concern from many doctors: ‘Doctors embroiled in another dispute over one of Jeremy Hunt’s aides’

Now, after an outcry from a profession not previously known for radicalism, the Secretary of State has announced a a review of Gross Negligence Manslaughter in the NHS.  This will, oddly, be led by surgeon Professor Sir Norman Williams, who has served on controversial government projects such as the Freedom To Speak Up Review on NHS whistleblowing. 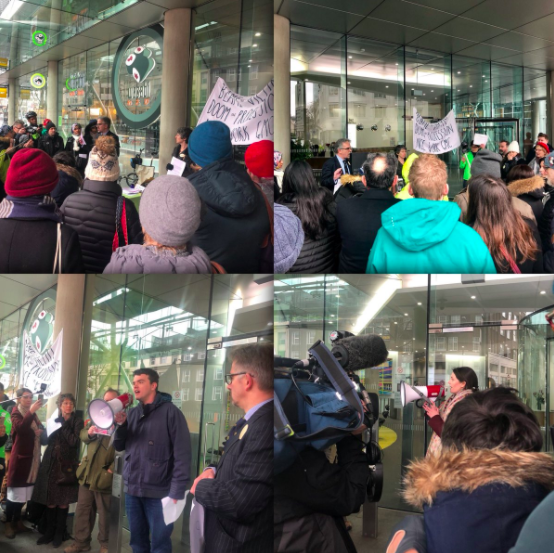 Hunt’s manslaughter review may just be another Department of Health and Social Care exercise in handling public opinion, when what is needed most is safe funding of the NHS.

The harsh punishment of honest error is hard to reconcile with the tenets of ‘just culture’, and the fear amongst doctors is understandable.

However, there has been no comparable protest about patient safety when whistleblowers are strung up. Senior doctors need to do much, much more to preserve professional freedoms and doctors’ rights to speak out without fear, as that is the other side of the coin in the Bawa-Garba case.

There has been an exchange of correspondence between the parliamentary Health Committee and the GMC, which has now been published. The Committee has expressed particular interest in issues of ethnicity:

The GMC has now disclosed via FOI that in the last five years it has not sought the erasure of one third of doctors (23 of 73) who were convicted of Sex Offences.

This contrasts poorly with its decision to seek Dr Bawa-Garba’s erasure because of errors which the MPTS found were not recklessly made.

The GMC has also admitted that it in fact has no specific policy on the handling of cases where doctors have been convicted of Gross Negligence Manslaughter. Despite the GMC chief executive Charlie Massey claiming that a conviction for Gross Negligence Manslaughter meant that GMC had no choice but to seek erasure, the GMC states in its latest response that each case must be “considered on its own merits”.

This adds further concerns about GMC arbitrariness and inconsistency.

I have shared this information with the parliamentary Health Committee:

They were originally disclosed under FOIA to the Health Service Journal, which reported the PSA’s criticisms of the GMC’s actions.

The PSA documents show that in pursuing Dr Bawa-Garba’s erasure, the GMC actively chose to disregard a relevant, prior Supreme Court decision which held that:

“An appellate court must approach a challenge to the sanction imposed by a professional disciplinary committee with diffidence. In a case such as the present, the committee’s concern is for the damage already done or likely to be done to the reputation of the profession and it is best qualified to judge the measures required to address it.”

The PSA concluded that the GMC’s argument for pursuing Dr Bawa-Garba’s erasure was “without merit”.

There has been a further exchange of correspondence with the Chair of the Health and Social Care Committee:

BMA Says No to Whistleblowers

UK Whistleblowing Law is an Ass