The track record of regulators on such matters is described.

FOI data is provided on past NHS commissions undertaken by NHS Improvement’s chosen investigator for Wirral.

It is three years tomorrow since Robert Francis published his report of the disappointing Freedom To Speak Up Review, and since Jeremy Hunt grandly promised ‘sweeping reforms to end cover up culture’.

Yet reports and evidence of NHS bullying, spin and suppression continue. In October 2017 NHS England and the Department of Health were caught out trying to bully journalists when Pulse, a periodical for GPs, reported an explosive story that the government had considered piloting a ban on walk in presentations to A&E Departments. NHS England initially denied all and the Department of Health overbearingly demanded to know when Pulse would take its story down, and it also tweeted unpleasantries. Both retreated when Pulse published an audio recording of an NHS England official which proved the accuracy of their reportage. 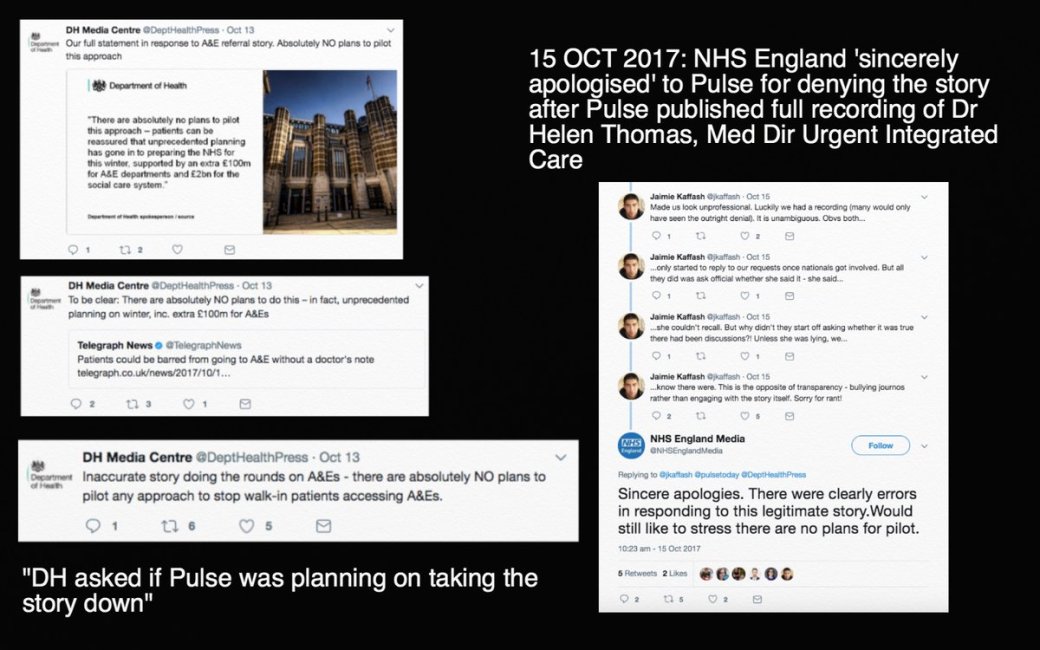 NHS Improvement indicated on 12 January 2018 that this will be the scope of the investigation:

(i) investigate concerns raised by members of trust staff in late 2017 with NHS Improvement regarding cultural, behavioural and governance issues

(ii) review the trust’s handling of a recent disciplinary case involving allegations of sexual misconduct; and

According to the Health Service Journal, there were a range of governance concerns had been raised with NHS Improvement, and a key issue was that Allison was allegedly appointed to the private health consultancy Draper and Dash without the knowledge of his trust board:

“Multiple sources confirmed Mr Allison was investigated by the chair after he was appointed to the board of digital informatics company Draper and Dash on 20 November without the knowledge of the trust’s executive team. Mr Allison arranged a meeting for trust executives with Draper and Dash managing director Orlando Agrippa. The meeting was arranged via an email from Mr Allison’s trust account but the meetings never took place due to concerns of staff.”

What HSJ did not report was that the outgoing Chief Executive of NHS Improvement, Jim Mackey had also been appointed as a non-executive director to Draper and Dash. According to Companies House, Mackey is listed as a Draper and Dash director from 1 October 2017. 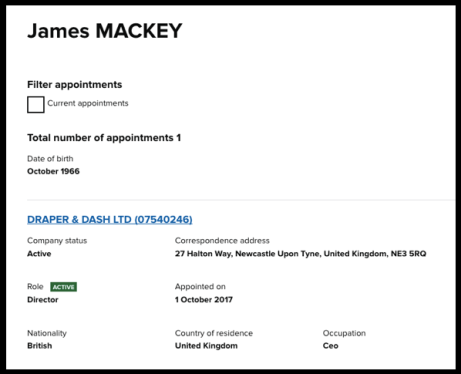 Mackey returned to his old job as Chief Executive of Northumbria Healthcare NHS Foundation Trust in November 2017. The trust’s published register of interests notes that Mackey is a Draper and Dash NED:

After readers debated Mackey’s appointment to Draper and Dash in the comments section of the HSJ article about Allison, HSJ tried to “focus people back on the issues at Wirral”, and indicated that the following statement had been provided by Mackey’s trust: 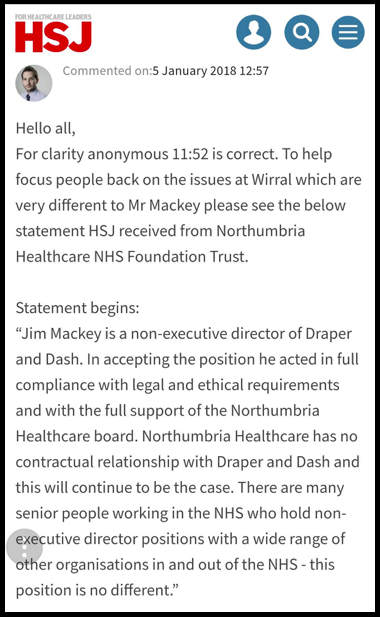 But the question of course is that whilst the current rules permit this, is it right that a revolving door should exist and should it be shut? Should private businesses benefit from the market knowledge of current or recent senior NHS officials and regulators?

And how effectively will NHS Improvement address the issues at Wirral University Teaching Hospitals NHS Foundation Trust given that NHS Improvement’s just-departed CEO is a Draper and Dash NED?

Past regulatory approaches to allegations of misconduct by trust directors

There was much concern previously about NHS Improvement’s handling of a challenging 2016 Verita report on whistleblowing governance at the Royal Wolverhampton NHS Trust.

Verita concluded that a whistleblower “was not treated fairly by the trust” and it criticised David Loughton the controversial CEO of the trust.

Deloitte’s review essentially consisted of asking trust directors some questions and reviewing documents. Explicitly, Deloitte did not seek to verify what it was told:

“We have assumed that the information provided to us and management’s representations are complete, accurate and reliable; we have not independently audited, verified or confirmed their accuracy, completeness or reliability.”

Deloitte merely observed some issues about Loughton’s style and suggested that he ‘reflect’:

Recommendation 1: “The CEO should further reflect on his personal style and in particular the potential impact his strength of character and impulsive and honest style may have on internal and external stakeholders.”

In July 2015 Monitor, a predecessor body of NHS Improvement, announced that it would investigate the trust.

This proved to consist of trust- controlled exercises: a ‘governance review panel’ assessment and a review by Deloitte of ‘governance arrangements and HR related functions’, the reports of which were published amongst the trust’s board papers for March 2016.

The Deloitte review at Derbyshire Healthcare relied on the same methodology as at the Royal Wolverhampton. Trust managers were asked for their views, without verification:

“We have assumed that the information provided to us and management’s representations are complete, accurate and reliable; we have not independently audited, verified or confirmed their accuracy, completeness or reliability. In particular, no detailed testing regarding the accuracy of any financial information has been performed.”

The Care Quality Commission has also been embroiled in controversy about its unwillingness to take action against poor directors under Regulation 5 Fit and Proper Persons. This was such that Robert Francis, a CQC NED, revisited managerial regulation in October 2016, after having rejected it in his report of the Freedom To Speak Up Review only 20 months previously: Robert Francis calls for regulation of senior managers. 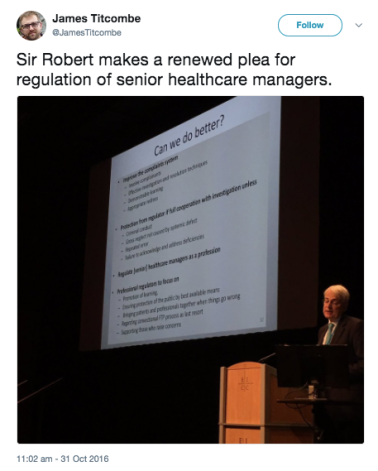 Rosie Cooper MP revealed, in a 2016 parliamentary debate about an investigation of Liverpool Community Health NHS Trust, more astonishing complicity by regulators in protecting and recycling poor managers who had suppressed whistleblowers.

A further review by Bill Kirkup  on Liverpool Community Health NHS Trust was published on 8 February 2018, which concluded that trust managers covered up and caused avoidable harm to patients from mismanagement:

“[incident] reporting was discouraged, investigation was poor, incidents were regularly downgraded in importance, and action planning for improvement was absent or invisible”

“Serious incidents causing patient harm were not reported, not investigated and lessons not learned. The result was unnecessary harm to patients.”

Kirkup also criticised serious, recurrent failure by oversight bodies and regulators such as the NHS Trust Development Authority and CQC to step in quickly enough. Kirkup expressed much scepticism about inconsistent regulatory judgments:

“We found it impossible to understand how such different conclusions [by CQC] could be reached about the same service over such a short period.”

Kirkup added to the already serious criticisms of CQC’s handling of Regulation 5:

“The Department of Health should review the working of the Care Quality Commission fit and proper person’s test, to ensure that concerns over the capability and conduct of NHS executive and non-Executive Directors are definitively resolved and the outcome reflected in future appointments. Action: Department of Health.”

Arising from Kirkup’s review, Steven Barclay the new Minister of State for Health gave the following undertakings in parliament on 8 February 2018, which hint at some form of barring scheme:

“Secondly, one recommendation is specifically for the Department of Health and Social Care, as set out in paragraph 6.5 on page 64. This relates to a review of CQC’s fit and proper person test. I intend to discuss the terms of that review with the hon. Member for West Lancashire and will appoint someone to undertake that review within the coming days. I believe that review will need to address the operation and purpose of the fit and proper test, including but not limited to: where an individual moves to the NHS in another part of the United Kingdom; where they leave but subsequently provide healthcare services to the NHS from another healthcare role, such as with a charity or a healthcare company; where differing levels of professional regulation apply, such as a chief executive who is a clinician compared to one who is a non-clinician; where there is a failure to co-operate with a review of this nature and what the consequences of that should be; and reviewing the effectiveness of such investigations themselves when they are conducted. I will be pleased to hear the views of the hon. Member for West Lancashire, and those of the Health Committee, on these issues.”

This is a significant development as to date, the CQC has explicitly and repeatedly refused to operate FPPR as a disclosure and barring scheme.

NHS Improvement has announced that its investigation on Wirral University Teaching Hospital NHS Foundation trust will be carried out by Carole Taylor-Brown, whom it describes as:

“an experienced independent investigator with NHS experience, who has undertaken numerous investigations of this type, working alongside multiple agencies. Carole was previously the Chief Executive of NHS Suffolk and NHS Suffolk East PTC.”

Her joint report with Prof Pat Troop was published by Colchester in December 2014. It concluded that there had been no fiddling or bullying:

“There is no evidence to support that there was at any time, an instruction to junior staff (or others) to manipulate data or make inappropriate adjustments to cancer data”

“There is no case to answer for any individual….in respect of alleged bullying and harassment.”

A detail from this report is that the internal trust investigator who carried out an initial investigation into the fiddling concerns was a Mr Agrippa, whose LinkedIn details state that he was formerly Colchester’s Director of Business Informatics, and is now CEO of Draper and Dash.

“My practice has two principal areas of focus:

Mediation and Investigations involving senior people in the workplace

alongside which, I undertake some strategic commissions relating to organisational development and design.”

“I offer specialist, discreet, independent mediation and investigation services, principally for clients where the matter concerns senior people, inter-Board /organisational relationships or, where there are specific organisational/personal sensitivities. I also provide these services where regulatory intervention or oversight or other external stakeholder scrutiny is evident for the organisation concerned.”

The company’s website gives details of some Taylor-Brown’s former clients, including NHS bodies.

The bodies listed as clients of Tamarix People Limited were asked for details of services they had purchased, and a list is given below.

To give an idea of the sums involved when the NHS buys in such services, the costs of these services are also listed. Relatively speaking, they are modest compared to the overall NHS consultancy bill.

This list of NHS bodies that have purchased Taylor-Brown’s services will be updated as more information becomes available:

NHS Improvement itself has been asked for any history of past transactions with Carole Taylor-Brown’s companies.

The regulator has failed to respond within the statutory deadline and is now overdue.

UPDATE 11 February 2018: Whilst awaiting NHS Improvement’s response, I have learned of this document, which appears to be the report of an investigation on alleged bullying at Worcestershire Health and Care NHS Trust by Carole Taylor-Brown in 2015. The report states that this investigation was commissioned NHSTDA, one of NHS Improvement’s predecessor bodies.