Officialdom’s absurdities in keeping whistleblowers at bay are endless.

The latest question about the National Freedom To Speak Up Guardian arises from personal data disclosed to an NHS whistleblower, under the Data Protection Act.

This disclosure included internal correspondence by the National Guardian’s team which indicated that ‘live’ whistleblower cases may not be accepted for review.

That is pretty ludicrous, especially bearing in mind that so-called ‘historic’ cases have already been barred. 1 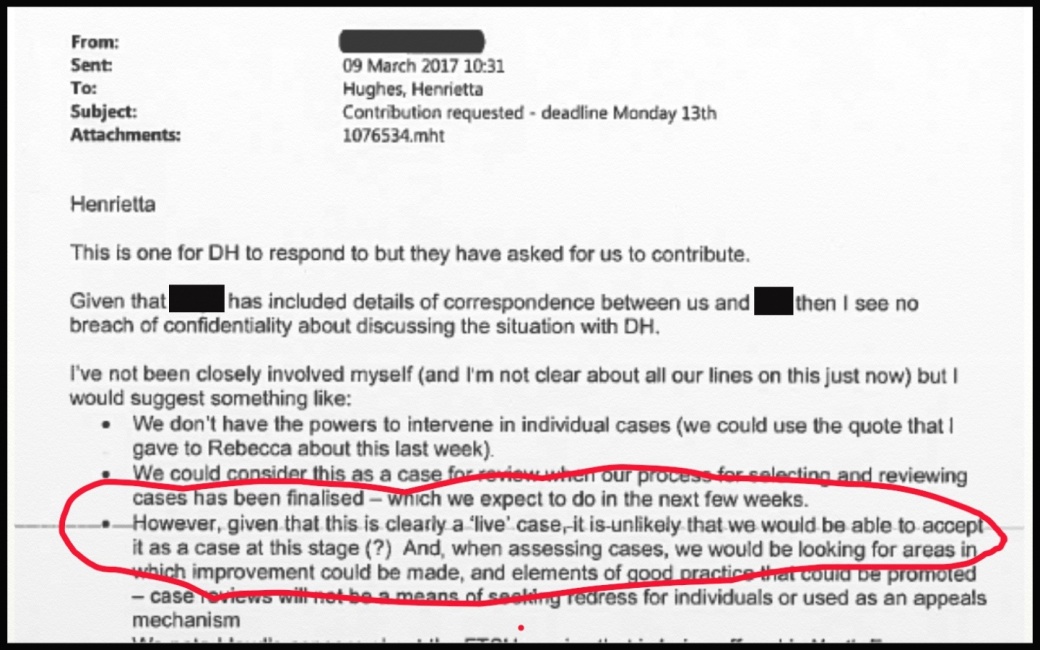 You will also see from this disclosure that the Department of Health and the National Guardian conferred about the response to the whistleblower.

There has already been plenty of other marble-rolling by the National Guardian’s office, CQC and the Department of Health. For example, they all made an unfounded claim that the National Guardian has no remit to intervene at all in individual cases, which has now been withdrawn. 2

I have asked the National Guardian to clarify how she defines ‘live’ cases.

Does she intend to wait until whistleblowers are neck deep in detriment, having been maliciously disciplined, vexatiously referred to professional regulators or pushed out onto the dole?

Once whistleblowers have been sacked, what exactly could she do to fulfil her remit – as set out in the Freedom To Speak Up Review – to ensure that the NHS provides “…redress to any patients or staff harmed…” 3 by poor whistleblowing governance?

Perhaps a referral passing the sacked whistleblower to the ineffective NHS whistleblower employment support scheme, that is explicitly designed not to provide jobs?

Why is the National Guardian’s office making up silly rules as it goes along?

The Freedom To Speak Review clearly acknowledged that early intervention – and resolution –  was important in preventing serious harm to whistleblowers. 4

Insistence that cases can only be accepted once they are no longer ‘live’ is a noxious recipe.

But no doubt it would be music to the Department of Health’s ears.

Whistleblowers wanted: Dead, or not Live.

1 Robert Francis shut many so-called ‘historic’ whistleblowers out of justice through his report of the Freedom To Speak Up report:

“The INO should not be tasked with reviewing, let alone investigating, historic cases.”

“The INO should not be expected to review historic issues.”

“Finally I recognise that some of those who have contributed so constructively to the Review will feel that their own personal issues have not been addressed. This was perhaps inevitable given my remit, but I have to observe that in some of their cases the contention has endured over such a long time, and the issues have become so complex, that the most rigorous inquiry devoted to each such case would not have been able to resolve matters for those involved. For this reason I doubt that any form of public inquiry of the sort demanded by some would do more than raise expectations only for them to be dashed. I hope, however, that all who have contributed to this Review by Chapter 10 – Conclusion 197 taking the difficult step of sharing with me their sometimes harrowing experiences will receive some consolation from the knowledge that they have informed the lessons identified in the report and made a significant contribution to ensuring that others will avoid suffering the same consequences in future.”

The National Guardian has now defined ‘historic’ as employment in the NHS over two years from the point of referral to her office:

“…the NGO will review cases referred to it by NHS workers who have been employed in the NHS for a period of up to two years prior to the point they are referred to the NGO for review.”

“Through the NHS Constitution it is made clear that workers are expected to exercise their right to raise concerns as early as possible.”

“The lesson I drew from the evidence was that it is vital that cases are handled well and quickly. The more issues can be ‘nipped in the bud’ by establishing facts early on, with a degree of independence if necessary, and by communicating better at all stages, using mediation if needed, the greater the likelihood that there will be a successful outcome.”

3 thoughts on “Whistleblowers Wanted: Dead, or not Live”