The first National Guardian Eileen Sills, was appointed in January 2016 but had resigned by March 2016 before she had taken up post.

When asked about her opinion on UK whistleblowing law, the Public Interest Disclosure Act (PIDA), Sills revealed the decorative nature of the Office by replying that it was too soon to tell.

Although clearly unbeknown to Sills, PIDA had in fact been in place for almost twenty years.

The Department of Health and Social Care has been keen to spin that Sills’ replacement, Henrietta Hughes, is a front line GP.  Thus conveniently overlooking that Hughes was an NHS England Medical Director in the London area.

There was a testy exchange about this in parliament, between the excellent Philippa Whitford MP and the then Under Secretary of State for Health Ben Gummer during the debate on badly mishandled whistleblowing at Liverpool Community Health NHS Trust.

An NHS England Medical Director is not a natural choice for a confidante and defender of the front line.

Of great concern regarding transparency and tone, Henrietta Hughes’ twitter account from her previous existence, under the handle @pienchenlama, was deleted around the time that she was appointed as National Freedom To Speak Up Guardian.

All those smiling group selfies and chatty, friendly encounters with fellow senior NHS managers such as David Nicholson the former CEO of the NHS were scrubbed.

Fragments and shadows remain of what was:

Smiles and selfies had been a theme: 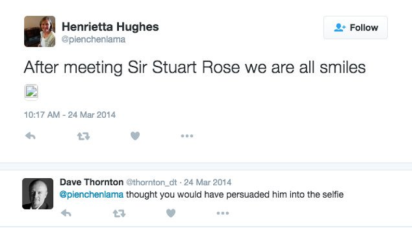 Indeed, we know that the National Guardian is so keen on smiles that she made it compulsory in her previous role. The specifications were precise:

Hughes even gave a press interview about the importance of smiling when she took up post, resulting in some derisive press headlines and workforce responses.

Lots of smiles and selfies. And mutually reinforcing claims of culture change, which to many is not apparent:

We have already seen the painfully mechanical WRES Communications Strategy, its remarkable cache of stock tweets aimed at pumping out Good News.

What of the National Guardian’s own social media policy? An enquiry has resulted in this disclosure:

Ironically, this policy acknowledges that deleting tweets is not transparent:

And how does the National Guardian intend that her team should deal with dissent? 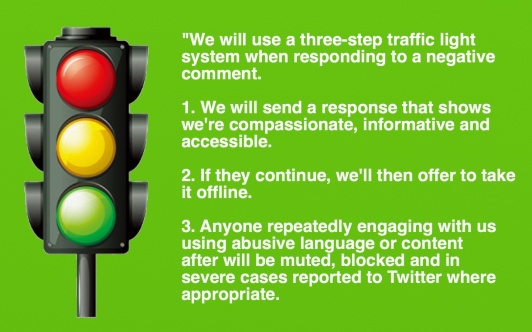 There is little reflection implied by these few lines. It is implied that ‘negative’ comments are de facto wrong, unjustified and undesirable.

It seems literally unthinkable to the National Guardian and her staff that the Office itself might need to take criticism on board.

An ironic state of a affairs for an entity whose raison d’être is to ensure that the workforce will be heard when it raises concerns.

Instead of genuinely championing the value and energy of dissent, the Office at its heart simply has tired old NHS managerial inclinations to stifle and suppress.

What will incur sufficient ire to warrant a twitter block by the National Guardian’s office? Quite a lot it seems:

Well, that might spare the National Guardian and her staff the inconvenience of unsmiling whistleblowers who continue to be harmed, traduced and starved out by her masters.

But it won’t do much to achieve the Office’s social media policy aim of:

“Furthering the conversation about speaking up”

As for her Office’s purported independence, her social media policy shows that she intends to stay on message and with the crowd:

And patients, where do patients feature in the National Guardian’s grand scheme?

A search of the National Guardian’s handbook gives this result:

Get with the programme.