The one key thing that the British establishment tries to avoid when dealing with whistleblowers is the investigation of their concerns.

Investigation may force other undesirable consequences, such as transparency and accountability.

The vital thing that the new EU whistleblowing directive offers is the compulsion of follow up and proper handling of whistleblowers’ concerns.

The EU whistleblowing directive passed an important stage in January.

The Greens were the prime movers in pushing for the directive. They have produced a digestible assessment of the directive’s strengths and areas that need further work.

However in June 2018, Andrew Griffiths MP then BEIS minister submitted this explanatory memorandum by his department to the parliamentary European Scrutiny Committee. It  poured cold water on the EU directive:

The memorandum laughably claimed that UK whistleblowing arrangements are advanced:

“The UK has one of the most advanced systems of whistleblowing protection in the EU.”

and that there was no need to adopt the EU directive.

There was a crucial dishonesty underpinning the BEIS memorandum.

It tried to argue that the labyrinthine and ineffective system of UK ‘Prescribed Persons’, under the Public Interest Disclosure Act (PIDA), represented a satisfactory equivalent to the EU directive proposals for investigation of whistleblowers’ concerns:

BEIS sneakily tried to conflate whistleblowers’ “reports” – that is whistleblowing disclosures – with statistical activity reports by Prescribed Persons, when they are entirely separate things.

As the government department in charge of PIDA, BEIS would know that Prescribed Persons are not compelled by PIDA to investigate whistleblowers’ concerns.

There are many hundreds of Prescribed Persons and they are a very mixed bag. Some are not even regulators and have no powers at all.

The only legal duty place upon Prescribed Persons is to receive, record and annually produce very superficial statistics on whistleblowing disclosures:

There has been insufficient training for Prescribed Persons. Some do not even appear aware that they have that role. FOI data last year showed that many do not understand or fulfil their basic duties:

Prescribed Persons or the Pretence of PIDA. How UK whistleblowers are ignored

In short, the Prescribed Persons system is a Sir Humphrey Special, a master work in convoluted obfuscation.

Nonetheless, BEIS remains defiant. Despite government spin about possible changes to UK whistleblowing law following the huge scandal of hundreds of unnatural deaths at Gosport War Memorial Hospital after whistleblowers were silenced, BEIS advised in an FOI disclosure of 18 February 2019, Reference FOI2019/01024, that it had no plans to change the Prescribed Persons system. BEIS pointed to some very tokenistic twiddling at the edges as the justification for its continued inaction:

In addition to BEIS’ sleight of hand, the Department of Health and Social Care is also misleading the bereaved families of the Gosport victims.

At a townhall type event in January, the families were handed an information pack consisting of ‘good news’ documents from various agencies about lessons learnt.

This included material claiming improvement in NHS whistleblowing governance, which cited the lamentable Freedom To Speak Up project  as evidence of progress.

I have also been sent a copy of a letter by Caroline Dinenage Minister of State for Care and Gosport MP to a bereaved family member, which also makes dubious claims about progress:

A key claim by Dinenage is that the National Guardian has stepped up activity on how concerns are dealt with:

This is unexpected because recent FOI data showed that the National Guardian does NOT bother to track whether NHS whistleblowers’ concerns are addressed:

I wrote to parliament about this in September 2018:

Letter to parliament: UK government does not track whether whistleblowers’ concerns are addressed

I have now asked Caroline Dinenage for information regarding her claims that the National Guardian has taken a more active role.

See website under construction Victimsofgosport.com by the family of Elsie Devine who died at Gosport War Memorial Hospital.

Spinning death at Gosport: The Department of Health and the National Guardian 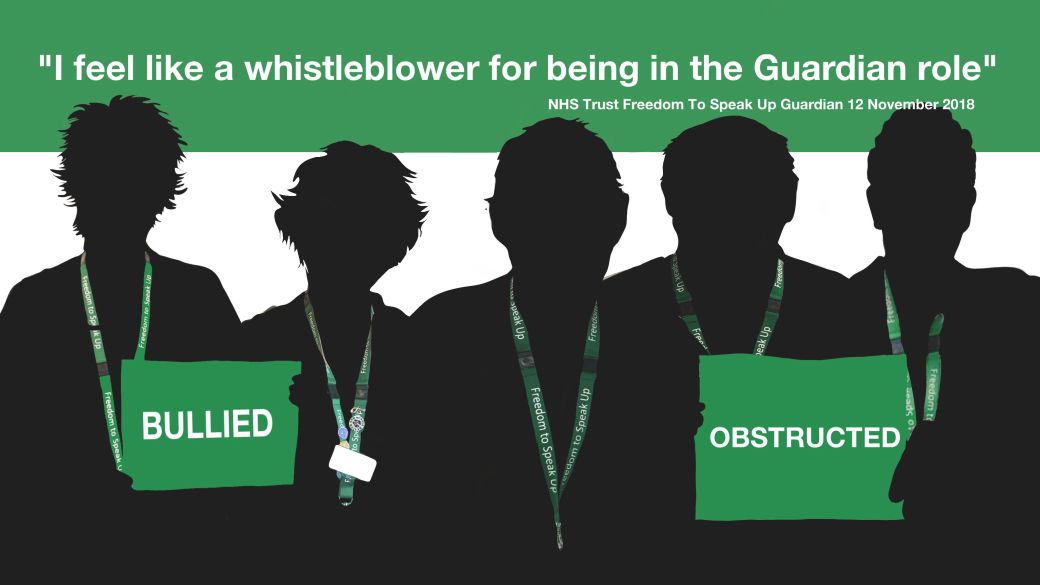