The spectacle of the Health and Social Care Committee’s hearing on the Kark Fit and Proper Person Review approaches. It will be interesting, but surprising if it results in real change.

The reality is there is one rule for workers and another for the executive classes. NHS Providers is unsurprisingly, batting hard for the powerful and resisting the creation of a disbarring body along those lines:

Despite the faux lamentation by senior officials when cover ups and whistleblower reprisal are exposed. The truth is, many privately support such behaviour and or protect fellow club members.

Jo Williams controversial former CQC Chair was recycled to the NHS as a non executive director of Alder Hey Children’s NHS Foundation Trust, and was recently appointed as its Chair:

An FOI response by Alder Hey of 21 February 2019  about William’s recycling has disclosed that the great and the good provided her with references as follows:

I do not know who these individuals are but have looked for possible candidates.

Who could be the “current chair of a health Think Tank”?

I asked three prominent health Think Tanks if their Chairs, all of whom are former Department of Health civil servants, had provided a reference for Jo Williams.

The Health Foundation did not think it came from them.

The Nuffield Trust has not yet replied.

The Kings Fund staff advised that they had forwarded my query to their Chair, Sir Christopher Kelly KCB former Permanent Secretary of the Department of Health, who has not yet replied.

However, according to a CQC announcement of 7 September 2012,  Kelly said nice things about Williams upon her resignation from the CQC after scandal:

I wonder if the victims of the Winterbourne View care scandal and their families would agree with Kelly.

The Serious Case Review on Winterbourne View gave a disturbing account of CQC’s failure to listen to whistleblowers who raised the alarm on gross abuse. It concluded bluntly: “…the apparatus of oversight across sectors was unequal to the task of uncovering the fact and extent of abuses and crimes at the hospital.”

Of note, Kelly was appointed by Gordon Brown in 2007 as the Chair of the Committee on Standards in Public Life (CSPL). In 2009, as CSPL Chair he gave evidence to the Public Administration Select Committee for its inquiry on leaks and whistleblowing in Whitehall:

Kelly also produced this 2013 report on standards on public life, to which Williams was a contributor:

Who could be the past Department of Health Minister who gave Jo Williams a reference?

Could it be Lord Norman Warner?

According to FOI data, Norman Warner has provided a reference for another NHS trust director in recent years.

Who could be the university Vice Chancellor who provided a reference?

Could it be Professor Trevor McMillan, the Vice Chancellor of Keele University, where Jo Williams was appointed as Pro-chancellor last autumn? 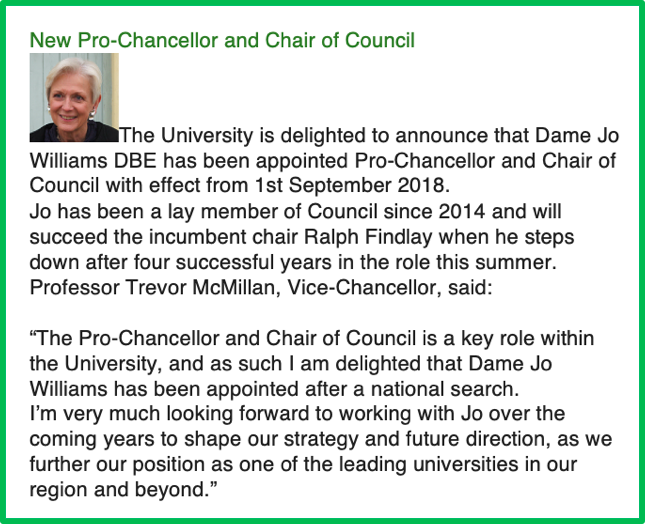 Who was the current NHS trust chair who provided a reference?

Can anyone think of a current NHS chair who has worked closely enough with Williams to provide a reference?

The Department of Health and Social Care’s masterly inertia

Whoever Williams’ referees were, it does not change the fact that under her leadership, the CQC was repeatedly and very seriously criticised by parliament for poor performance and ill-advised, unsafe management decisions:

Nor does it change the fact that this is what the Mid Staffordshire Public Inquiry concluded about the senior leadership of the CQC, when Williams was CQC chair:

Stephen Hammond Minister for Health, who inherited the Kark FPPR Review from his predecessor Steve Barclay, was asked if he would permit the conflict of interest arising from CQC’s handling FPPR referrals on Williams.

The DHSC naturally washes its hands:

But do your best to keep a straight face when you tune into the Committee hearing next week on the Kark report.

1)Evidence from myself and two other NHS whistleblowers to the Health and Social Care Committee for the Kark hearing, which includes a critique of the Kark FPPR Review report:

2) Kark got his sums very wrong on numbers of whistleblowing cases and what is much more important, the Department of Health and Social Care allowed it to be published:

3) An account of how NHS Improvement recently employed a trust director who had been found to have seriously harmed a whistleblower:

There has been no response on this matter so far from Dido Harding, NHS Improvement’s Chair, who will be giving evidence to the Committee on 12 March, and is in charge of deciding whether Kark’s recommendations will be accepted.

4) Whistleblowers in Their Own Words: What’s wrong with UK whistleblowing law and how it needs to change

5) What could a new whistleblowing law look like? A discussion document

2 thoughts on “Another turn of the Magic Roundabout: Jo Williams’ referees”