For the last few months the Orwellian scandal of the NHS hunting down a whistleblower in the Health Secretary’s constituency, West Suffolk, has dripped out painfully.

We have heard of astonishing coercion against staff for fingerprints and handwriting samples.

And we are now approaching the heart of the grotesque heavy handedness – the cover up of widely held concerns about a trust doctor’s fitness to practice and an attempt to bury whistleblowers.

There is very serious concern that behind the faux contrition after being rumbled, the trust continues to grind its whistleblowers into the dust, a classic scenario.

Under press scrutiny, Trust directors lost their head. They dared to claim that there was central approval for their witch hunt, and that the centre allegedly considered that the trust’s oppressive actions constituted “clear reasoning” and “good practice”.

The National Guardian lost her head and her Office fingered NHS Improvement by social media:

NHS Improvement has been stony silent and appears to have enforced omerta, as the trust has now fallen silent too. The trust is well overdue on an FOI request about who at the centre approved the whistleblower witch hunt.

The CQC has dished out a punishment beating by stripping the trust of its ‘Outstanding’ rating and casting all manner of aspersions on the trust directors’ ability to engage staff and ensure quality. CQC also made findings about failure by the trust Freedom To Speak Up Guardian.

Winding back a bit, many had noted that the trust CEO Steve Dunn was fond of sporting a Freedom To Speak Up lanyard. The National Guardian’s Office was moved to tweet thanks to him for “showing” his commitment to Freedom To Speak Up. 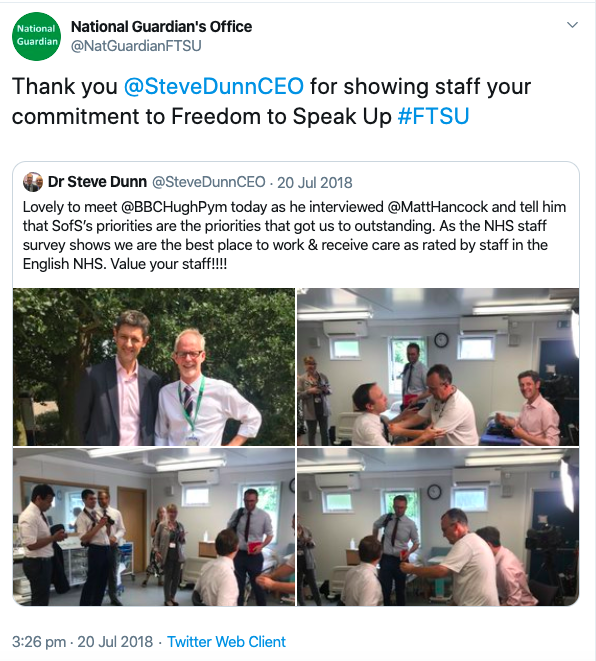 An additional search now reveals that Henrietta Hughes the National Guardian in fact visited the trust in January 2018 and praised its culture.

The minutes of a trust board meeting 1 Dec 2017 noted the visit:

“Jan Bloomfield [then Director of HR] explained that the 5 o’clock club was where the organisation talked about leadership and quality improvement, and anyone with an interest was welcome to attend. The Trust was trying to cover a wide range of subjects and this was an opportunity for people across the organisation to connect. There were some excellent speakers for next year and the aim was to link the programme with what WSFT was trying to achieve as an organisation. Dr Henrietta Hughes would be speaking on 11 January”

Inevitable grinning selfies of Dunn and the trust Freedom To Speak Up Guardian with Henrietta Hughes were tweeted: 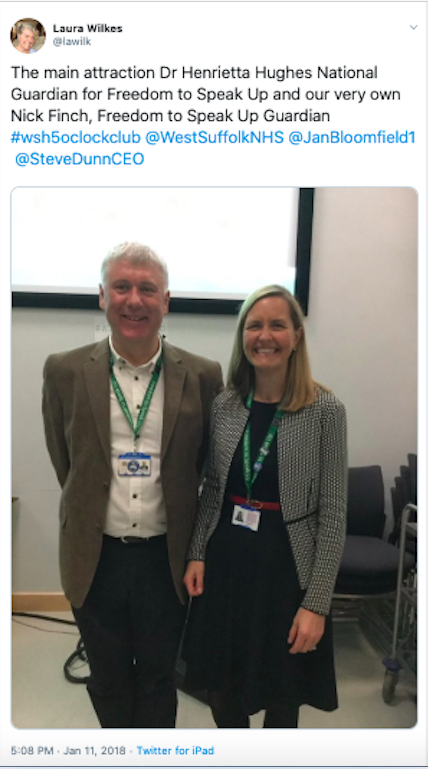 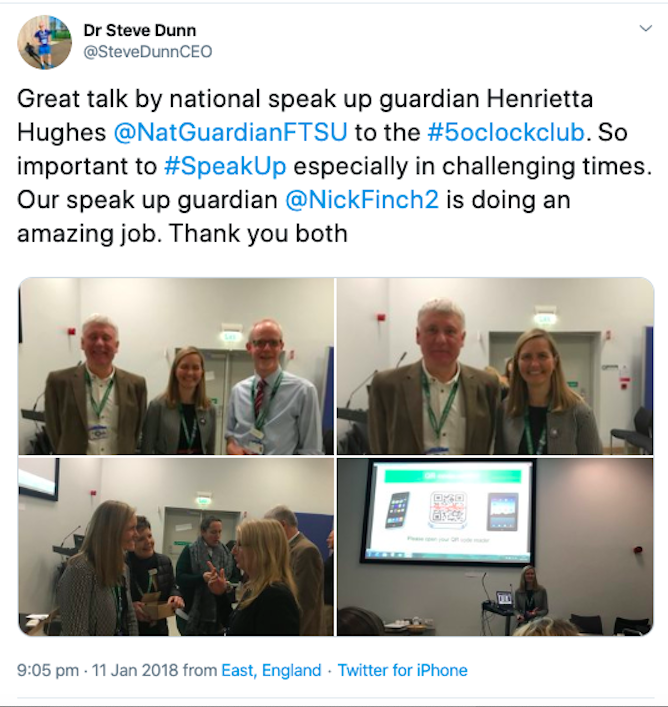 The trust capitalised on the visit with the following report in its local newsletter:

“Following her visit, Dr Hughes kindly wrote to the trust to thank us for hosting her. Here are some key comments from her letter:

“It is striking that you adopted the vision of speak up for the purposes of quality improvement well before it was mandated and everyone I spoke with told me the same, that they felt valued and that they were encouraged and supported to speak up”. 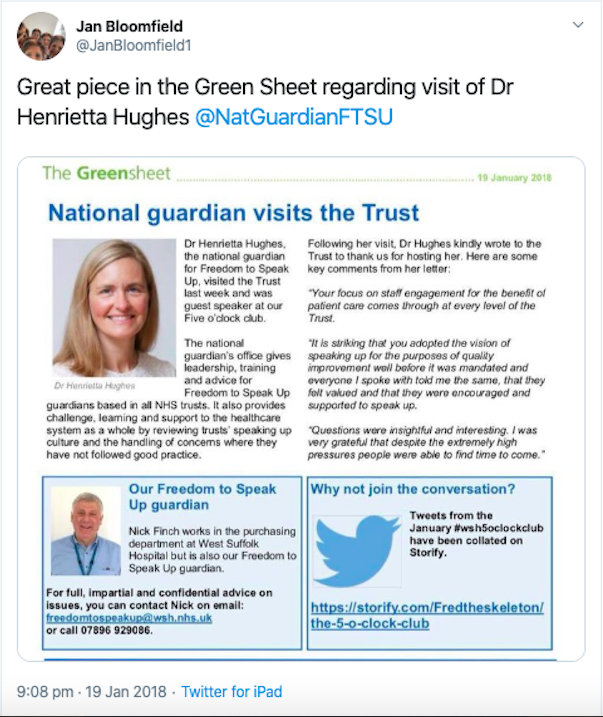 Other similarly dismal good news output by the trust, exploiting the Freedom To Speak Up branding, can be found below.

And that campers, is exactly what the Freedom To Speak Up project was devised for by the government. It is but a paltry confidence trick.

Accept no substitute for real law reform and genuinely effective enforcement infrastructure, and certainly not the synthetic air kissing road show that is the National Guardian’s Office. 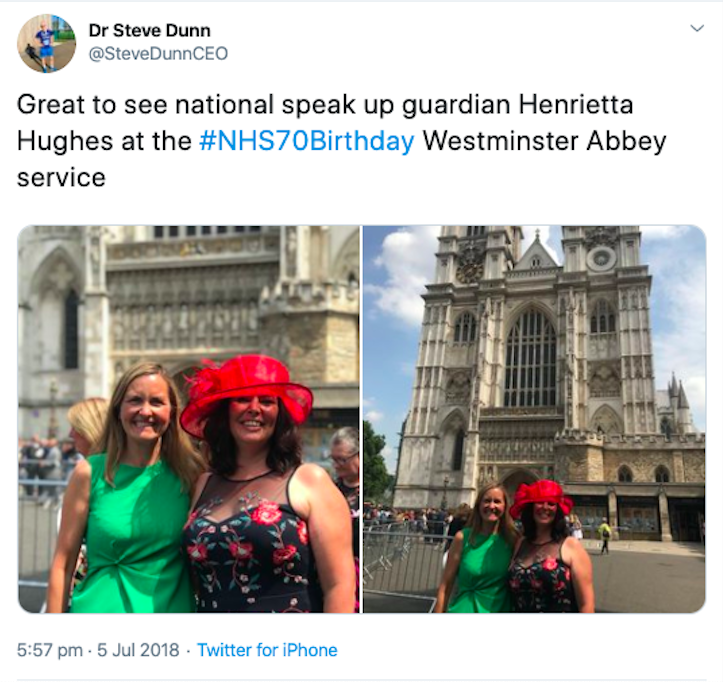 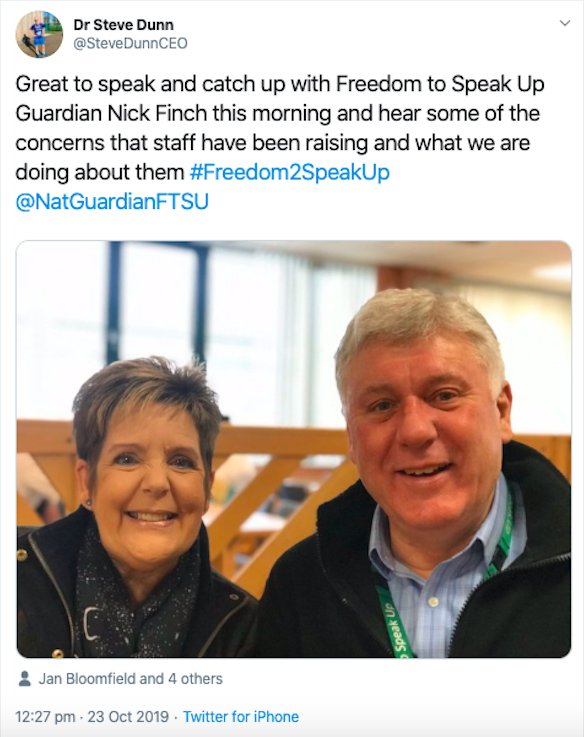 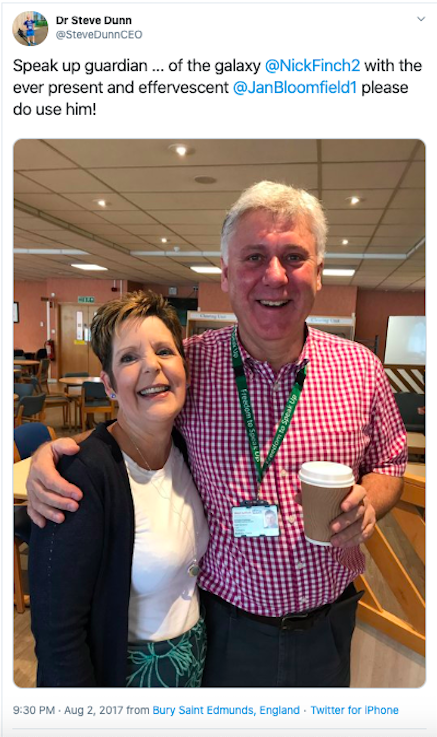 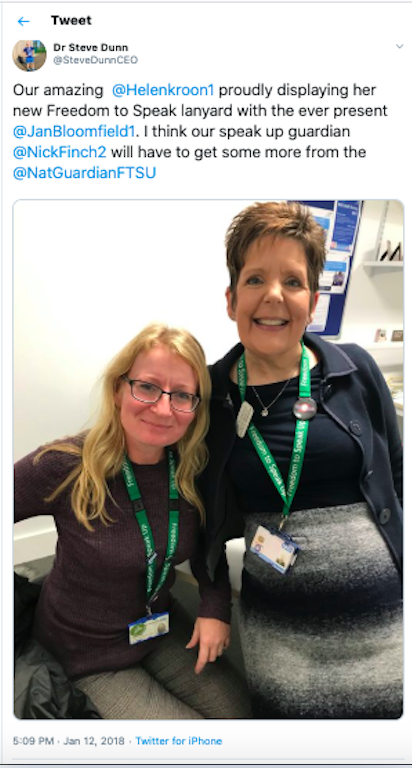 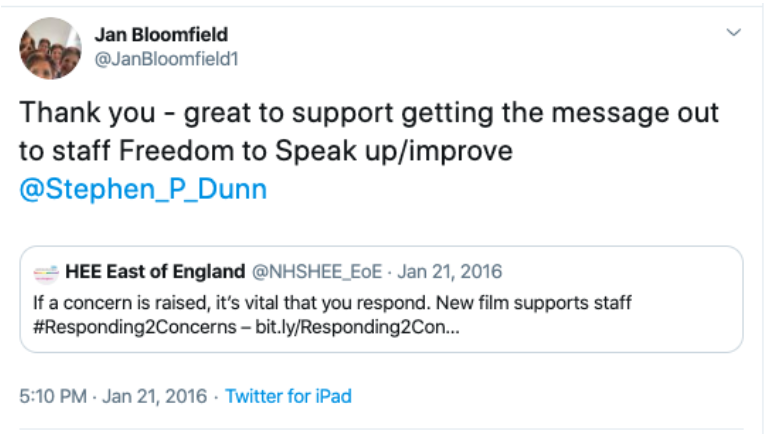 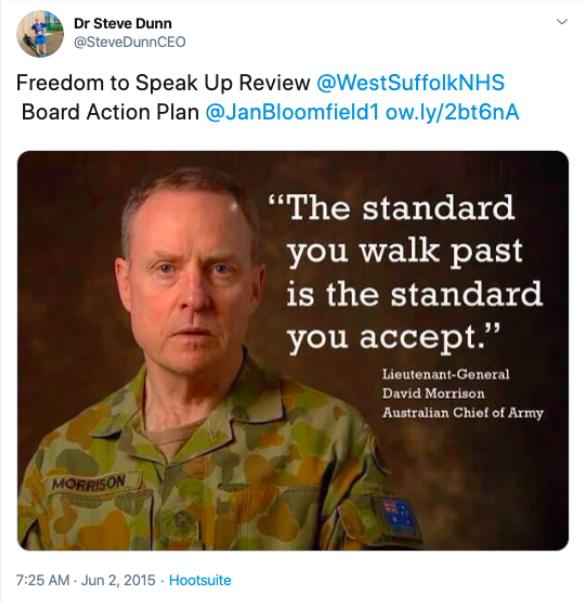 A portrait of ineffectiveness: Internal whistleblowing champions in their own words

Prescribed Persons or the Pretence of PIDA. How UK whistleblowers are ignored 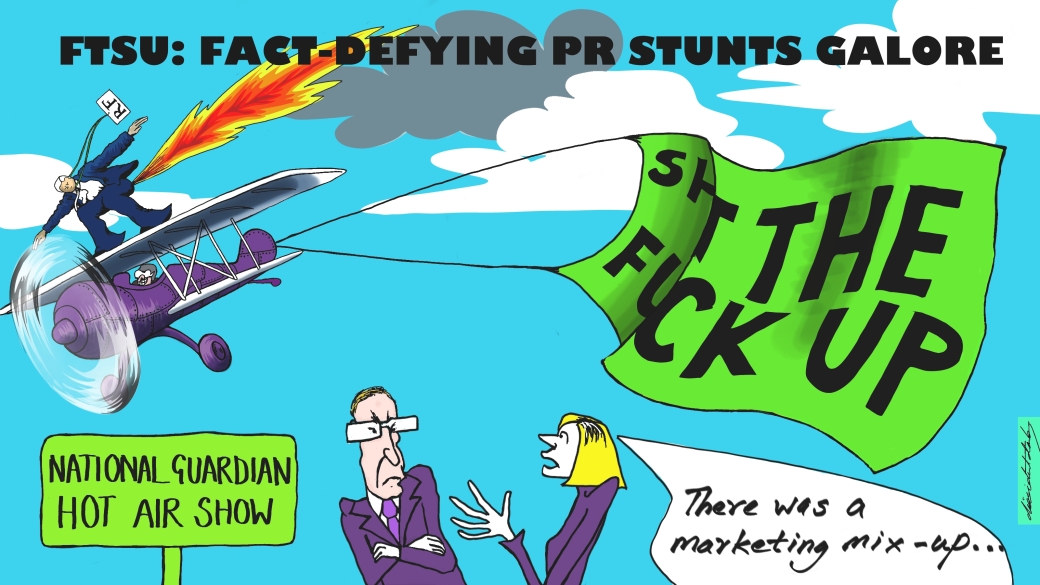