The Civil Service Code 2006 introduced a model of internal nominated officers with whom concerns could be raised:

‘16. If you have a concern, you should start by talking to your line manager or someone else in your line management chain. If for any reason you would find this difficult, you should raise the matter with your department’s nominated officers who have been appointed to advise staff on the Code.’

The recent case of Ministry of Justice (MoJ) whistleblower Kathryn Hopkins illustrates the ineffectiveness of the model: she made public interest disclosures to an internal MoJ nominated officer, but the MoJ later denied this in Court.

The Employment Tribunal had to consider whether the whistleblowing officer had colluded or had been intimidated into supporting the MoJ’s false narrative.

The Tribunal chose to believe the whistleblower.

“97.The respondent does not accept that the claimant said the following to Ms Lloyd, which comprise the protected disclosures 6g-6l:

97.1. That there had never been any robust evidence that the SOPT worked and that oft-repeated claims of efficacy had been made based on little or no evidence. [PID 6g]

97.2. That the research should have been published immediately after the peer review in 2012. [PID 6h]

97.3. That sexual offences committed since February 2012 may have been prevented if the SOTP had been halted in February 2012. [PID 6i]

97.4. That NOMS and CSAAP were covering up the research by subjecting it to continuing and invalid criticism. [PID 6j]

97.5. That the claimant was being bullied in order to stop her from pursuing the publication of the research. [PID 6k]

97.6. That there was a serious breach of research ethics by reason of the endless running and re-running of the research results which was done in order to try and reverse or minimise the findings which was part of the cover-up. [PID l]

Nevertheless, we find on the balance of probabilities that the claimant did make these extra observations to Ms Lloyd. They are consistent with what she was repeatedly saying to everyone. Although Ms Lloyd does not specifically remember the claimant saying those things, the claimant does remember. Given the overwhelming amount of detail with which the claimant was more familiar than Ms Lloyd, we think on balance the claimant’s memory is more likely to be reliable on this point.”

However, although Hopkins was judged to have made genuine, vital public interest disclosures about the ineffectiveness of the national Sex Offender Treatment Programme, and to have suffered reprisal in consequence, she lost her case because her claim was judged to be have been filed out of time. Such is the weakness of current UK whistleblowing law and governance.

Her case was covered by the Times:

Another case which starkly illustrates the uselessness of internal whistleblowing models, when the stakes are high, is that of the head of whistleblowing at Barclays, who Private Eye reported was gagged and left under mysterious circumstances.

Internal whistleblowing champions in the NHS

The Head of HR at the then Department of Business, Innovation and Skills steered the Freedom To Speak Up Review on NHS whistleblowing.

The civil service model of internal whistleblowing officers (which had not been properly evaluated – more of that another time) was parachuted into the NHS as ‘Freedom To Speak Up Guardians’.

Robert Francis, the government’s frontman peddled the myth that it was an innovation.

At the National Guardian’s first national conference in March 2017 he told star-struck Guardians they were “pioneers”.

This false claim was flatteringly repeated by Public Concern at Work (now rebranded as Protect), whose head of legal had taken up a job at the National Guardian’s office:

Evidence of the ineffectiveness of the Freedom To Speak Up project continues to accumulate, despite the frantic spinning coordinated by the National Guardian’s office.

Henrietta Hughes National Guardian has gone as far as claiming that the Freedom To Speak Up project has prevented “untold harm” and saved lives. She has not evidenced this claim and has not so far responded to a request to do so. 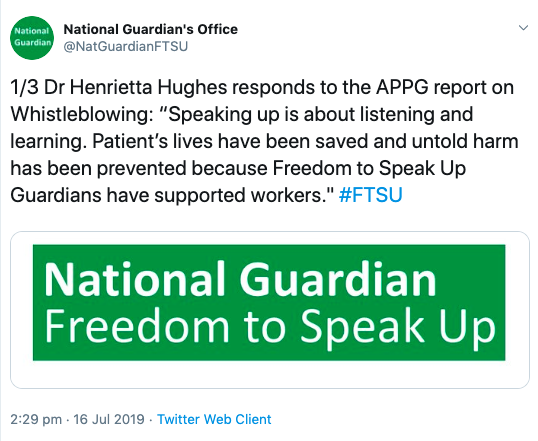 NHS whistleblowers continue to be disciplined and dismissed, and the National Guardian does her best to turn a blind eye through both unfairly designed processes and failure to even adhere to her own processes:

The Greasy Freedom To Speak Up Review is Stuck. More Tales of Silence about Silence.

Some Freedom To Speak Up guardians have reported that they have been bullied and obstructed:

Importantly, and predictably, FOI data showed that Freedom To Speak Up Guardians are not fulfilling a core function as intended – acting independently by escalating matters to the National Guardian.

The National Guardian’s office admitted that it received only 18 whistleblowing disclosures from 18 Freedom to Speak Up guardians in 2017/18, out of many hundreds of guardians in that year:

Scotland followed the English model and installed ‘Whistleblowing Champions’ in Scottish NHS Health Boards. The variation being that the posts were restricted to non executive directors and the champions were not intended to be the main interface for staff:

“The Whistleblowing Champion would not be expected to:

It had been a recommendation of Robert Francis’ Freedom To Speak Up Review that NHS bodies should designate a NED as a whistleblowing lead on boards. This was interesting because NEDs are not classed as workers under UK whistleblowing law and are not covered by the legislation.

As might be expected, the Scottish model also failed. A Scottish whistleblowing champion came forward with related disclosures:

To test whether Scottish whistleblowing champions had in fact been doing much championing, I asked about the number of disclosures that they had made to the Scottish Health Minister and NHS Scotland. The numbers were so small that they could not be released without risk of identifying individuals.

“No whistleblowing champions have approached Ms Freeman to make ‘qualifying disclosures’ as defined under the Public Interest Disclosure Act 1998 (PIDA), since Ms Freeman made her speech on 8 October 2018.”

“Prior to 8 October 2018 between 1-5 whistleblowing champions disclosed to Ms Freeman that health board staff concerns are being covered up by a health board, or that health board staff are being unlawfully victimised and subjected to detriment for making public interest disclosures. We are unable to advise you of the exact numbers as this could potentially identify any individual(s) involved in the case(s).”

The Scottish government disclosed feedback from Health Board whistleblowing champions about the role:

The comments by the whistleblowing champions give an impression of variable and  primarily administrative processes, with dependence on information filtered by executive directors. Some indicated that they cross-checked whether whistleblowers were happy with investigations (NHS Lothian). Others such as NHS Tayside emphasised that they had a hands off role:

“WBC are not expected to be the sole point of contact for staff, be directly involved in the operation of the whistleblowing policy and investigate cases.”

At NHS Grampian, a site of much suppression and multiple whistleblower carnage,  the whistleblower champion noted with doubt, that there had been no recent reports of whistleblowing. They speculated on what this meant, but concluded that they could have no part in directly investigating whistleblowing issues.

Structures which are designed to be inconclusive will not reveal the truth.

The ineffective structures that we have in place at present need to be replaced with properly designed infrastructure that genuinely serves the public interest, and is underpinned by effective new UK whistleblowing law.

Whistleblowing: the inside story – a study of the experiences of 1,000 whistleblowers

This is a study by Greenwich University on a highly selected sample of whistleblowers who contacted the PCaW helpline, but it does nevertheless shed very useful light on high levels detriment that are quickly accrued during the internal stage of whistleblowing.

Whistleblowing in Whitehall: Civil Servants’ Complaints about Breaches of the Civil Service Code since 2014

Speak Up Guardians: A Whiter Shade Of (Corporate) Pale

Fascinating tweets from twitter account of interim medical director of @blackpoolhosp who according to LinkedIn details was trust ‘Freedom To Speak Up Executive Lead’ from Oct 2016 to Jan 2019 & used to be listed by @NatGuardianFTSU as a #FTSU Guardianhttps://t.co/OPCVEd27aj pic.twitter.com/j45kglIu7W

2 thoughts on “A portrait of ineffectiveness: Internal whistleblowing champions in their own words”