In October 2016 the National Guardian told the Health Service Journal that she intended to establish a stakeholder advisory group:

“She said the cases the office would look at would be decided by a “stakeholder advisory group”, which would include people with experience of whistleblowing.”

However, the advisory group was not established until after the National Guardian and CQC had finalised the processes for selecting whistleblower cases for review, raising questions of tokenism.

The first advisory group meeting took place on 3 November. About 25 people attended. Most of the meeting time was devoted to the National Guardian’s Office’s pre-determined issues. This hugely expensive meeting, which took up the costly time of senior NHS managers, served mainly to change just a few sentences in the National Guardian’s terms of reference and ‘values and expectations’ document for the group itself.

There was limited meeting time devoted to what advisory group members considered should be the work of the National Guardian’s Office, but in that time almost all whistleblowers present indicated that they wanted to see reform of very inadequate UK whistleblowing law.

Despite advisory group agreement that:

the minutes of the meeting, sent out on 13 December 2017 , were minimal with no attendance or membership details. Neither was there any mention about the discussion that had taken place about the need for meeting minutes to be informative and so inclusive of all whistleblowers interested in the work of the group.

Ideas contributed by group members were largely reduced to ‘word clouds’. For example, this was the word cloud for ‘What matters to you?’, which made no mention of law reform: 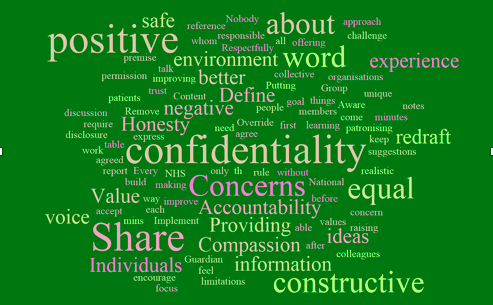 A list of members was finally provided on 29 January 2018:

The stakeholder advisory group will meet only four times a year. It is too large to allow more than superficial discussion.

Based on events so far, the advisory group is likely to be just another fig leaf for a programme which the government has no intention of changing, no matter what whistleblowers say.

A suggestion on the 3 November 2017 was that the National Guardian should set up an electronic noticeboard, where advisory group members could post ideas and carry on discussions between meetings. This idea is not mentioned in the meeting minutes and no such facility has been established. But then, why foster a community with alarming tendencies to independent thought if what is required is a rubber stamp?

A persistent power dynamic of the Freedom To Speak Up project is that whistleblowers are have been repeatedly patronised, and fobbed off, and treated more as passive subjects who are expected to fit around whatever systems and processes are presented to them.

In an attempt to shift this dynamic, we asked the National Guardian at the meeting of 3 November 2017 to consider allowing whistleblowers to lead an event. The reply was affirmative, subject to agreement of details.

The response became less affirmative after we submitted a proposal to lead an event on reform of UK whistleblowing law, the Public Interest Disclosure Act (PIDA). Our proposal was passed to a comms manager who claimed that law reform was not part of the National Guardian’s remit.

However, the National Guardian is free to pursue any issue that may be a barrier to speaking up in the NHS, as was made clear by the Care Quality Commission’s position specification:

“The National Guardian will have a highly visible role in providing support to the system. This will include the sharing of good practice, reporting on common themes in concerns raised and actions taken, identifying barriers to improvement and how these might be overcome, and reporting on progress towards the creation of a safe and open culture.”

The comms manager also declined to provide practical support with sending out invitations, on this creative basis:

“You asked for assistance in sending out invitations and distributing an ‘event pack’. We think that this might compromise the independence of the event so feel that invitations may be better coming from you.”

Appearing to contradict himself, he stipulated that the National Guardian’s Office would only help promote the event after vetting any materials:

“We would, of course, be happy to promote the event to our stakeholders, though any material we use for that will need to go through our normal communications quality assurance process.”

Finally, he required that any event led by us should reflect the Office’s aims:

“…we must be mindful that resources that are used for this event should also advance the general aims of the National Guardian’s Office.”

All this seems to ironically suggest that speaking up within the National Guardian’s advisory group process is only allowed on permitted topics. If so, this defeats the purpose of the group.

The National Guardian herself has been asked to clarify her Office’s position. Her initial response did not provide clarification, and a further request has been made:

The National Guardian refused a year ago to seek law reform based on a flawed argument (originally advanced by the government and supported by Robert Francis) that work on culture change should take priority over law reform.

“I do understand the views of campaigners who say that the current legislation requires reform. However, we are not currently seeking to campaign for changes to the law. Instead, we will be working collaboratively with a wide range of bodies to deliver a reformed NHS culture where freedom to speak up is ingrained and becomes ‘business as usual’

It would be disappointing if the National Guardian ignores her own advisory group and continues in this position, without even listening to expert evidence and debate about the need for law reform. 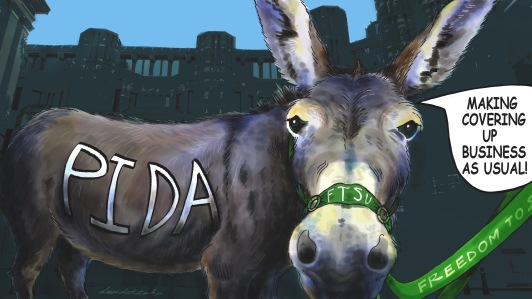 2 thoughts on “National Guardian’s Stakeholder Advisory Group: Speaking Up only when permitted?”