The smoke and mirrors on NHS whistleblowing by Jeremy Hunt et al continue, and this piece chronicles some more evidence of government manipulation.

A handful of whistleblowers were invited to the tightly controlled, high gloss, well-polished conference held by the National Guardian last month. Whilst the invitations were manifestly related to our membership of the National Guardian’s advisory group, it was unclear why we had been included.

We were not invited to lead any discussions or to present. We were given no role and allowed little voice. Time for audience questions and discussions was limited. Although there was an attempt to place whistleblowers in seats at the back and edges of the conference hall, some of us made other arrangements.

We were treated to a speaker – the King’s Fund Head of “Thought Leadership” – who referred to “angry” whistleblowers. He suggested that trust executives needed to deal more understandingly with irate whistleblowers. In doing so, he seemed not to acknowledge the fact that the vast majority of whistleblowers are very reasonable in raising concerns, and that it is only after repeated suppression and reprisals that some become angry.

I had a tussle with Henrietta Hughes on being allowed to respond to this distortion. We spent longer disagreeing on whether I could comment than it took me to rebut the Thought Leader’s misrepresentation. Several Speak Up guardians were brave enough to later privately express approval that I had spoken up, which rather said it all about the nature of the Freedom To Speak Up project.

Cult of personality was the order of the day. The National Guardian’s Office’s billed the key speakers as ‘stellar’. So much for public service values of selflessness.

This was the official conference slide pack produced by the NGO:

Uneven Stevens and a static 70% statistic

Simon Stevens triumphantly announced that an expansive promise which he made a few months previously to appoint one third of BME Speak Up Guardians at NHS England (NHSE) had been fulfilled.

Behind this theatre lay a great deal of evasion by NHSE. It had avoided answering questions for some time, prior to the conference about its achievement of the one third target, no doubt saving up for Stevens’ conference splash.

NHSE’s National Director for Transformation and Corporate Operations (NHSE’s Lead Guardian), has still not fully substantiated Stevens’ claim of one third BME despite several and increasingly specific enquiries. In short, NHSE has claimed that the crude headcount of BME Guardians is one third of the total, but has repeatedly failed to evidence that the WTE of BME Guardians genuinely comprises one third of its Speak Up Guardian service.

On 8 March NHSE shared internal documents which indicated that its Speak Up Guardians would have designated time for the role:

“With sufficient designated time to carry out their role, participate in external FTSU activities, and take part in staff training , induction and other relevant activities”

but did not provide details of the WTE of its BME Speak Guardians.

When I continued to press for disclosure of the WTE details, this was the reply from NHSE on 16 April 2018:

“I will not be able to provide data on this time commitment, as Guardians are not required to record how much time they spend within their FTSU roles. Time is not considered a reporting factor; Guardians are focused more importantly, on ensuring colleagues feel empowered to raise their concern(s) via the FTSU process without any time constraints.  Any time spent within the Guardian role is protected time and the Guardians are fully supported to take as much time necessary to ensure the FTSU process fully supports colleagues when raising their concern(s).”

One might be tempted to wonder if NHSE hurriedly designated a selection of BME staff as ‘Guardians’ just to help shine up its CEO’s Race credentials, but without giving these staff ring fenced time to for the role.

This is the correspondence with NHS England, copied to Stevens:

NHS England correspondence re appointment of BME Speak Up Guardians

Of relevance, I asked NHS England to share a previously suppressed report on the experience of its BME staff, which had been leaked and was the subject of a report by the Health Service Journal in December 2017.

NHS England agreed but omitted to attach the report to its reply. After a further request, NHSE gave me the link to a more favourable report but this was dated March 2018. On the third attempt, the report was disclosed:

This showed that 58 out of 163 (36%) of BME NHSE staff who took part in the survey reported “personally experiencing bullying, harassment or abuse at work, based on their race since joining NHS England”.

A debate on Diversity was organised as part of the NGO’s conference on these lines: 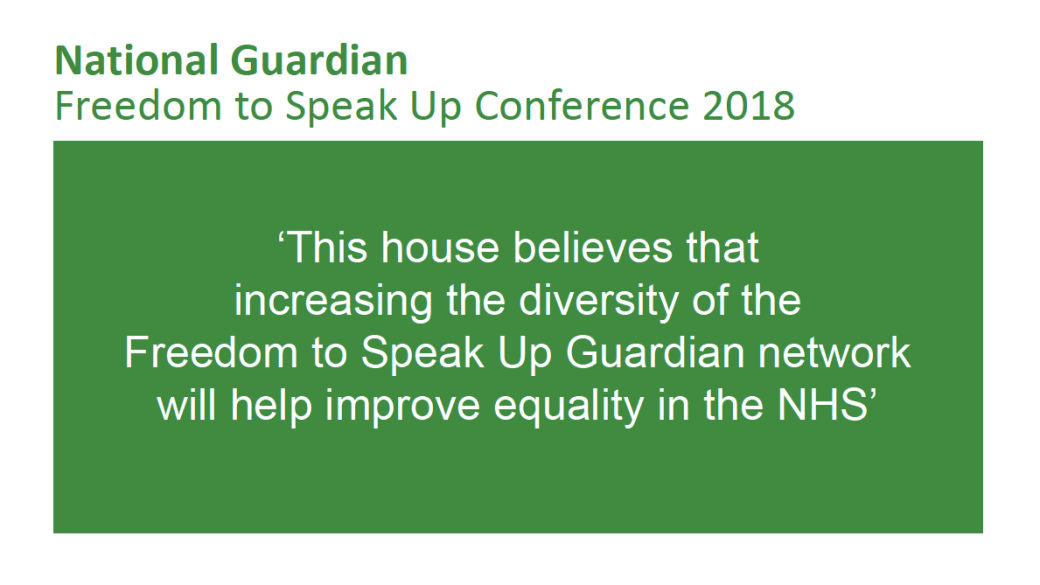 The chair of NHS England’s advisory group for the WRES programme spoke against the motion.

Astonishingly, the conference voted against the motion.

But at least Stevens came clean about the fact that the key metric on NHS whistleblowing, question 13b of the national staff survey about staff security in speaking up, had remained static at 70%. This was despite the appointment of hundreds of Speak Up Guardians and the millions spent on the NGO and the Freedom To Speak Up project. However, neither Stevens nor the rally organisers openly acknowledged this enormous elephant in the room. 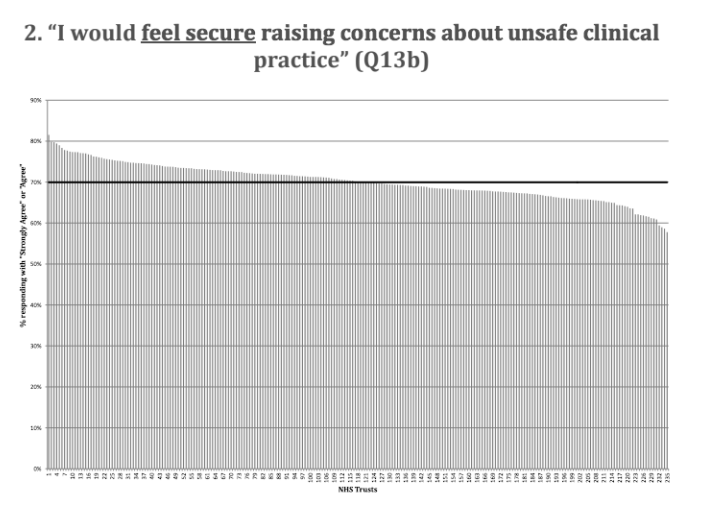 The static 70% statistic was omitted from the briefing report for the 2017 NHS Staff Survey.   The CEO of the Picker Institute, which conducts the survey, later advised:

“…the briefing report for the survey is intended to provide a summary of results rather than to fully list the results for every item.”

But one would have thought that the overall score on question 13b would have been of great interest this year, after establishment of the Freedom To Speak Up Guardian network.

The score of 70% implies that 30% of 1.3 million NHS staff (390,000 staff) do not feel secure in raising concerns. That potentially represents a great deal of unreported patient harm and risks.

Nevertheless, Steven tacitly conceded that things were awry, because he indicated a need for increased measures. He floated a suggestion that the NHS might start tracking whistleblowing metrics in the annual NHS staff survey, broadly in the same way that the WRES programme tracks Race indicators.

However, a debate would be needed first on the validity of the current survey measures, and whether any changes are needed. Monitoring without enforcement, à la WRES policy, would be of little use.

‘Sorry’ is the hardest word for the CQC

As I arrived at the conference I came upon David Behan in obviously relaxed conversation and laughing heartily with a trustee of Patients First. They continued their discussion for some time as I followed them into the building.

When David Behan later spoke, he held forth on the importance of Just Culture, which was like the governance equivalent of watching dad-dancing.

In a cringeworthy contrivance, he repeatedly characterised the Freedom To Speak Up Guardian network as ‘social movement’, even though the project has been wholly centrally driven.

Behan subsequently approached me in unusual, tense manner for a very uncomfortable encounter. His approach was most unexpected given that he has avoided interaction where possible in the last few years. He even deployed snippy letters by his Head of Legal services. The interaction was also in marked contrast to the conversation that he had earlier with the Patients First trustee. I remain mystified as to why Behan approached me.

Whilst bestowing himself thus Behan asked my companion, a sacked and blacklisted fellow whistleblower, what they were doing now. He tersely dismissed the whistleblower’s concerns about CQC failure on FPPR.

Entertainingly, Behan managed to breached my confidentiality during the encounter. Whilst there was no real harm done by the breach, it was not his data to give away. He apologised at the time, but studiously ignored a mention of the incident in later correspondence. Despite demonstrating how easily slips may occur, Behan still declined to reconsider CQC’s previous refusal to audit its practice in safeguarding whistleblower’s confidentiality.

Peter Wyman the CQC chair has since maintained this position, with the trademark charm that is now all too familiar.

This is the correspondence exchanged after the conference:

Correspondence with CQC about whistleblowers’ confidentiality March and April 2018 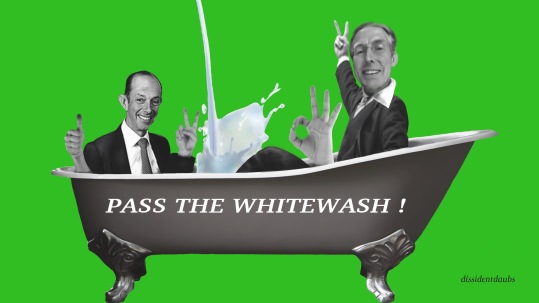 Jeremy Hunt deigned to appear at the conference. Subsequent FOIA disclosures by the National Guardian’s Office (NGO) and the Department of Health and Social Care (DHSC) revealed that there was careful stage management by the two bodies.

DHSC disclosure 9.04.2018 – correspondence between DHSC and National Guardian’s Office about the conference

CQC disclosure 9.04.2018 – correspondence between DHSC and National Guardian’s Office about the conference

The DHSC was keen to be supplied with ‘Good News’ items:

The NGO was careful to brief Hunt’s team about the presence of whistleblowers who were “less supportive” of government policy:

The NGO also briefed Hunt’s team that whistleblowers whom it had invited to the conference might have opinions:

NGO officials even solicited retweets from the DHSC, consistent with the social media strategy of central NHS bodies to prop each other up.

Potential answers to questions about the private sector were rehearsed:

Where there were anticipated questions about weaknesses, the strategy deployed was one of deflection. For example:

The NGO also briefed the DHSC that CQC will assess how well the Speak Up Guardian role is implemented in any given trust:

This is bound to work well for the Secretary of State then, as the CQC has helped to bury whistleblowers whether by act, omission or both. The CQC has through its various failures made whistleblower reprisal acceptable.  It has no transparent, fit for purpose inspection methodology on whistleblowing governance. CQC’s guidance notes on whistleblowing for inspectors are painfully basic and do not give confidence that inspectors have the necessary expertise.

Hunt brazenly claimed during his speech to the conference that 90% of staff who had raised 4600 concerns through trust Speak Up Guardians would speak up again. He then tweeted the claim for good measure:

The NGO supplied the 90% statistic: 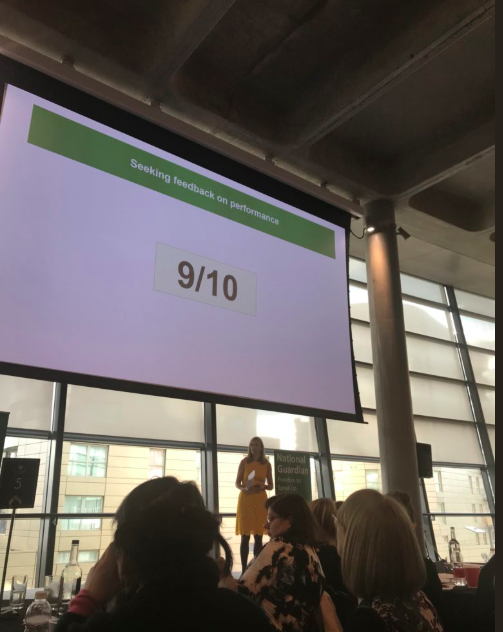 The 90% statistic was based on incomplete, flawed data – more about that another time. It was unpublished, and has been confirmed to be so by a UK Statistics Authority investigation. Hunt breached the UK Statistics Authority’s code by citing an unpublished statistic. The code seeks to restrain dissemination of dodgy digits by Ministers for political gain. Hunt has done it before.

From a letter 18 April 2018 by the UKSA’s Director General of Regulation to me about Hunt’s use of the 90% statistic: 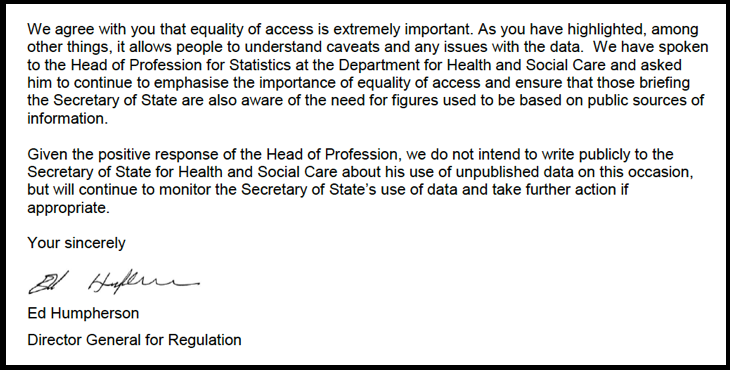 But then, what’s a fib or two when you’re ‘stellar’?

The National Guardian’s Office has still not published the 90% statistic despite the further UKSA correspondence. It has additionally cited what appears to be another unpublished statistic. I have written to question these behaviours, copied to UKSA. 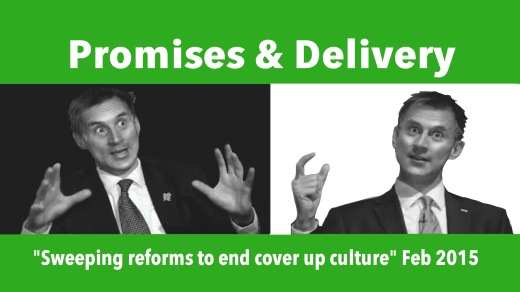 3 thoughts on “Behind the performance: A postcard from the National Guardian’s Conference of 6 March 2018”