The Care Quality Commission the health and social watchdog should carefully examine care given at night, but its own data shows that it fails to do so.

In 2012 the Royal College of Nursing surveyed its members about what they would hope for from the regulator, and submitted this evidence to the parliamentary Health Committee. A most interesting finding was that nurses wanted the CQC to inspect at night: 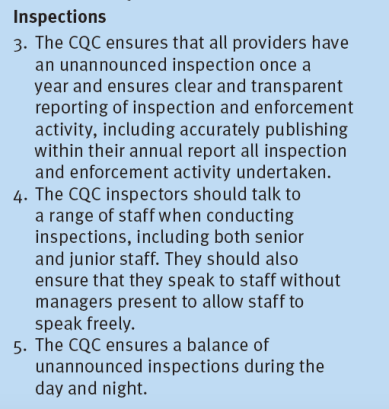 A perceptive reader might understand this to be a plea for help from a concerned workforce, that was not confident in speaking out. Any regulator worth its salt should have taken this seriously.

When there are severe pressures on services, a temptation for hard pressed managers is to make savings on staffing levels. Night shifts can be disproportionately cut by non-clinical managers who may assume reduced demand, and do not fully appreciate the clinical consequences or turn a blind eye.

In September, it was reported that two junior doctors at Plymouth were left looking after 436 patients.

Indeed, the well known and ongoing case of NHS whistleblower Dr Chris Day originated from a phone call that he made one night about an under-staffed shift.

A subsequent critical care peer review of the hospital in question flagged multiple areas of concern, including:

“The consultant to patient ratio was significantly low, presenting an area of serious concern…High number of peri-arrest calls and inadequate escalation pathway for deteriorating patients on the ward….Wards will tolerate a high NEWS scores and sometimes not report until score reaches 9”

Understaffing at night can coincide with a vulnerable time for some patients. Older, confused patients may wander more and be at risk of falls and injury, particularly if they have received sedative medication.

Line of sight care is preferable for the most vulnerable but becomes impossible when nurse : patient ratios are insufficient to support suitably safe and intensive care.

There have been repeated coroners’ reports on deaths in which there was a failure to provide planned care – including 1-1 care – for confused patients who suffered falls and sustained major injury. For example: 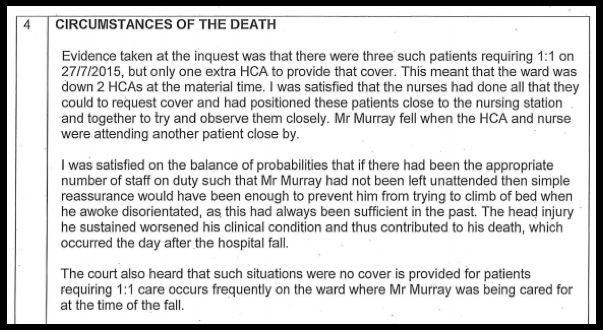 However, the government dismantled the Safe Staffing work by NICE and it stubbornly resists mandating safe staffing levels, in contrast to the Welsh government which passed legislation that will come into force in April 2018.

Under the new Welsh law, there is a requirement to calculate and deliver a safe level of staffing:

Night staff in health and care settings can also be neglected and marginalised. Weak management can lead to silos and pockets of troubled culture. Unsupported staff may also sometimes escape from day time work to night work as a way of coping with unaddressed issues. I have worked in poorly led services where there was a very uncomfortable and noticeable Race divide, with some wholly BME staffed night shifts.

In the private care home sector, there are repeated reports of institutional abuse arising from chasing profit, mitigating against local authority cuts and skimping on staffing levels. A notorious practice is to drag residents out of their beds very early in the morning, for institutional convenience and to squeeze the most value out of night staff.

Publicly, CQC disapproves of this practice:

But CQC did shockingly little when Helen Rochester a care home whistleblower reported a prime example of such practice.

CQC did not inspect for three months after Rochester’s disclosures. It only grudgingly pitched up at the care home after Rochester embarrassed the CQC board by attending its video recorded public meeting in June this year.

In April 2017 Rochester reported to CQC:

“I am also aware of institutional abuse happening on nights with the blessing of management. There is a list of 11 residents that have to be got up for the day staff and on Monday – Thursday carers start at around 04.15 to do this. I refused to do this at the weekend and when I questioned this I was told “they can sleep in their chairs”. I was also told all 11 have “other needs” that make them eligible for this treatment by the deputy. If that is the case then the home needs to be staffed accordingly so they can be got up unrushed at a sensible time.

On one night I saw this man being got up at 05.20 against his wishes to accommodate the day staff. His name is on the list of 11”

Despite being given this information, when CQC eventually sauntered along to the care home three months later, it did so at 06.00 am:

“The inspection took place on the 13 July 2017. This visit was unannounced and started at 06.00 in the morning in order to review what care was being provided by night staff to people early in the morning. It was completed by two inspectors”

And despite the serious Safeguarding concern raised by Rochester, the dilatory CQC only spoke to three residents:

“When the inspectors arrived six people were in the lounge. Although they were alone in a lounge area, the homes’ chef was nearby and provided early morning drinks. People were comfortable and chatting with each other. One told us they were very happy to be up and about early. “I am an early bird.””

To add insult to injury, and despite Rochester (an experienced former nurse and a previously vindicated whistleblower in another serious care home scandal) reporting a catalogue of other serious care failures, CQC rated the care home ‘Good’, safe and well-led.

Rochester complained about CQC’s conduct, but the CQC investigated and exonerated itself as usual. CQC informed Rochester that both the CQC Chair and Chief Executive had sight CQC’s dismissive complaint response before it was sent to her.

Undeterred, Rochester filed a Freedom of Information request about CQC’s out of hour inspection activity:

CQC disclosed that it has no definition of what constitutes an ‘out of hour inspection’.

CQC also failed to answer whether it has guidance for its staff on when an out of hours inspection should be conducted.

In its usual self-justifying style, CQC maintained that it did not respond to the RCN’s 2012 recommendations for more night time inspections because the Health Committee did not ask it to do so:

“There were no specific questions put to CQC by the Committee and therefore no response to those comments was required.”

This is perhaps understandable – so much nicer to arrive announced, when the reception committee has been fully prepared and the hospitality budget has been apportioned:

Extrapolating from CQC’s figures, these are the specific rates of out hour inspections for different sectors:

CQC’s reluctance to grapple with the issues facing care and health staff at night is clear.

Whistleblowers like Rochester who knock on CQC’s door in good faith unwittingly disturb a hostile force, that sometimes unscrupulously wreaks serious damage on those who trespass on no-go areas.

In Rochester’s case, CQC breached her confidentiality as a whistleblower in an earlier case. It then advised her most recent employer to refer her to the Disclosure and Barring Service on spurious grounds, that were later dismissed by the DBS.

All whilst the CQC Chief Inspector for Adult Social Care is frequently seen in the limelight and writes articles extolling compassionate care and progressive workforce practices. 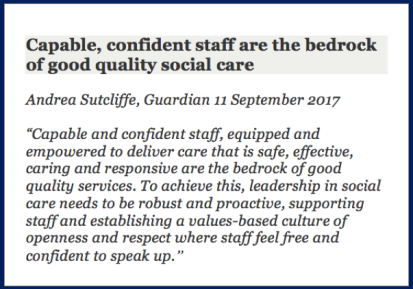 A very important coroner’s Section 28 warning report was issued to CQC in 2013. This considered that there should be clear standards on safe night time staffing levels in care homes and hospitals:

In September, I asked David Behan CQC Chief Executive to publish this missing response amongst others. After a reminder, CQC replied thus:

“CQC will keep the suggestions you make under consideration. We do not intend to engage in further correspondence with you on this matter.”

However, CQC’s response of April 2014 has now been quietly published on the Chief Coroner’s website:

In its response, CQC dodged the issue of safe staffing standards.

CQC, Coroner’s warnings and the neglect of older people in hospital

2 thoughts on “CQC’s Asleep on the Night Shift”