The National Guardian for NHS whistleblowing is Robert Francis’ much-derided brainchild. It has no powers and is not evidence-based. It is a replacement for his earlier recommendations that there should be hard legislative reform to properly outlaw whistleblowing reprisal. [1] Twenty months after Francis proposed that a National Guardian should be established, the office is not yet open for business and we don’t even know what it will do.

She was described in parliament as a ‘practising GP’ by Ben Gummer, in response to the excellent Philippa Whitford noting concerns that Hughes was an NHS England senior manager. 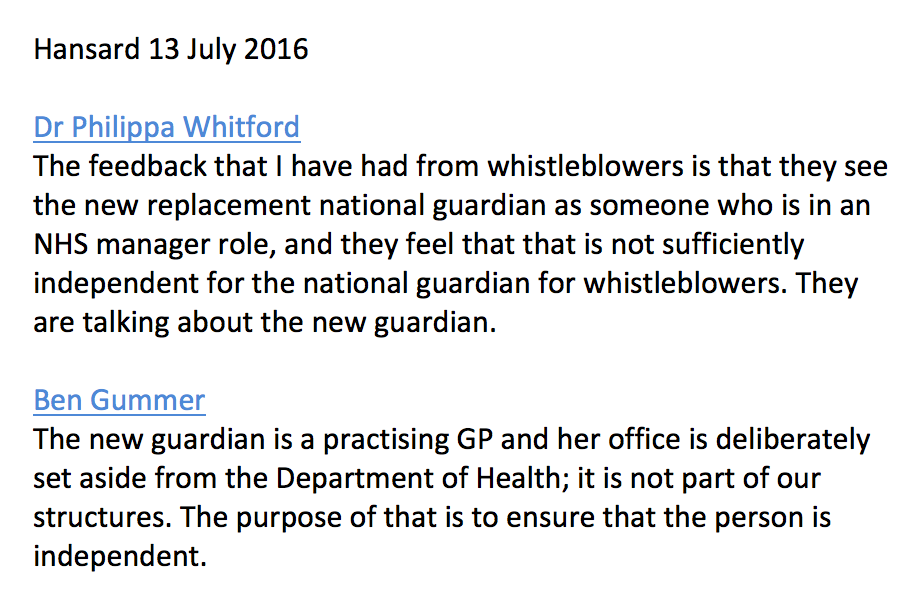 Hilariously, when NHS England was asked to disclose how many days a week Dr Hughes worked for it as a Medical Director, it apparently sought to protect Mr Gummer by refusing-to-disclose-this-information-on-grounds-of-privacy:

It has been unclear what credentials either the current National Guardian or her predecessor hold in the field of whistleblowing. Skills, knowledge and experience in whistleblowing were not even on CQC’s list of requisites for candidates.[2]

We now have Henrietta Hughes, a former NHS England senior manager, reporting directly to David Behan, CQC Chief Executive and a former Director General of the Department of Health. What could possibly go wrong with such an arrangement for scrutinising frontline whistleblowing, about things for which NHS England, NHS regulators and the Department of Health are ultimately responsible?

Disappointingly, 20 months after Mr Hunt drenched parliament with his tearful lament about the findings of Francis’ Freedom to Speak Up Review on the treatment of NHS whistleblowers, there is still no clarity about what the National Guardian will do. The office has still not announced that it is open for business as regards whistleblowers who have been unable to make progress with their employers. There isn’t even any certainty that the National Guardian will accept complaints from whistleblowers.

The CQC went through the motions of a faux consultation exercise last year about the National Guardian’s office, after it had already finalised the job description and advertised the post. Of course, the CQC ignored the concerns of whistleblowers who contributed to the ‘consultation’.  Things then fell apart after the CQC had the gall to appoint a current NHS trust director to the post – despite the glaring conflicts of interest – who was only seconded to the CQC for two days a week. This arrangement quickly crashed and burned. [3] Mr Hunt declined to comment. There were calls for the next appointee to come from outside the NHS.

The job was re-advertised with some significant omissions from CQC’s position specification. I asked Robert Francis, as the designated NED for the project, about an apparent retreat by CQC [4] from ludicrous restrictions that it had attempted to place on the remit of the previous National Guardian, but I never heard from him. When I later put the same questions to Henrietta Hughes upon her appointment, she replied – guess what – there will be yet more gassing about it all:

“Over the coming months the precise scope and design will be defined. I will be seeking views from a wide range of individuals and organisations both from within the NHS and externally to ensure that best practice can be shared.”

This looks like more classic NHS buck-passing and procrastination. Frankly, anyone who accepts the job of the National Guardian is either unlikely to understand just how emasculated the office is – or worse, unlikely to care.

But let’s face it, would the Minister really want anybody from outside the club, with clear credentials, who would do a half-decent job of NHS whistleblowing reform? I’d be delighted if Dr Hughes proves me wrong, but….

No, it’s still Stalin, not Gandhi, whatever Mr Hunt says.

Another helping of gulag with lashings of whistleblower show trials, Minister?

Subject: Role and powers of the National Guardian for Freedom to Speak up

To Dr Henrietta Hughes, CQC National Guardian for Freedom to Speak Up, 5 October 2016

Thanks for your email.

I wasn’t clear exactly when you were to start your post as National Guardian, besides that it would be this month. On the assumption that you may now be in post, may I ask if there is a clear timetable yet for resolving the lack of clarity about what the National Guardian’s remit will comprise? (Please see my letter to you below, of 7 July 2016).