NHS managers “look up, not out”, so said a major report that was suppressed by the Department of Health. [1] On that theme, the Care Quality Commission has a political function: to flatter politicians and help manage potential embarrassment. It has made arbitrary and inconsistent decisions, which has brought it into conflict with providers, complainants and whistleblowers. CQC has said all the right things about the importance of good complaints handling and transparency, but a review of CQC’s annual reports shows that the CQC has provided little information about why people complain about CQC and what CQC has learnt from the complaints.The data that CQC has released about complaints is not presented in a consistent format and mostly lacks detail. There is limited evidence to demonstrate that CQC has made changes in response to complaints and that it does not repeat mistakes.

The health watchdog the Care Quality Commission was created to replace its more effective predecessors, who had embarrassed the government. Notably, CQC’s immediate predecessor the Healthcare Commission (HCC) had uncovered the grave care failings Mid Staffs, and strategic failures which had contributed to the scandal. The excellent HCC investigation report by Dr Heather Wood et al can be found here: hcc-investigation_into_mid_staffordshire_nhs_foundation_trust

CQC disbanded the central investigation team it inherited from the HCC, which had been so effective. [2] Notoriously, CQC also gagged Dr Heather Wood  [3] – this became the subject of much criticism in the public inquiry into Mid Staffs. One interpretation of these events is that the CQC did not wish to be fully “sighted” on politically embarrassing provider failures.

There have also been controversies where providers have felt unfairly treated by the CQC, in terms of oppressive inspection approach, increases in CQC’s fees, unfair ratings and excessive factual inaccuracies in CQC reports. [5] [6] Most recently, there was an outcry and many questions when Dr David Zigmond’s practice was shut down. [7] This happened after Dr Zigmond published a book the previous year entitled “If you want good personal healthcare – see a vet”. He wondered whether this “had been a black mark against him”. In 2014, before the publication of Dr Zigmond’s critique of the direction of health services, the CQC had rated his practice fully compliant and noted very positive feedback from patients: “People we spoke with were very happy with the treatment they received at the surgery”.

So how does CQC perform when people complain about it? CQC previously stated that it intended to model best practice on complaints handling:

“We intend to become a role model in the way we ourselves handle and resolve complaints about CQC and concerns raised by our own people.” [8]

However, a look at the six annual reports published so far by the CQC since its inception raises questions about whether CQC is a good role model. Data in these reports is presented with CQC’s trademark inconsistency, which obscures as much as it reveals. [9] [10] According to the six annual reports, 2644 complaints have been made about CQC between 1 April 2009 to 31 March 2016, and 434 (16%) of these complaints proceeded to Stage 2 of CQC’s procedure. Half of CQC’s annual reports were totally silent on the numbers of complaints upheld at Stage 1 and Stage 2. See table 1 below.

Almost no evidence was provided about the experience of complainants or how satisfied they were with CQC’s complaint handling. This seems a significant omission as CQC has placed an emphasis on the experience of people who complain about regulated bodies:

“ From now on, we will ask providers to share with us any survey they have carried out of people who have complained to them in the last 12 months.”[11]

Has CQC failed to practice what it preaches by not carrying surveys of its own? Or has it surveyed its own complainants, but failed to transparently share the results?

In some years CQC gave a rough indication of the nature of complaints, but in two of the years, no information was provided at all. The most detailed report about complaints was provided by the CQC annual report of 2012/2013, but this was an exception. See Table 2 below. 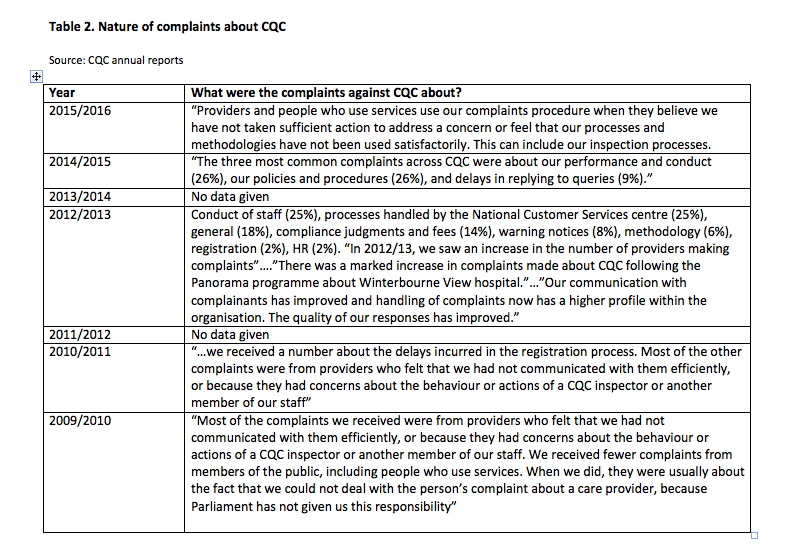 No systematic reports have been provided by CQC on how it has learnt from complaints, made changes or stopped making the same mistakes. Perhaps the most interesting data, analysis of the nature of complaints that were upheld and CQC’s responses to these upheld complaints, is not provided apart from a few selected anecdotes.

CQC’s thematic review report “Complaints Matter” [9] noted that in October 2014, CQC introduced a mandatory ‘key line of enquiry’ in its inspections on how well providers are handling complaints.

So where is the equivalent evidence on CQC’s own complaints handling? Is it too awkward to publish because it might show that the CQC – and its masters – have little intention of changing how CQC does business?

CQC said in 2014 that it would rate providers’ complaints governance as follows:

So, where would you place the CQC on this scale?

PHSO has the CQC’s back

Between April 2009 and September 2015, the PHSO received 354 complaints about CQC, not one of which had yet been upheld as of September 2015. See here for more:

[1] Achieving the vision of excellence in quality, Recommendations for the English NHS system of quality improvement, Institute of Health Improvement, January 2008

4 thoughts on “Do “Complaints Matter” to CQC?”