WhistleblowersUK is a private company which is seeking to exert major influence on how the UK deals with whistleblowers, but it has not been accountable.

On its website, its CEO Georgina Halford-Hall claims that she set up the company:

Companies House records state that WhistleblowersUK was set up in December 2014 by Ian Foxley, with Halford-Hall later appointed as a director on 8 April 2015:

WhistleblowersUK is paid by US Bounty hunting lawyers Constantine Cannon to act as secretariat for the controversial Whistleblowing All Party Parliamentary Group (APPG):

Many troubling questions continue to swirl around Whistleblowers UK and the APPG.

Norman Lamb MP resigned from the APPG in October 2019 because of unanswered questions that he put on my behalf.

Tom Lloyd WhistleblowersUK Chair declined to answer questions which I put to him personally last year, and I did not pursue them further with him.

But as some serious new matters have arisen, I have written to him again. My letter is provided below.

Tom Lloyd
Chair of WhistleblowersUK
20 February 2020
Dear Tom,
WhistleblowersUK’s financial arrangements, re-investment of surplus income, not for profit status, and declaration of interests
In August 2019 I asked you for information on clients to whom WhistleblowersUK had sold consultancy services, as advertised on your CEO’s LinkedIn page, at that point:

I also asked you:
“I now see that there have been two payments of £7,500 respectively in February and June 2019, described as donations, from Constantine Cannon.

Please could you advise if these are the payments referred to in the whistleblowing APPG’s registered details, with respect to the statement: “WhistleblowersUK is paid by Constantine Cannon LLP to act as the group’s secretariat From : 10/07/2018 To : 09/07/2019”or whether the two payments in February and June were separate, additional payments unrelated to Whistleblowers UK’s role as APPG secretariat.”

I did not receive specific answers to these questions.

Indeed, in your response to my enquiry you commented:

“You have made several requests for information that we are under no obligation to provide.”

However, Norman Lamb resigned from the Whistleblowing APPG on 24 October 2019 because he could not get answers from WhistleblowersUK to various questions that I had raised about finances and potential conflicts of interest, including my request for a list of organisations to which Whistleblowers has sold Non Executive Director services, as advertised by your CEO.

He commented in his resignation letter, addressed to your CEO:

“I do believe fundamentally in transparency and being accountable to members of the public who ask questions.”

I had not intended to write to you again. However, now that a document has emerged showing that WhistleblowersUK asks whistleblowers to pay £100/ hr for assistance, and 5% of any future award or settlement (the “WhistleblowersUK “Statement of Cooperation and Agreement”), I feel it is all the more important to re-visit financial transparency.

This is particularly as in 2015, you prepared a speech in which you described WhistleblowersUK’s role as one of holding whistleblowers’ hands, and signposting them onwards to appropriate sources of support.

“We receive calls and emails and refer people to appropriate support and legal advice, in short we “hold hands” with whistleblowers as their story unfolds. Perhaps most importantly we believe them.”

£100/hr seems a lot to ask for signposting, particularly from vulnerable, distressed whistleblowers who are facing a lifetime of economic insecurity from crippling legal costs, loss of livelihood and blacklisting.

£100/hr also seems a great deal given that WhistleblowersUK has made repeated public statements that it can only help some whistleblowers, because it lacks funds and depends solely on volunteer staff.

On WhistleblowersUK’s website, you state that surplus income is re-invested to help whistleblowers in various ways:

“WhistleblowersUK is a not for profit organisation that reinvests its surplus income to provide help, support and information to whistleblowers.”

The accounts submitted by WhistleblowersUK to Companies House provide only limited detail:

Accordingly, is it possible for WhistleblowersUK to provide a full account, by financial year since 1 April 2015, of:

4) Total surplus income and how it has been used to help whistleblowers?

On social media, WhistleblowersUK stated on 14 January 2019 that it had helped “hundreds” of people:

In contrast, on your website, your CEO states that WhistleblowersUK has helped “dozens” of people:

On 24 February 2019 WhistleblowersUK appeared to again contradict its social media statement of 14 January 2019 with another statement, that it received hundreds of requests but had only been able to help in a “small number of cases: 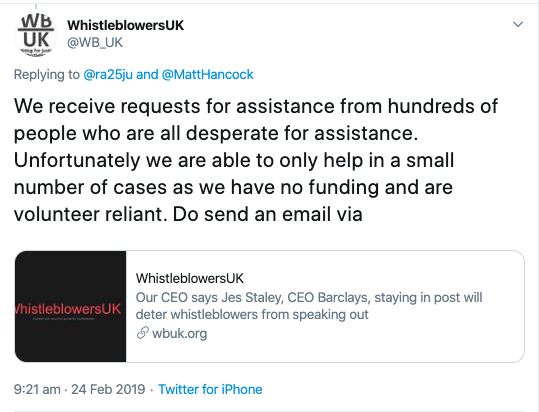 I appreciate that WhistleblowersUK elected not to answer my previous questions about potential conflicts of interests such the identity of clients to whom it had sold any consultancy services, any remunerated services to the FCA and the identity of any clients to whom it had sold NED services, and as far as I can see your CEO has taken down her LinkedIn page

However, if WhistleblowersUK has changed its position on transparency about these matters, I would be glad of some answers.

If Whistleblowers no longer seeks to provide consultancy services or to place NEDs in organisations for remuneration, I would be grateful for that clarification.

As a former Chief Constable and senior public servant, I am sure you can appreciate the importance of accountability and transparency, and issues of trust when caring for vulnerable people in crises.

Lastly, please note if you have not already done so that the Whistleblowing APPG twitter account recently retweeted an extremely controversial figure who has been questioned by the police in regards to complaints about incitement of Race hatred. I hope that as Chair of the APPG secretariat, you will never tolerate this, and everything else that it implies.

WhistleblowersUK Company Number 09347927 is the secretariat for the controversial Whistleblowing All Party Parliamentary Group, which launched a Bill for an Office For the Whistleblower in January. It has the appearance of a marker to benefit whistleblowing industry middlemen, without specifying elements that are essential to the public interest.

One thought on “Letter to Tom Lloyd WhistleblowersUK Chair: WhistleblowersUK’s financial arrangements, re-investment of surplus income, not for profit status, and declaration of interests”