Carl Beech is the individual at the heart of the bizarre VIP paedophile saga, whose false allegations have left some agencies red-faced and the public purse lighter by several million.

Beech was convicted of child sex offences earlier this year, in relation to possession of indecent images. It was reported that he initially tried to blame his son:

“he was prosecuted and initially pleaded not guilty, and in a police interview, sought to blame his teenage son.”

In July he was additionally convicted of perverting the course of justice and fraud, with regards to his false allegations about violent child sex abuse by various VIPs.

Beech was jailed for eighteen years.

These were the judge’s sentencing remarks:

Beech was first interviewed by the police as a witness in December 2012 regarding the false allegations of sex abuse.

Possibly lending credence to his disclosures was the fact that he held a responsible job as a CQC inspector.

The CQC had been very quiet about this part of the story.

The regulator declined to answer any questions earlier this year, claiming that to do so might prejudice the second criminal trial against Beech.

But after his conviction in July, CQC had to answer re-submitted questions.

The CQC’ s FOI response refers to Beech’s “suspension”. It is not clear if he is still a CQC employee.

The CQC has disclosed that Beech was active and taking part in CQC inspections over a four year period, between 7 March 2012 and 11 October 2016.

This is the full list disclosed by the CQC:

Beech inspected NHS trusts in the South West on fourteen occasions as follows:

Beech’s public facing role meant he was a potential risk to the public, particularly to vulnerable groups. CQC indicated:

“…we have reviewed all records to identify any risks from the inspections and CQC activities that he was involved in and we have no information of concern about his conduct on any inspection. All of the providers have been notified of his involvement in the inspection of their services.”

The CQC maintained that it follows best practice when recruiting, and that after appointment, it continues to conduct three yearly enhanced disclosure and barring checks on workers who are in eligible roles.

It indicated that it has no intention of reviewing its process.

It is possible for some highly deviant offenders to successfully con others and few safeguards are insurmountable when someone lies determinedly.

Excessive bureaucracy in response to scandals, such as the glorified paper chase imposed on busy doctors after the Shipman killings, mostly has the effect of wasting resource but without real effectiveness in identifying the seriously psychopathic.

It is also easy to criticise with hindsight.

It is possible that CQC could not have reasonably identified that Beech was a fraudster and a risk to others.

But Beech did work for CQC for at least four years.

And we know from the Whorlton Hall scandal that despite the government hype about replacement of CQC’s chief officers and purported reform after failures, CQC continued to suppress its whistleblowers. Compounding its misdeeds, CQC recently tried to hide this fact.

CQC only gave reassurance in its FOI response that there were no concerns in relation to Beech’s conduct on inspections, based on its paper review.

This circumvents the question of whether other concerns were raised about him.

I have asked the regulator to clarify if any concerns were raised about Beech by its staff or other parties.

As we know from the Whorlton Hall scandal and other matters, relying upon CQC’s assessment of its own performance is far from safe.

We also know that CQC is very ready to gloss over its misdeeds, as illustrated by its recent indication to Private Eye that it has no intention to investigate why it rated Newbus Grange, a sister unit to Whorlton Hall as ‘Outstanding’ in February this year, just before physical abuse at the facility became public knowledge in April.

We also know from CQC’s 2018 staff survey that only 42% of CQC staff replied affirmatively regarding the item:

The CQC has given the following additional information on Carl Beech’s employment status:

“Carl Beech was suspended on 9 November 2016 following media reports and subsequent confirmation by the individual (on 8 November) that he was being investigated by Northumbria Police for fraud and perverting the course of justice.

A disciplinary investigation was then commenced on 8 February 2017 in relation to failure notify CQC of arrest by Gloucestershire police in relation to indecent images of children on 2 December 2016.

The disciplinary investigation concluded on 27 June 2017. The outcome was dismissal for gross misconduct with immediate effect.”

CQC has today denied that there is any evidence in its records that it received any concerns about Carl Beech:

We write in response to your correspondence of the 21 August in which you made the following request for information:

“May I clarify whether any concerns were raised about him at all, by colleagues or other parties, whether or not this related to his conduct on inspections?”

We have conducted a search and can confirm that no information is held indicating any concerns were raised about Carl Beech by colleagues or any other parties. 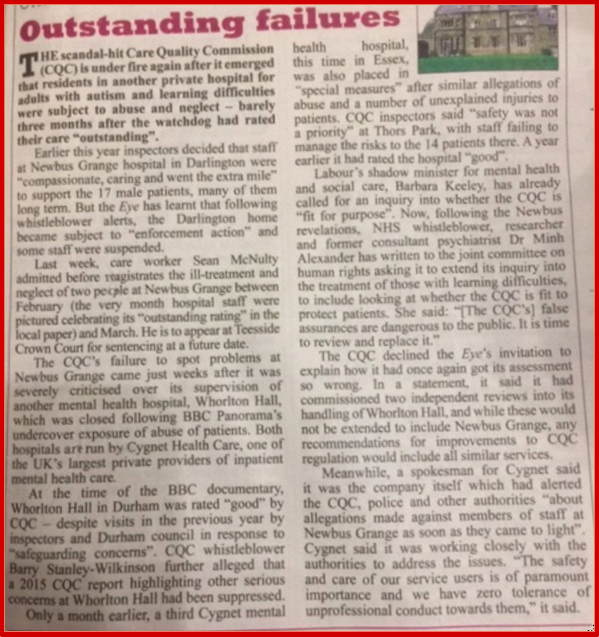 Counting the cost of the CQC: Abuse, Whorlton Hall and CQC spin doctors