Summary: In recent correspondence the Department of Health and Social Care official responsible for whistleblowing policy seemed to believe that CQC should ‘urgently’ investigate whistleblowers’ patient safety concerns. He agreed to take the issue up with his Department but then stopped responding to enquiries. In the aftermath of yet more grave abuse revelations at Whorlton Hall, where CQC only conducted a superficial thematic review in response to whistleblower concerns, the question about specific investigation has now been redirected to the Minister for Care and Gosport MP, Caroline Dinenage. Relevant correspondence is provided below.

I write regarding this simple and core issue of whistleblowing governance which remains unresolved, despite it being repeatedly raised with the government on repeated occasions, in various ways.

Latterly, I have been in correspondence with Chris Bostock, who is DHSC lead for whistleblowing policy, who kindly agreed that CQC should investigate individual whistleblowers’ concerns. He agreed to clarify DHSC’s position on this, but did not get back to me. I chased twice, and I think Chris probably received my enquiries as they generated automatic receipts, but I heard no more. Please see the correspondence below. I suspect this means that the Department does not share his view.  If so, I would be grateful if you could reconsider in the light of the grave revelations about Whorlton Hall, coming on top of the horrendous events at Gosport War Memorial Hospital.

In fact, the CQC indicated to me in Autumn 2018 that it would be reviewing its longstanding position of refusing to investigate individual whistleblowers’ concerns. The senior official who informed me of this, who leads on whistleblowing at CQC, acknowledged that CQC may have wrongly conflated whistleblowing matters with its complaints policy, when it formulated its approach of not investigating individual whistleblower’s concerns. However, I have heard nothing further, and a promised process of co-production of new procedures with whistleblowers does not appear to have materialised.

It is more than likely that defenceless people continue to suffer serious abuse under the CQC’s nose because of the CQC’s failure to function as an effective regulator, and its failure to listen properly to whistleblowers. I copy below the extract from CQC’s inspection report of 2018 on how it responded to a whistleblowing report of poor culture at Whorlton Hall. You will see that CQC undertook a superficial check and there is nothing about a specific response to the whistleblower(s)’s concerns. This is very typical of how CQC operates:

We had received information prior to our inspection about low staff morale and a culture of bullying within the service. The staff we spoke to said that morale was positive in the team and they were happy in their roles. All of the staff we spoke to felt supported, respected and valued by management and peers and felt that they worked well as a team. Staff told us that there was a culture of openness within the service and the wider Danshell group and managers empowered and actively encouraged staff to raise any issues or concerns and make suggestions to improve service delivery. Danshell had a whistleblowing policy which staff were aware of and knew how to access it. At the time of our inspection visit, there had been no discrimination, bullying or harassment cases reported by staff at the service within the previous 12 months. Danshell reported that during our visit the sickness absence rate at Whorlton Hall for the previous 12 months was 3%, which was below the NHS national average figure of 4.29% and showed staff regularly attended work. We attended a ‘flash meeting’ which was a short team meeting, which took place each day. Staff shared important patient information, including medical appointments and each team member gave an update. For example, the maintenance staff provided an update on the status of repair requests Staff were informed of any visitors that were due at the service on the day and were reminded that all visitors needed to sign in and out and wear visitor badges at all times. Meetings ended with a fun ‘question of the day’ which staff appeared to enjoy participating in.”

Indeed, the most recent CQC board papers of 15 May 2019 shows that CQC continues to dispose of an increasing proportion of whistleblowers’ concerns by taking no further action or merely noting the information for a future, routine inspection – the grey sections of the bar chart: 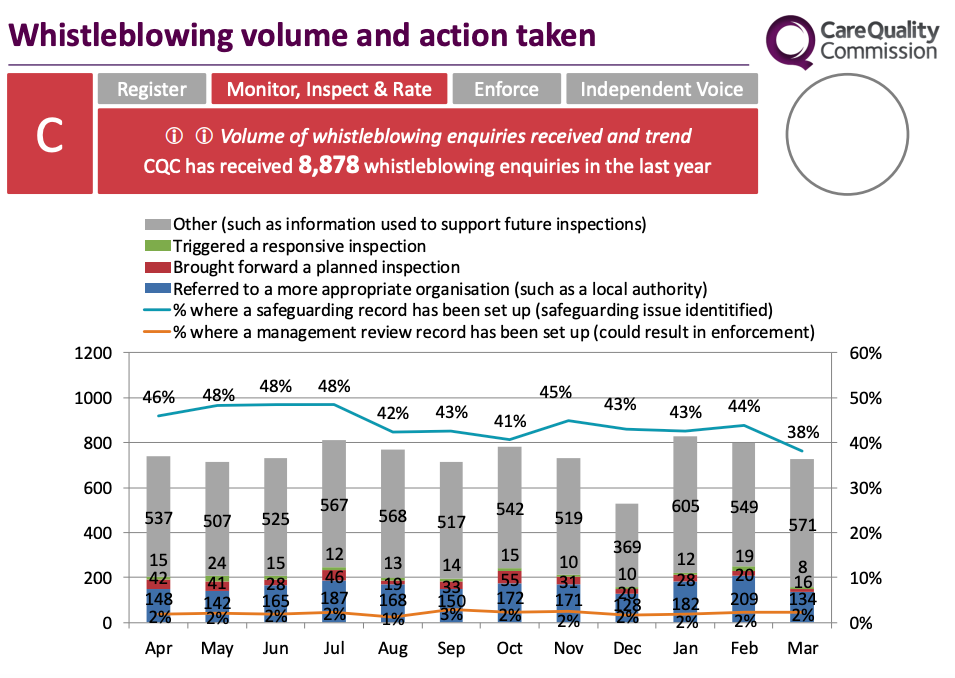 The way in which CQC operates is ultimately the government’s responsibility.

I think we need a completely clean slate, but if we are to keep the current regulatory model, I ask the government to at least ensure that CQC investigates individual whistleblowers’ concerns.

Indeed, this needs to be mandated across all sectors and should be set in the context of substantive reform of UK whistleblowing law.

Lastly, I would be grateful if the DHSC could disclose how many meetings DHSC officials have now held with BEIS about possible changes to UK whistleblowing legislation following the publication of the Gosport Independent Panel investigation report, and share any related, circulated meeting documents and records kept of those meetings.

Joint Committee on Human Rights including Lord Trimble and Lord

I was not sure if you had received my last email (27 March, below).

Could you let me know what is the current DHSC position on whether CQC should investigate the concerns of individual whistleblowers from either Health or Social Care?

Many thanks and best wishes,

From the lack of news, should I assume that this has proved to be a sticking point for the Department?

Thank you for the reminder – I will chase up with colleagues.

Is there any news from the Department yet/ a timescale for when there will be news?

Perhaps we can talk when you get the response back from DHSC about legislation.

I have raised this within DHSC and hope to be able to get back with a definitive response when I return to work in the New Year. In particular, I have asked to be pointed towards the relevant legislation – primary or secondary. This ought to enable us to consider this issue without the need for interpretation. But, for the moment looking at this from a more general ‘feedback’ perspective, my personal view would be that any feedback, whether raised through a concern, complaint or ‘speaking up’, that raises a patient safety issue ought to be urgently investigated. And, specifically within this context, the fact it may be instigated through ‘whistleblowing’ is irrelevant in that patient safety is the over-riding concern. I would be content for an alternative viewpoint to be put forward, but any subsequent ‘care system’ action would then need to be based upon that.

If you think it helpful, I would be happy to talk this through on my return.

With best wishes for the New Year.

Is there any update on this issue?

As you may already be aware, I asked Robert Francis if he might help push on this issue given that he acknowledged that system regulators have the power to investigate individual whistleblowers’ concerns, but he has been very reluctant to even answer.

His officials said a response was being prepared, but they appear to have switched to radio silence too. The Christmas holidays could be a factor.

It would be very good news if that is definitely the DHSC’s view eg. that it expects the CQC to investigate individuals whistleblower’s concerns where appropriate.

But para 2.16 of the government’s response to Gosport is open to other interpretation. It does not specifically say that the action taken by CQC includes investigation of the whistleblower’s concerns. It only says “act upon” which can be interpreted to mean other things.

I think that the CQC might take advantage of that, given that it has striven so hard all these years to deny to that it has any remit to investigate individual whistleblowers’ concerns.

This doesn’t say that inspectors should investigate individual whistleblowers’ concerns where appropriate. It just sets out more of the same – either ineffective questions to the whistleblower’s employer, bringing forward an inspection or passing the concern to another body. That’s all the CQC have ever done and it is how they avoid real engagement with countless whistleblowers.

These are the offending passages from CQC’s revised guidance to inspectors:

“4. How we act on information provided to us How we act depends on what we are told, and how serious the matter is. In the first 4 place, we need to decide whether:

CQC welcomes information from people speaking up and from whistleblowers, but we do not have powers to protect them. This is because although people can make ‘protected disclosures’ to us as a prescribed body under the Public Interest Disclosure Act 1988 (PIDA), PIDA does not give CQC any powers or any special status in relation to individual whistleblowers. PIDA relates exclusively to worker/employer relations.

Currently, people making a protected disclosure about a concern in a service they work in are protected under employment law. If a person who had raised a concern was involved in an employment tribunal in the future, the fact that they had told CQC about their concern might help any claim for unfair dismissal. However, CQC cannot intervene or be involved in any advice or any dispute with employers as a result of the concern or any other issue

If the DHSC thinks that CQC should investigate individual whistleblowers’ concerns where appropriate, but CQC is still denies that it has this power/ responsibility, how can the CQC be persuaded and compelled otherwise?

All best and early season’s greetings 🙂

My apologies but I have not been working for over a week.

However, I think the Gosport response confirms CQC has that power:

“2.16 All whistleblowing concerns raised with the CQC are forwarded to the local inspector for consideration. This allows the CQC to spot problems or concerns in local services that it may need to act upon.”

Does this answer your question? If not, please get back to me.

Is it possible to have a response to the question of 20 Nov below?

I realised there was one important that we didn’t cover when we spoke.

“It would be very helpful if the DHSC could either clearly confirm that CQC has the power to investigate individual whistleblowers’ concerns, or alter CQC’s regulations to make this unequivocally so.”

Is there some clarification possible on this point?

Danshell, the providers responsible for Whorlton Hall, who were recently acquired by Cygnet, previously boasted of 100% ‘Good’ ratings by the CQC: