UK whistleblowers are not protected. Instead, powerful wrongdoers are protected.

That is the bald truth, and the situation is enabled by very weak UK whistleblowing law.

We even have an NHS National Guardian for whistleblowing who recently and astonishingly dismissed a suggestion that there are ‘bad guys” responsible for suppressing staff who speak out.

This echoed previous remarks by the National Guardian, in which she re-framed accountability as ‘blame” and suggested that it was undesirable:

There is now a further twist in the saga of the Care Quality Commission’s mishandling of Regulation 5 Fit and Proper Persons (FPPR), which is supposed to prevent the recycling of poor managers but does not.

The Parliamentary and Health Service Ombudsman has partially upheld a complaint about CQC’s perverse closure of the FPPR referral on Paula Vasco-Knight, disgraced former NHS chief executive and convicted fraudster. This is PHSO’s report and its accompanying press release:

Blowing the whistle. An investigation into the Care Quality Commission’s Regulation of the Fit and Proper Person Requirement

Also criticised were CQC’s conveniently fuzzy record keeping, and the way its senior officers contradicted and tripped over each other with inconsistent claims and excuses, in a Keystone Cops attempt to justify what CQC had done.

CQC’s misrepresentation of information supplied by the NMC was also highlighted.

However, PHSO maintained that that the outcome of the FPPR referral would not have been clear even if CQC had followed a fair process:

This is despite the Employment Tribunal’s findings of whistleblower reprisal, breach of the NHS managers’ code of conduct and suppression to which Vasco-Knight was most likely party.

This position by the PHSO is another trivialisation of the grave betrayal of the public interest whenever whistleblowers are harmed and their concerns are covered up. It is simply not excusable because it is wilful behaviour that costs lives, both directly and through general intimidation of the workforce.

This was an attempt by CQC to minimise its culpability. CQC knew full well about Vasco-Knight’s promotion to CEO, from at least April 2016, when I sent this letter to David Behan and Robert Francis, and commented on the promotion:

“Six months is a long time for there to be no transparency or accountability regarding CQC’s FPPR process, especially as Ms Vasco-Knight has now been promoted to Acting Chief Executive at St. George’s.”

It is more likely that CQC knew well before this. The factual inaccuracy was pointed out to PHSO prior to the publication of its report but curiously, it has not been corrected.

But then, PHSO has supported the National Guardian’s public relations campaign and allowed her to make and disseminate unsubstianted claims about her Office’s illusory achievements via a broadcast by PHSO.

Moreover, PHSO had no quarrel with CQC’s policies on FPPR. Its report stated that it had no remit to examine CQC’s interpretation of Regulation 5.

In contrast, Tom Kark QC who has been conducting a a review of FPPR in the NHS, raised the possibility of writing ‘red lines’ into a future Fit and Proper Person test, including the serious mistreatment of whistleblowers.

This the relevant passage from an agreed record of an evidence session with Kark on 30 August 2018:

It remains to be seen if Kark will recommend this in his final report, or whether the government would adopt it if he did. But it is vital that a more robust approach is taken and that there is no permissiveness regarding whistleblower reprisal and suppression by senior officials.

PHSO has no powers of enforcement. It can only recommend. PHSO recommended that CQC should apologise and learn from the Vasco-Knight FPPR debacle, but this already looks futile.

At PHSO’s suggestion the CQC has issued an apology to South Devon whistleblower, Clare Sardari, but this was was so grudging that it only added insult to injury: 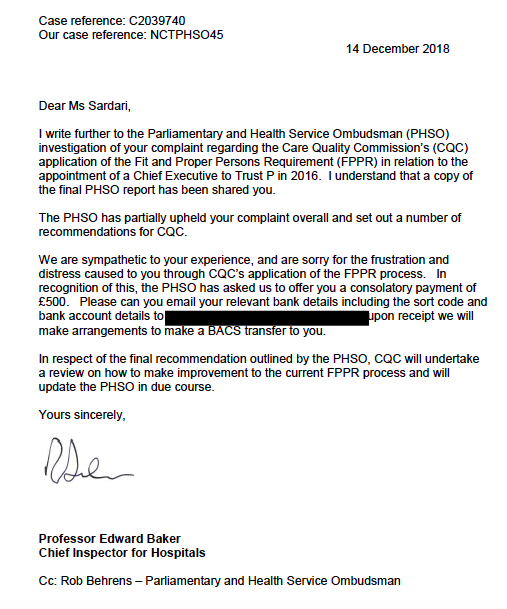 CQC indicated in the “apology” that it will carry out yet another review of its FPPR practice, but the regulator appears unwilling to genuinely do its duty.  It may be more careful to cover its tracks in future, but the bias against whistleblowers will most likely persist. 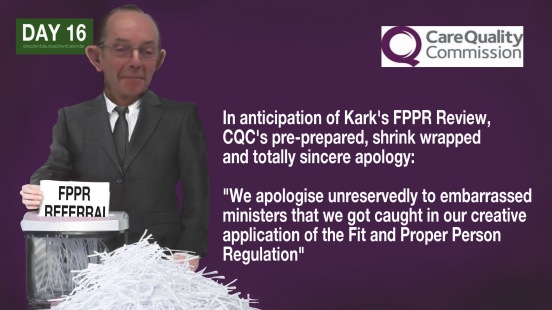 Neither have all those who protected Vasco-Knight, and who continued to help her after her wrongdoing was exposed, been held to account. The full scale of the governance failure has been obscured by NHS England, NHS Improvement and CQC closing ranks.

According to PHSO, the NMC was unsure if concerns raised about Paula Vasco-Knight were isolated incidents. It would be surprising if they were. It is more likely that opportunities to stop her were missed.

It is also quite possible that even as CQC ‘apologises’ for the Vasco-Knight FPPR debacle, it is concealing other FPPR failures, in the way that it concealed FPPR failure at Kettering General Hospital NHS Foundation Trust.   CQC’s economy with the truth only came to light because of an FOI request to the trust.

Nor has there been any recommendation for CQC to review all the many other FPPR referrals that it spiked, allowing unfit and unsafe directors to continue unimpeded in the NHS.

It is useful that PHSO has at least partially upheld the complaint against CQC, but this will be mere theatre if there are no statutory changes which embed real improvement

Clare Sardari has written to the Secretary of State calling for managerial regulation and reform of UK whistleblowing law:

I write as a seriously harmed NHS whistleblower to ask that the government takes more effective action on ensuring that senior NHS managers are Fit and Proper Persons.

An Employment Tribunal concluded that after whistleblowing, I and a colleague suffered serious detriment at the hands of disgraced former chief executive Paula Vasco-Knight and my former trust, South Devon Healthcare NHS Foundation Trust. The Tribunal also concluded that there had been serious dishonesty by our former employing trust in its attempts to suppress our disclosures of nepotism and its concealment of a related, unfavourable report. Vasco-Knight was suspended and then resigned after the Tribunal issued its judgment.

Despite the Tribunal’s damning findings, senior NHS managers and regulators rallied  to protect Paula Vasco-Knight and provided her with well-paid locum work. With their help, she was recycled to two Board positions at St Georges. The CQC protected her and perversely shut down an FPPR referral. In my view, it kept this decision quiet, to allow her promotion from COO to CEO at St Georges.

St. Georges’ 2017/18 annual report  shows that the trust paid £470K in total to the locum agency through which Vasco-Knight worked for the trust, for just a few months.

It all ended in more predictable scandal when a financial fraud by Vasco-Knight against the NHS emerged in 2016 and led to her conviction. It transpired that NHS England had known about the fraud  for over two years before the scandal became public.

Vasco-Knight falsely accused a former co-worker who was dragged into the scandal. There are still unanswered questions and I am concerned that the full extent of the governance failures has not yet been admitted by senior NHS officials.

It is now also clear to me from recent developments that the CQC remains unrepentant about its handling of the FPPR referral on Vasco-Knight. Whilst CQC may be more careful not to be caught out in future, the regulator’s attitude does not give me confidence that it has genuinely reflected or will act without reservation to defend the public interest in the future.

The system remains populated with too many senior officials who collude, cover up and protect each other. The fundamental problems are that the NHS too often selects the wrong people for promotion into managerial roles, and it has no rigorous system for developing and accrediting them.

Paula Vasco-Knight was promoted by the NHS Leadership Academy, which for all its superficial rhetoric has singularly failed to embed the right values.

I call on the government to introduce long overdue measures to tighten up the selection, development, accreditation and regulation of NHS managers.

I also call on the government to reform UK whistleblowing law to mandate the proper handling of whistleblowers’ disclosures, provide proactive protection and robustly deter reprisal.

If my case had been properly handled from the outset, this would have saved the public purse millions and avoided serious harm to all the individuals affected by the above trail of devastation.

CQC chief executive Ian Trenholm has further disgraced the CQC by dismissing the PHSO’s findings, and effectively taking back even the grudging apology made to Clare Sardari by his Chief Inspector of Hospitals.

Trenholm hit back at PHSO through an article for the Health Service Journal, which featured Trenholm’s lengthy, self-justifying rant.

A complaint has been made about this behaviour and parliament has been asked to consider what should be done when organisations defy the PHSO in this way, via evidence to  an upcoming PHSO scrutiny hearing by the Public Administration and Constitutional Affairs Committee.

The CQC’s recalcitrance is all the more remarkable when FOI data shows that the PHSO in fact – and improbably – finds in CQC’s favour in the great majority of cases:

Of 354 enquiries received about CQC between 2009 and 2015, PHSO accepted only 17 for investigation, had completed 11 investigations, and had not upheld any at the time of the FOI response:

The National Guardian’s Day Out with the PHSO: Claims & Rebuttals

The PHSO findings of CQC maladministration were widely covered including by the BBC and ITV. These are some of the print stories:

Daily Mail – Health regulator slammed for giving a top NHS job to a fraudster under investigation for paying her husband £11,000 in public funds to write a research paper he never completed

3 thoughts on “Sorry is the hardest word: CQC, Paula Vasco-Knight and Regulation 5 Fit and Proper Persons”