The Healthcare Safety Investigation Branch (HSIB) has been erected as a temple to Just Culture and Human Factors theory.

It was established in response to a parliamentary report which was rightly critical of highly variable NHS incident investigations and persistent failures of learning.

The temple has however been dogged by concerns about cronyism and controversies.

In the last week, it was reported that the head of HSIB had his knuckles rapped for claiming unusual expenses.

The Air Accident Investigation Branch where Keith Conradi was previously the Chief Investigator, has refused to disclose past staff surveys including from the period of his tenure.

This is troubling behaviour by a public body which should understand the importance of psychological safety in building a safety culture.

There has also been considerable controversy about so-called HSIB ‘safe space’, which many patient safety campaigners are concerned will result in important information being improperly hidden from patients and bereaved families.

The government’s enthusiasm for safe space is based on a claim that it is necessary for staff disclosures to HSIB to be protected, in order to encourage full disclosure.

This rings hollow when seen in the context of general government inaction on whistleblower protection, and its acceptance of the NHS’ continuing and frequent use of gags.

Incredibly, the government even flew a kite on whether ‘safe space’ could be extended to investigations by trusts, but this was met with an outcry. The government has temporarily retreated on this front, but Jeremy Hunt has left the door open:

For an organisation that claims to be interested in protecting sources in order to foster reporting, HSIB has been stubbornly resistant to genuine engagement with whistleblowers.

This is the correspondence with HSIB to date, which includes exchanges with a Department of Health Deputy Director who was embedded at HSIB from inception:

The initial phase of HSIB’s establishment lacked transparency. Enquiries about whether HSIB was educating itself about whistleblowing and making provisions for whistleblowers were variously ignored and deflected.

Eventually, HSIB claimed that there had been some whistleblower input into the design of its processes, but when it eventually published its operational details, whistleblowing was not mentioned.

Moreover, I have seen current documentation which supports the impression that HSIB has not hitherto done any substantive work on incorporating whistleblowing into its protocols, despite claiming to have done so. I am not in a position at present to share this documentation. This in itself is part of the lack of genuine inclusiveness and transparency by HSIB.

The continuing absence of whistleblowing from HSIB’s protocols is  despite the fact that HSIB eventually admitted in April 2017 that it was a ‘Prescribed Person’ under UK whistleblowing law, by virtue of being constituted as a part of NHS Improvement. This means that it has a legal duty to formally receive and record whistleblower disclosures.

As I write, HSIB still has no published, specific protocol for receiving and handling whistleblowing disclosures.

HSIB has also apparently distinguished itself by refusing to investigate any of the patient safety issues raised by Dr Chris Day’s whistleblowing case:

After considerable pushing, HSIB agreed in March 2017 to consider a process of open engagement and meeting with whistleblowers. This meeting never materialised, and HSIB ignored an enquiry in November 2017 about this.

In parallel to this, HSIB then established an advisory panel, through a competitive process, which initially comprised seven members but had no whistleblower.

Mysteriously an eighth member later appeared in the minutes of the first panel meeting, which took place on 13 October 2017: Jennie Fecitt (Stanley) a member of the organisation Patients First.

For those unfamiliar with Patients First, it is an organisation which considers itself to be a charity.

When questioned about this irregular addition of an eighth advisory panel member, HSIB was slow to respond and vague about the process by which this appointment had been made.

After three months, HSIB admitted that this late appointment had not made through an open process.

This is the full correspondence:

This is a recurring pattern, where NHS bodies seek to create the impression of inclusivity when they may be in fact behaving in the opposite fashion.

This is a classic method of selecting preferred voices, and shutting out the most rigorous challenge and dissent.

The rewards for individuals allowed into the club typically include the usual NHS puffery and the swish of more doors opening to other opportunities.

Indeed, NHS England and NHS Improvement installed another Patients First member in a position of leadership on the persistently ineffective NHS whistleblower employment support scheme, without any apparent open process of selection. Trebles all round. But more of that another time.

A non-whistleblower member of the Advisory Panel has now asked HSIB about how it will approach the issue of super-gagged whistleblowers. Keith Conradi has agreed to seek legal advice. This could presage interesting developments.

However, if AAIB will not even release staff surveys from under Conradi’s reign, it is difficult to imagine that he will help unchain NHS staff.

Nevertheless, his agreement to explore the issue is at least a tacit acknowledgment that there is relevant safety evidence lurking behind gags, so it will be interesting to watch this matter unfold. 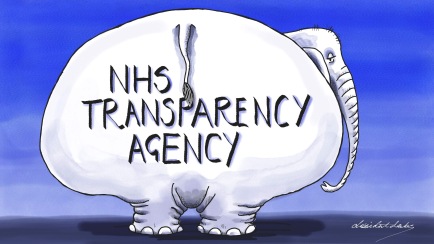 The Assimilation of Whistleblowers