As part of the establishment of the Healthcare Safety Investigation Branch, there was a proposal by the related Expert Advisory Group that there should be a national Taskforce on Just Culture:

It has become evident since the weekend that Jeremy Hunt has launched the Just Culture Taskforce by asking a small inner circle to kick off the process. The group say they will bring different thinking to transform NHS safety culture. 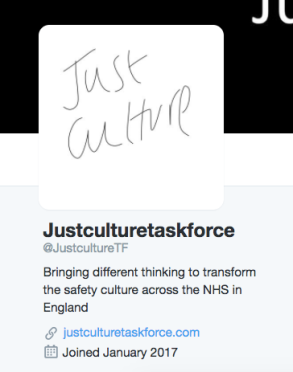 The open letter calling for this was sent today and is provided below.

BY EMAIL via NHS Litigation Authority

I write as a member and a critical friend of the Just Culture Taskforce ‘movement’, having applied to join and having been accepted by Suzette Woodward of NHSLA.

I am writing to respond to your tweeted open letter. 1

It is very welcome that you now acknowledge there have been errors regarding the lack of diversity of the Taskforce. Indeed, your work on learning from errors and Human Factors is widely valued.

As the Just Culture Taskforce is a government instigated and publicly financed project, it is appropriate to re-visit Lord Keith’s comments on the importance of people being allowed to criticise the government:

Many were mystified when the Just Culture Taskforce launched last weekend, with a twitter account and unofficial looking WordPress website. 3 The website gave very little information about the origins and nature of the project. The website stated that the Taskforce was ‘not an organisation’ but a ‘movement’. This was repeated in tweets and correspondence by Suzette Woodward. 4

After I asked questions by twitter and email 5 about the context of this initiative, you advised that:

I asked you for the name of the DH contact. 7 I received no reply but I now gather that the two DH senior officials are members of the core group: Tim Jones Head of Patient Safety and Service Quality (formerly the DH Head of News) 8  and Paul Stonebrook DH Senior Policy Adviser. 9

As you may be aware, I have since formally asked the DH for information about terms of reference, how the Just Culture Taskforce was established, whether it is subject to DH Equality and Diversity policy, any identified outcome measures and arrangements for future transparency, as regards whether the proceedings of the Taskforce will be subject to Freedom of Information provisions. It would have been better of course if it had not been necessary to resort to FOI, or to have to do so again in future.

To my surprise, the Just Culture TaskForce’s website was subsequently arbitrarily edited, with substantial deletions. This is despite the fact that it is customary for official records to be transparent, and added to, not removed. Membership details of the core group have now been removed. To my great concern, I see that even the original NHSLA contact email address and contact portal have been removed.

Regarding your comment “..in deliberately sharing information at an early stage before the process had been better developed I created some confusion and suspicion”1, I do not think it was sharing of information that caused concern. It was that a group of individuals had been assembled to take this project forward without any evidence of due process, and without any public consultation. It was clear that important decisions had already been made about this project – such as adoption of a reportedly unconventional leadership model – without the involvement of all concerned. There was in fact a lack of information about many things. When I later requested information as a member of the ‘movement’10, I was told that it could not yet be provided. 11

I have flagged to you that I think the way in which the Taskforce was established so far is an example of club culture, even if the club lacks insight into this. You thanked me for doing so politely, but you disagreed.

In your open letter, you characterise the many objections raised so far about the Taskforce as “fear and mistrust”. 1 Rather,  I think it would be fairest to see them as evidence based arguments against the manner in which this project has been handled.

In all, I think the project has been poorly handled by the Department of Health. There is no evidence of staffside or whistleblower involvement from the outset. This is an extraordinary omission at a time when there are serious morale issues in the NHS. From the staff survey, we know that almost half of NHS staff do not feel confident that concerns would be properly addressed by their organisation. 12  Any effective project on Just Culture must involve staff and those with lived experience of suppression from the outset.

I am sure you entered into this project in good faith. I hope you can see now why the handling of this project has been inimical to Just Culture.

Whilst you, Suzette Woodward and the Taskforce website originally indicated that there would be a different leadership model, what is now clear is that there is a “core group” which has power, and is distinct to a “wider taskforce” (Suzette Woodward’s phrase) which anyone can join. 13 It does not matter that, as Suzette Woodward has maintained, you are not employees. 4 As members of the core group, you are all in a privileged position of influence and greater access to information about a nationally important project.

Accordingly, I call on all members of the current Taskforce core group to support Just Culture by stepping down and asking the DH to start again from scratch.

What is needed first is a process of totally open public consultation on what a Just Culture Taskforce should look like, how it should be established and how it should be governed. This is a highly sensitive, publicly funded government project, with ongoing contribution by senior DH officials. Thus, there needs to be clarity, real inclusiveness, fairness, structure and formality as to how its business is done.

All other members of the Just Culture Taskforce core group 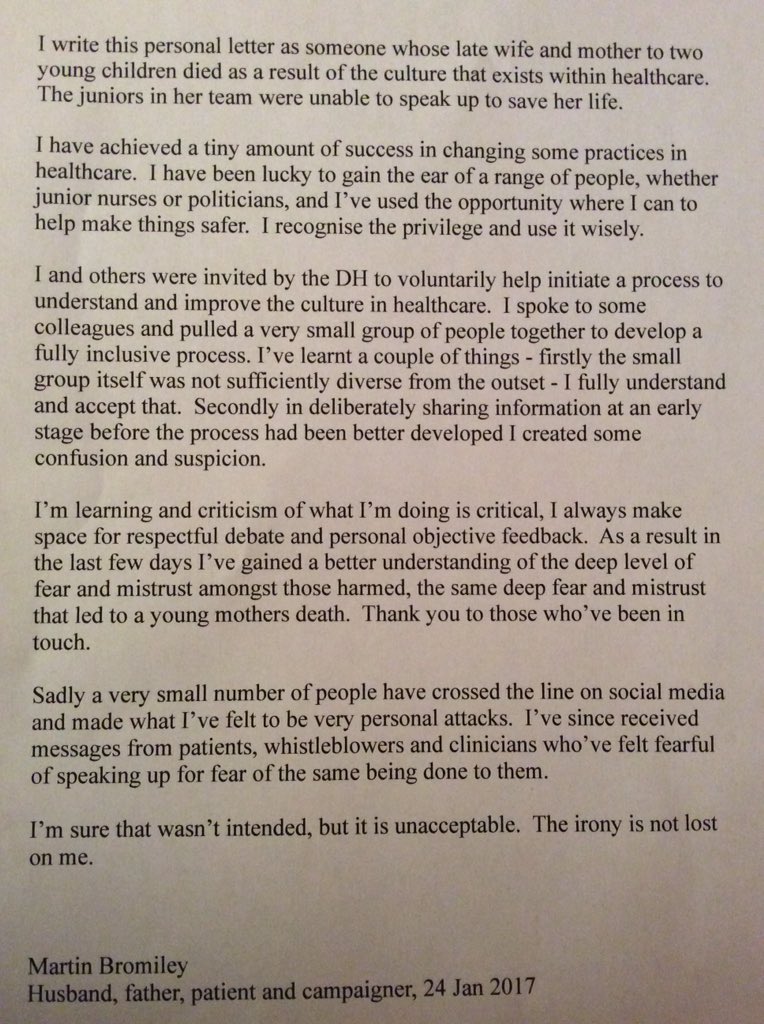 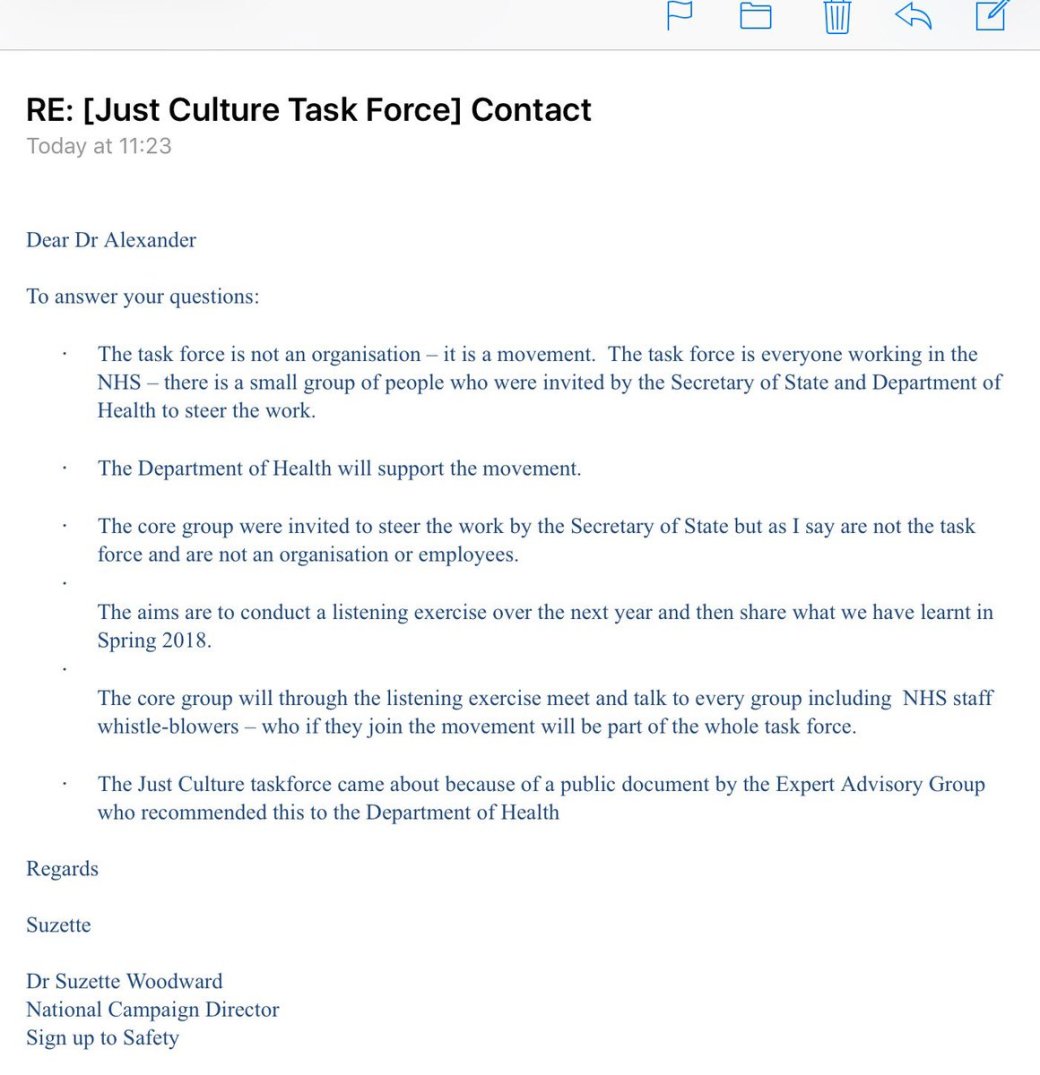 Thank you for your email.  I have just sent you an email answering your questions.  I have repeated them below:

The task force is not an organisation – it is a movement.  The task force is everyone working in the NHS – there is a small group of people who were invited by the Secretary of State and Department of Health to steer the work.

The Department of Health will support the movement

The core group were invited to steer the work by the Secretary of State but as I say are not the task force and are not an organisation or employees.

The aims are to conduct a listening exercise over the next year and then share what we have learnt in Spring 2018.

The core group will through the listening exercise meet and talk to every group including  NHS staff whistle-blowers – who if they join the movement will be part of the whole task force.

To assure the patient groups and others on this email list – we will be engaging with you all in this process – it is very early days and we will inform you as we progress.

Can I ask how this task force is financed, whether its accounts will be published and which NHS body is overseeing or has stewardship of this project?

Could you also let me know how the members of the taskforce were appointed, and by whom, and what the selection criteria were?

Do you have terms of reference and any timetable for your work? If so, could these be shared?

Also, I don’t see (to my knowledge) that there are any NHS staff whistleblowers in this group. This seems an extremely serious omission. Please could you explain why this is so, and if you agree that it was an omission, whether you will now put that right? If so, how?

I have to say that a Just Culture taskforce that is assembled without public consultation is something of a contradiction in terms.

7 Tweeted question about the name of the Department of Health contact:

Thanks for your email – or the screenshot of your email (below). I’m not sure what happened as I gather some cc’d people received a copy of your reply, but my copy never arrived.

Notwithstanding, I gather from your tweets that anyone can join your movement.

What happens now and who’s making the decisions about how I can contribute?

Who’s doing the organising/ admin, that I can link with?

cc All other Task force members

We are building up the list of interested people and would be really keen to involve you.

We will be in touch soon.

“Fifty six percent of staff had confidence that their organisation would address their concerns if they were raised.” 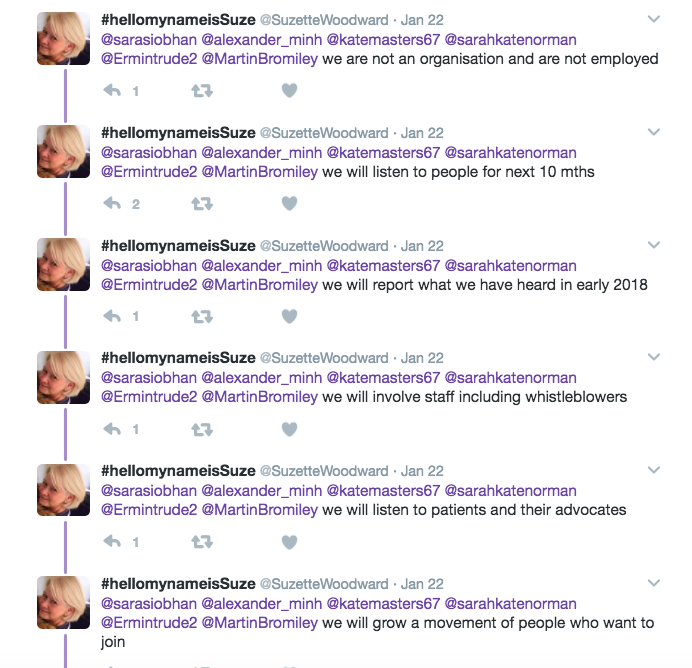