The much criticised Care Quality Commission has tried hard to re-brand itself but the changes are superficial, and the values at its heart remain highly questionable. The CQC remains a defensive organisation, full of self-justification. CQC’s attitude towards its part in the profoundly shocking care home death of Ivy Atkin is a case in point.

Ivy Atkin an 86 year old retired dressmaker suffered a barbaric death on 22 November 2012 after gross neglect at Autumn Grange care home in Nottingham. Her case has been extensively reported. In summary:

“High Court judge Robert Jay said that when Mrs Atkin was found, she was skeletal, severely dehydrated, lying on a bed soaked in urine and had a large open, pressure sore at the base of her back which was contaminated with faeces.”[1]

Although discovered in extremis, Mrs Atkin was reportedly not admitted to hospital, but was moved to another care home where she died shortly after, weighing 3 st 13 lb.

Other residents also suffered severely. Some had unexplained injuries.

The care home director was jailed for corporate manslaughter in February this year.[1]

Private Eye covered the scandal, and noted that Autumn Grange had been given a clean bill of health before the abuse was uncovered. [2] 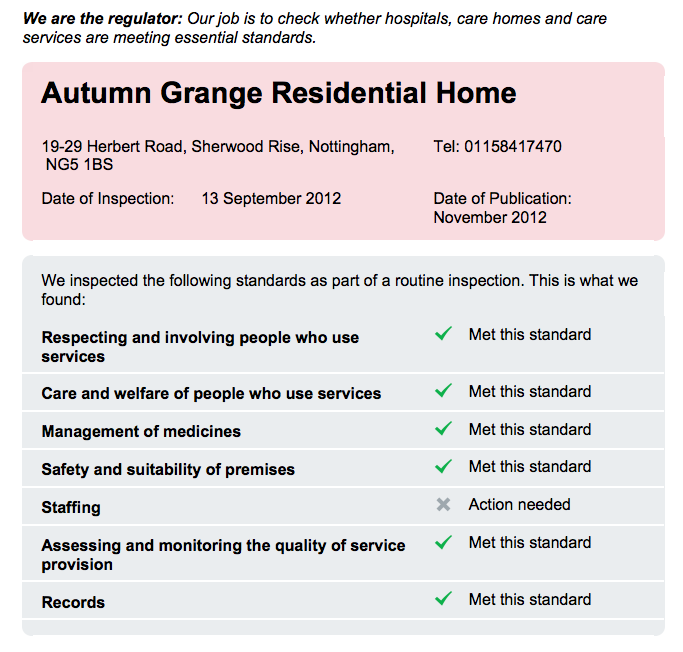 An inquest has now found that Ivy Atkin was unlawfully killed:

“Health inspectors were criticised by the Nottinghamshire Assistant Coroner for “missing opportunities” to uncover conditions at the home.”

[The coroner reportedly also] “…said in the light of concerns raised about conditions at the home, the inspection “should have been more rigorous” and inspectors failed to “be proactive”. [3]

According to the BBC, Lesley White the CQC inspector who inspected Autumn Grange weeks before Ivy Atkin’s death told the inquest: “…she had not “missed anything” in an inspection in September and that a home could go “downhill quickly”.”

The BBC had not yet received the CQC’s response to the inquest’s conclusion.

In February this year after the above corporate manslaughter conviction,  I asked if CQC had conducted an internal review into its inspection activities at Autumn Grange.

The CQC replied that it was contributing to the local authority’s serious case review, but had not undertaken any internal review of its inspection activities at Autumn Grange. The CQC made no comment on why Mrs Atkin had not been taken to hospital, and added:

“The way CQC inspected services in 2012 is very different to how inspections are now carried out….Our approach to monitoring and inspecting adult social

care allows us to get under the skin of services better than ever before. We have more inspectors with greater expertise and we are working more closely with our local partners to respond to concerns.” [4]

This morning, in response to a campaigner voicing concerns that the CQC is reactive and not sufficiently proactive in its inspection approach, a CQC Non Executive Director delightfully tweeted: “Er, this was four years ago”

PS It’s anybody’s guess how many complaints have been made about this CQC NED’s social media behaviour. I gather the CQC refuse to divulge the number. Toodle-oo.

CQC Board papers for the CQC Board meeting of 16 November 2016 show that CQC has now been issued with a coroner’s warning report regarding Autumn Grange. CQC has also now undertaken an internal review of its handling of Autumn Grange, which is yet to be published:

A review of 66 coroners Reports to Prevent Future Deaths against CQC inspection reports. This has revealed that despite criticism a year previously, CQC’s response to coroners’ warnings about care home deaths remained variable and slow, and that there were no published responses to most of the coroners’ reports that had been addressed directly to CQC as a named respondent.

A review of all current CQC inspection reports on mental health trusts revealed that CQC presented deaths data in an inconsistent, incomplete manner and sometimes did not even refer to deaths or report coroners’ warning reports fully or at all. 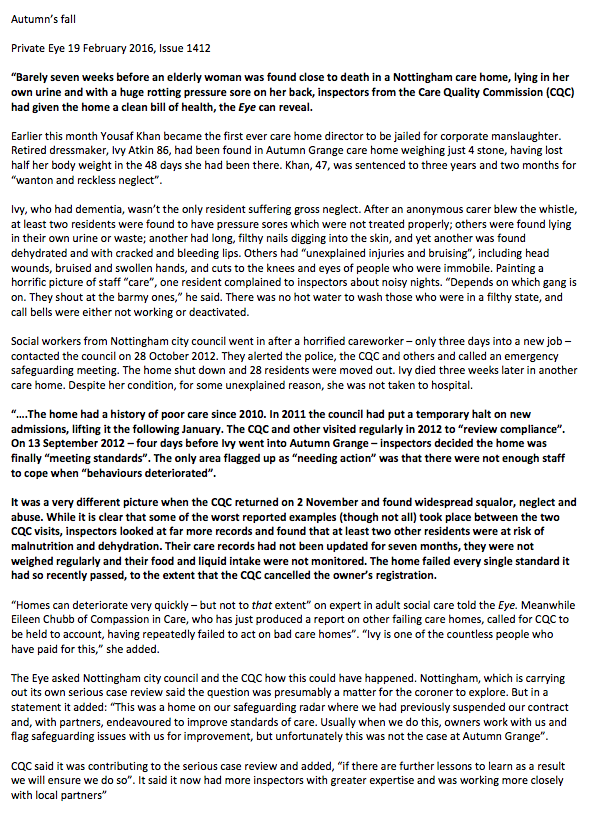 2 thoughts on “CQC’s “better than ever”…or didn’t you know?”