The British Medical Association (BMA) is the main union for doctors. It is not a good friend to whistleblowers.

The annual ritual of renewing my BMA membership came up. I dithered a bit. I have been a BMA member for thirty years. But after adventures in whistleblowing, I no longer have a medical career. I wondered if the £163 renewal fee – reduced for unwaged members from the standard fee of £443 – could be spent on more joyful things. Perhaps some nice wine, a good film, even new socks, are all of more use to me than BMA membership.

When I asked the BMA for a copy of its 2014 submission to Robert Francis’ Freedom to Speak Up Review on NHS whistleblowing, it was slow to disclose this, and ultimately I found the submission uninformative as regards the BMA’s activities on whistleblowing. [6]

When I asked the BMA for data about whistleblowing cases, it was slow to respond and shone little light:

“…we do not have records going back 10 years…..Our solicitors have informed us that since 2006 they have had five Public Interest Disclosure Act (PIDA) claims which have been settled via settlement agreements/COT3s.” [7]

When I heard that the BMA had set up a task and finish group to review how it supports its members to raise concerns, I asked for information about this. The BMA was slow to respond, and when it finally disclosed the report from this task and finish group, I was embarrassed on the BMA’s behalf. This is the uninformative report in all its seven paragraph glory: bma-task-finish-report-raising-concerns-c84

I cringed when I saw that the BMA implied that a key solution to addressing reprisal against whistleblower members was to help them to be more tactful:

“The service would include offering advice to members on the use of language and the tone in which their concerns might be expressed.”

Shhhhurely the BMA meant to say: “Robustly represent and defend whistleblower members to send a clear message to employers that doctors who raise concerns cannot be casually picked off, and that the profession will exercise its prerogative to focus on patients’ interests?”

I won’t even mention what some fellow campaigners said to me when they saw the BMA’s report.

I asked the BMA for more details and supporting documents seven months ago. Guess what, I’m still waiting. [8]

In particular, I’d like an answer on whether and how the BMA has commenced and or evaluated, an ‘early intervention’ pilot scheme, that it told me it would undertake on supporting members with whistleblowing.

I’d also like to see the new, improved whistleblowing stats that the BMA told me – in March 2015 – that it would start collating:

I see the BMA now claims a victory on defending junior doctors’ rights to whistleblow against Health Education England (HEE). [9] [10] This ain’t so at all. The “I have a piece of paper” BMA spiel means absolutely nothing. Junior doctors have had a right all along to challenge HEE, as a public body subject to judicial review, in the High Court. But why should they? And would the BMA fully support costly hearings to conclusion, or pressure members to accept sub-standard settlements? The BMA has not managed to secure comparable rights for junior doctors to take their cases against HEE to the Employment Tribunal under PIDA. The well known case of Dr Chris Day continues on this matter. [11] Notably, on his campaign website, Dr Day wrote thus about the BMA:

“Suddenly, 5 working days before the claim had to be submitted and before the delayed Trust and Deanery formal investigations had reported, the BMA withdrew all legal help from the case and my BMA Senior Industrial Relations Officer went on “special leave”.” [12]

The BMA says that its new agreement gives junior doctors the same rights to sue HEE for whistleblower reprisal as would be afforded under PIDA. Has the BMA forgotten that it previously acknowledged that PIDA legislation is weak and very unsatisfactory? [1]

All PIDA gives you is the right to sue for compensation after you have suffered serious detriment, and your career – and probably health – are in tatters. It does not protect individuals and there is zero evidence that it deters reprisal in general. Austerity and harsh cuts have magnified an NHS culture of cover-ups and employer bullying. PIDA claims by health and social care whistleblowers rose sharply last year.

What has the BMA done to lobby for reform of the law that it has admitted is ineffective? I can’t see any evidence that the BMA has done much about PIDA, but perhaps the BMA can correct me if I wrong.

So, to return to BMA binary:

One year on from my article above, there is little to celebrate about the BMA and whistleblowing.

The BMA continues to spin copiously about its good intentions towards whistleblowers.

Yesterday a kind member of the public sent me a copy of an email of 26 September 2017 from the BMA, which they received after questioning the BMA about its behaviour in the much reported case of NHS whistleblower Dr Chris Day.

Attached to the BMA’s email was a remarkable apologia which defended the BMA’s position to the hilt, and cast aspersions on criticisms of the BMA made by the Day camp.

The BMA’s email of 26 September claimed that its apologia had been published. However, a search by the document’s title revealed a page on the BMA’s website that was last updated on 20 September. It featured no published document and only the message “This content is under review”.

It seems to me that despite a change in BMA Chair of Council over the course of the year, the BMA’s spots look much the same.

And the debate about whether junior doctors’ whistleblowing cases should be dealt with in the Employment Tribunal or the High Court is ultimately something of a distraction when set against the pragmatic reality of BMA merits assessments in whistleblowing cases. That is to say, it would be immaterial what technical legal rights a doctor has if his or her union chooses not to fund the necessary litigation. As the BMA has not yet opened its files to me on the statistics that it claimed in March 2015 that it would start keeping on case decisions, these waters remain unfathomed.

The accompanying BMA email of 26 September 2017: 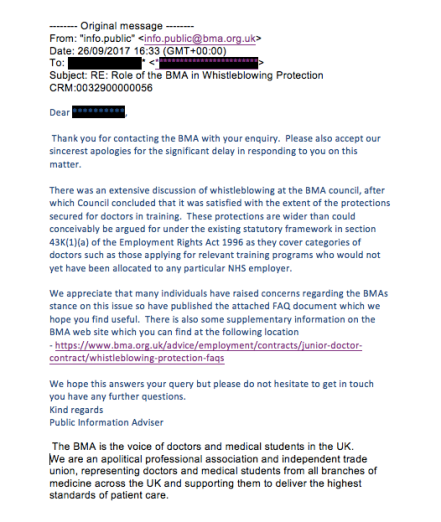 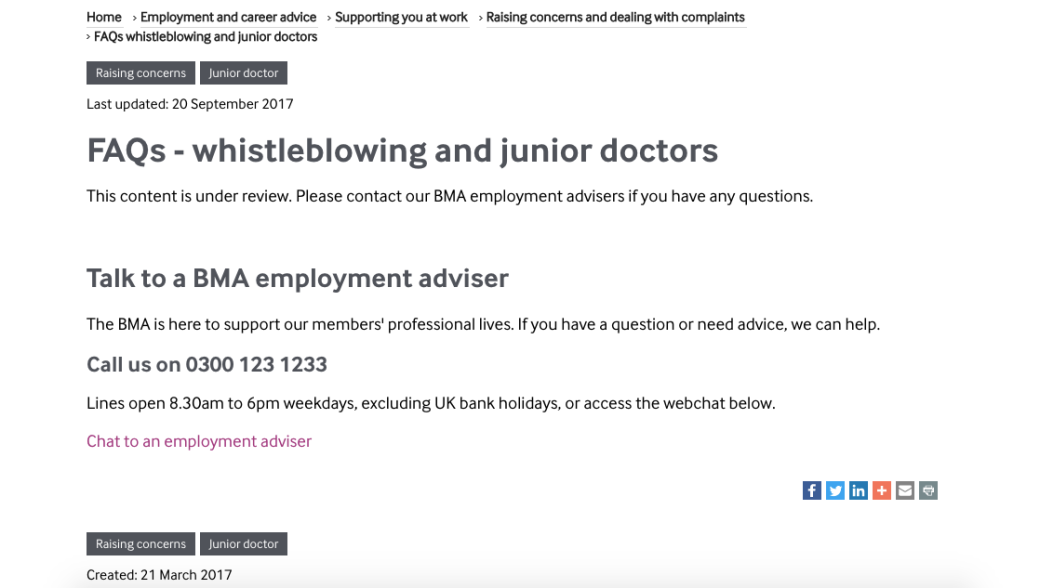 Sir Robert’s Flip Flops – this describes a central weakness of the Freedom To Speak Up review – how Francis u-turned on accountability, criminal sanctions and deterrence of whistleblower reprisal

No one believes Jeremy Hunt on patient safety and whistleblowers, not even his own appointees – a summary of continuing tokenism by government and how the new National Guardian’s office, for NHS whistleblowing, is designed to be ineffective

Further to my last letter to the BMA of May 2016, in which I asked again for copies of supporting documents from the BMA Task and Finish group on raising concerns, and feedback on progress of the BMA’s proposed ‘early intervention’ pilot scheme for supporting members who whistleblow, I would be very grateful for a reply.

I attach a copy of that earlier correspondence.

[3] Dr Mark Porter in Parliament: The whole truth and nothing but the BMA’s truth