Sir, Tomorrow is the anniversary of Sir Robert Francis’s report into how NHS whistleblowers are treated. Since its publication there has been no evident, meaningful change. To our knowledge, not a single sacked whistleblower has been found comparable re-employment. Not a single trust director has been reprimanded under the fit and proper persons regulation. Sir Robert recommended a system of “guardians” to act independently and to help to protect whistleblowers. Controversially, the part-time national guardian is overseen by the Care Quality Commission and has a restricted remit and no statutory powers. NHS bodies have also appointed mostly internally to local guardian posts. Injustices continue, with particular impact on “protected” groups. We urgently need the following: an independent body, reporting to parliament, with powers to investigate and remedy poor whistleblowing governance by public bodies; enforcement of effective investigation of concerns and an appeal mechanism against ineffective local investigations by employers; full reform of whistleblower protection legislation; reform of NHS disciplinary processes and fully independent appeal panels, to discourage kangaroo courts; managerial regulation to apply to all grades of managers; interim financial relief for whistleblowers who are seriously struggling, pending establishment of NHS England’s re-employment scheme, which is many months away.

We urge the health committee to consider our proposals and to hold hearings on whistleblowing.

Cross reference this item to 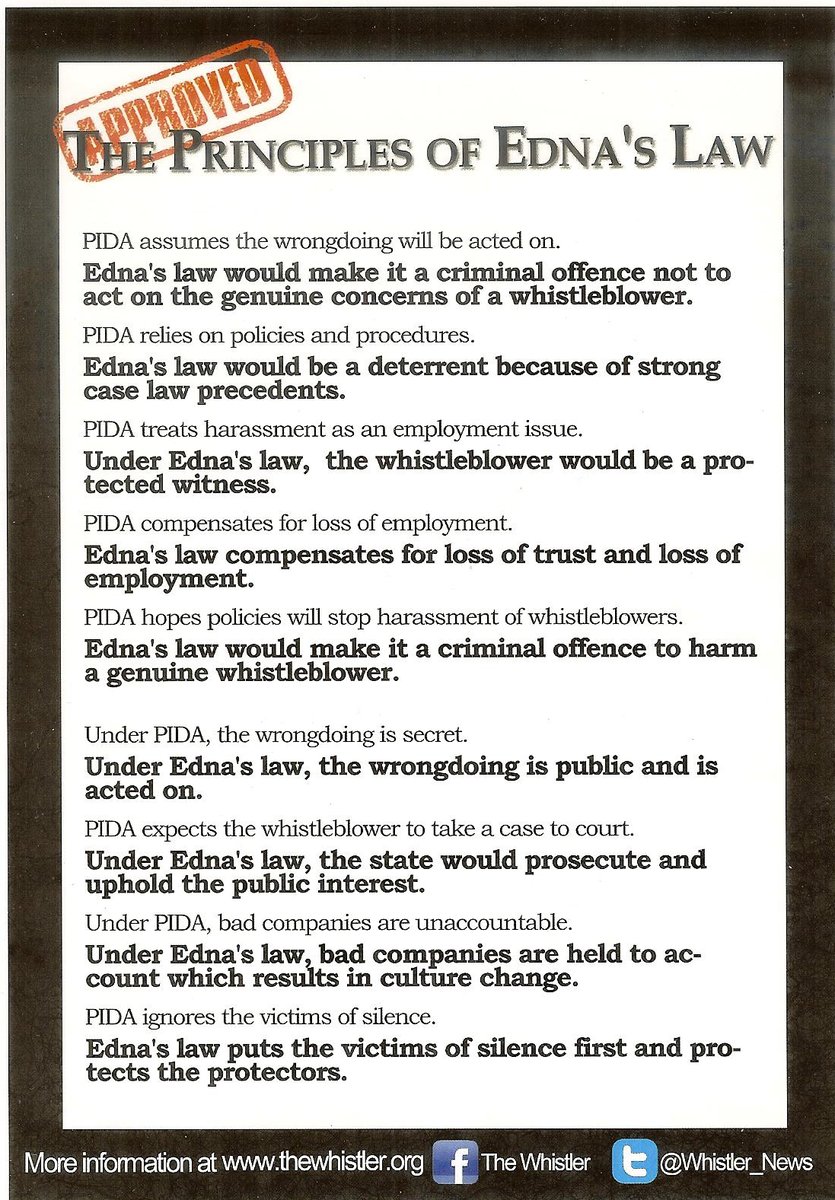 2. Recommendations by Prof David Lewis, Professor of Employment Law and researcher on whistleblowing.

Professor Lewis was Robert Francis’ lead researcher on the Freedom To Speak Up Review.

Four days after the Freedom To Speak Up Review was published, Prof Lewis wrote on 15 February 2015:

“The Guardian has a laudable track record of supporting whistleblowing. However, in commenting on the impact of the Francis report on the culture of speaking up in the NHS (Editorial, 12 February), you demonstrate a rather conservative approach to legislative reform. First, there is no mention of possible criminal sanctions. Citizens who break the Official Secrets Act commit an offence, so why shouldn’t those who victimise people raising concerns in the public interest? TheProtection from Harassment Act can be invoked if the narrow definition of harassment is fulfilled, but, in my opinion, outlawing any form of retaliation against whistleblowers would send out a valuable message about what society expects.

Second, you do not point out that only “workers” are covered by our whistleblowing legislation. However, it is clear that those who are in a position to raise concerns may not have this status – for example, patients and their families. Other countries now recognise the role that the public can play in exposing wrongdoing; in this important respect, the UK no longer provides an international model.
Professor David Lewis
Director, Whistleblowing research unit, Middlesex University”

Prof Lewis’ further recommendations were outlined by an article on 18 September 2016: