The octopus is an old emblem of the Mafia, coiling and insinuating its many tentacles into different parts of society.

In fact, governments may outdo any organised crime syndicates in their abuse of power, subterfuges, rackets, stratagems for unjustly dipping into the common man’s pockets and their parking of  boots on necks

Governments may be dictators who permit token opposition or field fake candidates, or purportedly liberal governments that pretend to cede power to ‘independent’ bodies whilst keeping firm grip.

Domestically we can probably expect worsening in repression under the authoritarian, press-bashing Johnson administration.

For example, the UK Department of Education has just outed some school whistleblowers, probably maliciously.

Traditionally, UK governments have managed whistleblowing through a combination of strategies such as complicity by regulators who do not always act in the public interest, the capture of a few whistleblowers and the cultivation of close relationships with organisations that purport to represent whistleblowers, softening their sting. The late Dr Jean Lennane,  a whistleblower psychiatrist and for many years a transparency campaigner in Australia, had a rule of thumb that most anti-corruption bodies stay honest for no longer than three years, assuming they were sound to start with.

Most recently, the government has audaciously misrepresented an outpost of the Department of Health and Social Care Press Office as the National Guardian’s Office for NHS whistleblowers.

In terms of whistleblower capture,  we have seen whistleblowers take the shilling and progress to promotions and well paid public sector jobs, land paid project work without competition, and secure  business contracts paid from the public purse. In exchange, they have rubbished their peers, generally or specifically, plugged government policy, endorsed discredited organisations harmful to whistleblowers, and provided a synthetic rent-a-crowd to nudge public confidence in government’s fabrications.

Protect, the not-very-oppositional whistleblowing charity has enjoyed a symbiosis with government for over two decades and monopolised the market in providing advice services.

Most public sector bodies have whistleblowing blurb that signposts workers to Protect.

Protect has cruised along on the Employment Tribunal National User Group for years. The purpose of the meeting of this group is for stakeholders to raise concerns.

“The stakeholders use the meetings to raise issues or concerns with the service provided by employment tribunals.”

In the group’s published minutes from February 2016 to the present time, which shows attendance by Protect at nearly all the meetings, I found one comment by Protect staff:

“Item 9 Any other business Roger Easy pointed out his concern in the difficulty in locating whistleblowing cases within the EAT website. The President informed Roger that Nicola Daly was the new EAT Registrar. He would let Nicola know that Roger would write to her about his concerns.”

But perhaps it’s more about the networking with all the other parties at the table: BEIS, TUC, ACAS, EHRC, important lawyers, Law Society, Reuters, CAB, etc, etc.

One wonders where the balance falls between influencing and being influenced.

Neither has Protect been vocal in raising the alarm on the very low success rate of claims under weak UK whistleblowing law (only about 3% succeed at hearing), despite the fact that the charity has routinely gathered stats for years now.

Protect knew the law, the Public Interest Disclosure Act 1998 (PIDA), was weak because Protect has told some whistleblowers to run and not to fight.

Most importantly for NHS whistleblowers, Protect has extended its fraternisation to the National Guardian’s Office. This started soon after the 2016 appointment of the second National Guardian, Henrietta Hughes, who replaced Eileen Sills, the Bolter.

In 2017, reverential messaging about the Freedom To Speak Up followed. For example, instead of challenging Robert Francis about non-evidenced based internal Guardians, Protect simply transmitted his spin that Guardians were “pioneers”.

There has been cross fertilisation. Protect’s Head of Legal headed off to the National Guardian’s Office as the National Engagement Manager, complete with selfies:

A presentation in March 2018 by the former Protect Head of Legal in her new role at the National Guardian’s Office included the following optimistic claims about the effectiveness of NHS trust Freedom To Speak Up Guardians:

In June 2018, I crossed swords with Francesca West, Cathy James’ successor, when she made a comment at a conference on the twentieth anniversary of PIDA, at which she suggested that the government’s Freedom To Speak Up project was progressing well. This was in the absence of evidence and evaluation.

A Protect announcement of a new trustee in October 2018 emphasised the value that Protect placed in its relationship with government, following the passage of PIDA:

“Protect welcomes new trustee and employment lawyer David Widdowson, who has extensive whistleblowing expertise, to the Protect Board.

David is a long-standing member of the Employment Lawyers Association, and a member and subsequent chair of a working party which commented on the two abortive private members bills and then on the bill which became the Public Interest Disclosure Act 1998.  Comments at the consultative stage were influential in the ultimate drafting of the bill and formed the basis of a very successful relationship with the DTi, now BEIS (Department for Business, Energy & Industrial Strategy). He also has trustee experience.”

There is a need to engage, but quite so enthusiastically?

Protect’s messaging about NHS cases in this period has been something of a balancing act. It has criticised some public institutions as part of showcasing its role as an advocate for prominent NHS whistleblowers, but it remained curiously silent about how the National Guardian failed the same whistleblowers.

Protect in fact held data which suggested ineffectiveness of the government’s Freedom To Speak Up model. However, the charity was loath to comment too bluntly on this fact.

The charity’s 25th anniversary report showed that in the three years after Robert Francis published his report of the Freedom To Speak Up Review, the number of calls from healthcare workers to its helpline did not change significantly.

However, there was a drop in the proportion of healthcare callers who were making a first time disclosure: 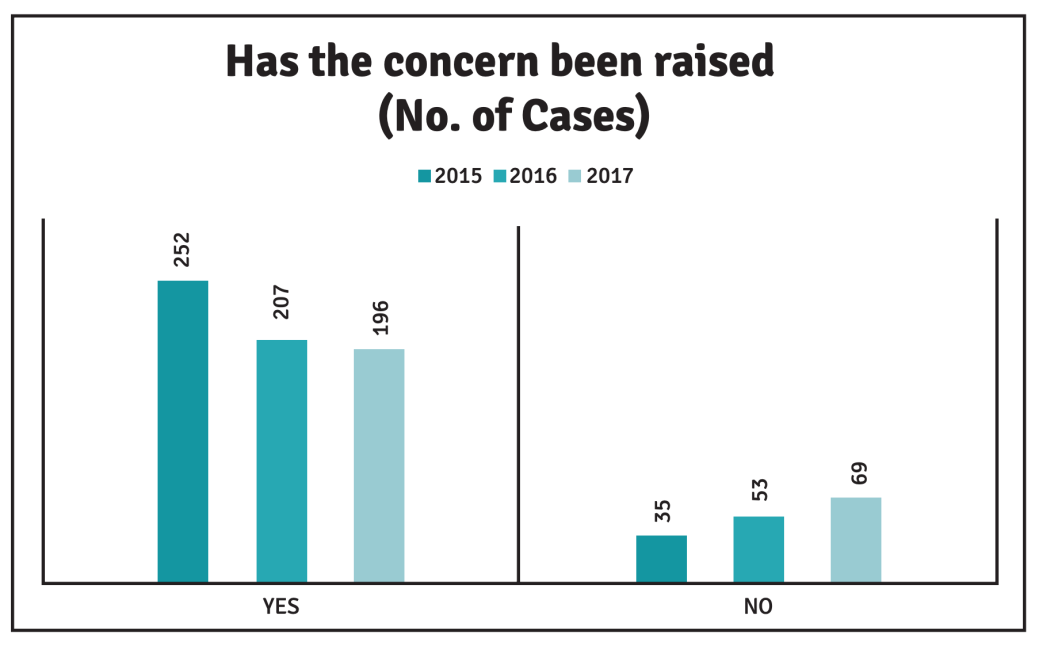 This implied that some healthcare workers had already tried internal routes of disclosure, but had not been reassured by their employer’s responses.

Not exactly a ringing endorsement of the mushrooming Freedom To Speak Up Guardian posts in these three years.

Instead of straightforwardly spelling out this unfavourable finding, what did Protect say?

“We hope the introduction of Freedom to Speak Up Guardians does help to transform the whistleblowing or speak up culture in the NHS. It is early days, and still very much in its infancy, but we know from experience there does have to be top down buy in from senior management, the Board as well as obviously the day to day workforce.”

Protect must surely know that the Freedom To Speak Up model is a recipe for abuse destined for the policy bin, even if the Department of Health and Social Care tries to keep it on life support for as long as possible.

Protect must also know that  the Freedom To Speak Up model was just a re-warmed version of the civil service nominated officer scheme, which has never been properly evaluated and has certainly not transformed whistleblowing governance in Whitehall.

The very serious NHS whistleblowing scandals that are still occurring, such as at West Suffolk NHS Foundation Trust, are abundant evidence that after five years of the Freedom To Speak Up project, nothing has been transformed.

We also have yet to see what role the government had in the whistleblower witch hunt at West Suffolk, which took place in the Health Secretary Matt Hancock’s constituency.

There is therefore a conflict for Protect in commenting on the effectiveness of the Freedom To Speak Up project.

Indeed, Cathy James the charity’s former CEO informed me that roughly 43% of Protect’s income is from the public sector.

How does this influence the level of Protect’s opposition to the government?

Some at Protect may believe in what they are doing, but they need to candidly ask and answer these questions of themselves.

Successive waves of grassroots whistleblowers have campaigned for many years for reform of totally unfit UK whistleblowing law, which is the real change that is needed. Recently the bandwagon has started to creep forwards.

But someone has now tampered with the steering, and several establishment parties are trying to make off with it.

WhistleblowersUK and their Whistleblowing-kerching-APPG want to gallop towards US bounties.

Protect just want to gently re-brand PIDA, doubtless to a mutually beneficial PR fanfare for themselves and the government.

Crucially, none of the Bills doing the rounds in parliament include an explicit, assured mechanism for robust, direct parliamentary oversight and scrutiny.

But then such accountability would shatter the enchantment.

‘Tis a bal masqué, and the music must play…..

2 thoughts on “The Government & Whistleblowing: Or an everyday story of managed opposition?”