CQC was excoriated for a string of very serious FPPR governance failures.

The government eventually caved in and arranged a formal review of FPPR by Tom Kark QC after Bill Kirkup added his voice to the chorus, through his investigation of major regulatory failures at the now defunct Liverpool Community Health NHS Trust (LCH).

LCH was Jeremy Hunt’s MidStaffs: Staff horrendously bullied and their safety concerns ground into the dust in the pursuit of foundation Trust status. Regulators were asleep at the wheel. They later helped orchestrate the recycling of incompetent trust directors who covered up serious safety issues, and frittered money on even a ‘life-sized elephant’ whilst stripping away essential patient care.

The key recommendations of his Review were as follows:

(a) Requiring the design of a set of specific core elements of competence, which all directors should be able to meet and against which they can be assessed when considering whether they meet the FPPT in terms of qualifications, competence, skills and experience.

(b) Setting up a central database so that information about directors is consistently retained and a history is built up in relation to each individual Board level director within the health service.

(c) Requiring that a mandatory reference form be designed, which must be completed by the employer and signed off by a Board level director, when a director moves from health Trust to health Trust.

(d) Extending the concept of the FPPT to Board level directors of commissioners and appropriate NHS Arms’ Length Bodies (ALBs).

(e) Setting up a body which has the power to bar directors where serious misconduct is proved to have occurred.

(f) Requiring the identification and definition of what is regarded as ‘serious misconduct’ justifying barring.

(g) Providing that ‘normal’ disciplinary and performance issues are still dealt with at Trust level.

(h) Amending the appointment rules for commissioners of health services and appropriate ALBs so that they are prevented from appointing somebody who has been disbarred as a director.

(j) Amending the Fit and Proper Person Test to remove the reference to directors ‘being privy to’ mismanagement which we do not think promotes clarity.

The government accepted the first two recommendations. Of concern, Matt Hancock the Secretary of State for Health and Social Care delegated the decision on which of the remaining recommendations should be adopted to NHS Improvement.

Regulators like NHSI have in fact been a key part of the problem. NHS Improvement is notorious not just for recycling erring NHS trust directors like Paula Vasco-Knight,  but also for providing shelter in its recesses for those overcome by the rigours of running provider services.

NHSI has been slow and opaque in its response to the Kark Review. The most information so far was provided in an email of 25 September 2019 from Dido Harding, NHSI Chair:

“As you know, the Department of Health and Social Care accepted the first two recommendations of the Kark Review and asked that NHS England and NHS Improvement engage with a wide range of stakeholders to consider the remaining five. We have subsequently agreed with the department that we should also implement the third recommendation (to introduce a mandatory reference requirement for NHS directors) and that the department would consider the final recommendation (which concerns the application of the FPPR in social care).

We intend to write to the department, setting out our implementation approach to the entire Kark Review alongside publication of the People Plan later this year. My team is currently speaking to a range of people to inform the best approach to implementation and I have passed your contact details on to a colleague, who will be in touch with you separately so that you have an opportunity to inform on our next steps.”

I imagine that if others are interested in contributing to NHSI’s process, they could contact NHSI and ask to be involved.

In the meantime, it seems clear that CQC’s handling of FPPR remains very patchy.

I have had one experience of prompt and appropriate response from CQC recently, which is the first of its kind, but this is set against the seriously questionable handling of another referral.

In October 2018 I referred a director of University Hospitals Birmingham NHS Foundation Trust to the General Medical Council, and then forwarded the GMC referral to CQC, to ask also for an examination under FPPR.

In August this year, after enquiries, Nigel Acheson CQC Deputy Chief Inspector of Hospitals informed me that the FPPR had been accepted but was still ongoing. He indicated that University Hospitals Birmingham NHS Foundation Trust was in the middle of an external FPRR process:

“The Trust are involved in an external process which may take some time to conclude.”

Another person referred the same University Hospitals Birmingham NHS Foundation Trust director to the GMC and also sent an FPPR referral to the CQC. This related to similar but different matters.

Unexpectedly, the same CQC Deputy Chief Inspector of Hospitals refused to consider this additional FPPR referral until the GMC process was completed:

I am not aware of any CQC policy, any law or government guidance which allowed CQC to refuse the further FPPR referral on such a basis.

It was mystifying that CQC advised the second referrer that their FPPR could not be accepted before the GMC process was complete, when CQC had accepted my referral under exactly the same circumstances and CQC knew that there was an active FPPR review underway on the same individual, as a result of my referral.

I have asked Ian Trenholm CQC Chief Executive to account for the apparently arbitrary difference in the way the two FPPR referrals were handled. I have asked him, if appropriate, to investigate if there was collusion between the CQC and University Hospitals Birmingham NHS Foundation Trust to exclude relevant evidence by the second referrer from the current FPPR review.

In addition to the irregularity in CQC’s response in refusing the second referrer’s FPPR referral, University Hospitals Birmingham NHS Foundation Trust itself appears to have acted in a misleading way.

Martin Morton a social care whistleblower asked University Hospitals Birmingham NHS Foundation Trust for the number of FPPR referrals on its directors over the period 1 April 2016 to the present day. He received the following reply on 23 September 2019, which was of course false: 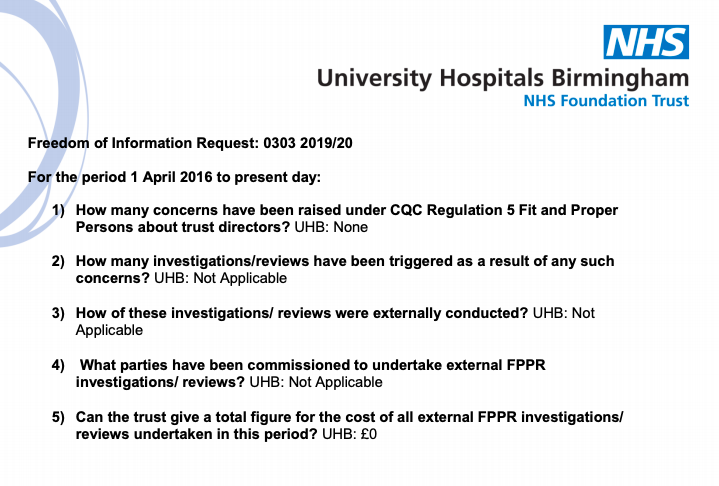 The CQC was informed that the trust had issued a misleading FOI response.

Shortly after this, on 26 September 2019, the trust corrected its FOI response and admitted that there had been a single FPPR referral on a trust director, which was the subject of an external review.

The trust claimed that its original, misleading FOI response was due to miscommunication and administrative error.

“It has come to my attention that the information provided to you within our reply to your FOIA request was incorrect. I have conducted a brief investigation into how this may have occurred and it would appear that there may have been a miscommunication between the relevant members of our Corporate Affairs department. My sincere apologies for this error.”

Even then, it seems surprising that the trust has purportedly received only one FPPR referral, given that one of its predecessor bodies was the troubled Heart of England NHS Foundation Trust, the home of several scandals including the Ian Paterson rogue breast cancer surgeon affair.

I have asked Ian Trenholm to disclose how many FPPR referrals CQC has received about University Hospitals Birmingham NHS Foundation Trust, including its predecessor bodies.

The trouble with our post Truth society and the deterioration of standards in public life is that trust is badly eroded, and little can be taken for granted. Deception and doubt are a self-replenishing toxin, concentrated by every additional casual lie and half truth. One hopes an antidote will come, but it is likely to take many years.

The CQC was asked to disclose the true number of FPPR referrals that it had (1) received (2) passed onto the trust.

FPPR is a poor sop for a genuinely enforced system of accountability. In particular, it has failed to ensure that those responsible for whistleblower reprisal are held to account.

FPPR’s failure and the government’s reluctance to provide real alternatives only serve to emphasise the need for proper reform of UK whistleblowing law: