By Dr Minh Alexander, NHS whistleblower and former consultant psychiatrist, first published by the Centre for Health and the Public Interest  26 June 2018

The deeply shocking Gosport War Memorial Hospital deaths scandal has propelled the unfinished business of NHS whistleblowing to the fore.

The government has claimed that the failings were historical and that it had made improvements in whistleblower protection, but little of substance has actually been achieved.

Many people are under the impression that the well-known Freedom To Speak Up review by Robert Francis in 2015 on NHS whistleblowing addressed the issues. But in reality, it did not.

In the UK, whistleblowing is defined as the raising of concerns in the public interest by a worker, whether to their employer or externally through a range of designated channels (the chief of which are termed ‘prescribed persons’). Ultimately, workers may make a wider disclosure, for example to the media, but for obvious reasons such disclosures need to meet certain strict tests of reasonableness.

Whistleblowing in the NHS

The culture of the NHS is complex. As revealed by the Public Inquiry into the Mid Staffordshire disaster, it can be affected by an imperative not to “do anything to embarrass the Minister”. Repeated cover-ups have been exposed under all governments. There have been well-known failures to listen to whistleblowers or to create conditions in which staff can raise concerns. A few examples:

Graham Pink, a nurse, was sacked and won his Employment Tribunal case against Stockport Health Authority in 1993. His lawyer commented: “His victory represents a triumph for those whose priority is care for patients over those whose first care is for balance sheets.”

Dr Linda Reynolds, a GP, raised the alarm over Harold Shipman.  The Public Inquiry by Dame Janet Smith commented on issues of disbelief, which whistleblowers often encounter: “I accept that DI Smith found it difficult to believe that Shipman might have murdered his patients… I observe that Dr Reynolds had surmounted this difficulty and had made her complaint.”

Dr Steve Bolsin raised concerns about mortality in the Bristol paediatric heart surgery scandal, which resulted in a Public Inquiry report in 2001. He reported being ostracised and famously decided to leave the country.

Several whistleblowers tried to raise concerns about the rogue surgeon Ian Paterson but got short shrift.

In the Mid Staffs disaster, Robert Francis, the Public Inquiry chair, expressed a concern that more staff did not speak up despite failures of fundamental standards:

“The first inquiry heard harrowing personal stories from patients and patients’ families about the appalling care received at the Trust. On many occasions, the accounts received related to basic elements of care and the quality of the patient experience. These included cases where:

The extent to which staff raised concerns is moot, but it is likely that more staff would have spoken up had it not been for an oppressive trust culture, and poor handling of staff concerns:  “…a culture of fear in which staff did not feel able to report concerns; a culture of secrecy in which the trust board shut itself off from what was happening in its hospital and ignored its patients; and a culture of bullying, which prevented people from doing their jobs properly.”

Freedom to Speak Up Guardians

In Robert Francis’ Mid Staffs Public Inquiry report he included a recommendation that any obstruction of whistleblowing should be a criminal offence. However, in his later Freedom to Speak Up review, he distanced himself from such a position.

The Freedom To Speak Up review has been criticised by many whistleblowers for not making strong enough recommendations. Most critically,  “I want to emphasise that I am not proposing an office to take over the investigation of concerns…. this needs to remain the responsibility of the local organisations.”

Where matters of life, death and serious misconduct are concerned, this is a precarious approach. It is not usual to leave putative embezzlers in charge of the accounts. As well as dishonesty, anti-social behaviour which jeopardises the public interest also needs to be prevented by external oversight and restraint. Yet Francis merely proposed a system of internal Freedom To Speak Up Guardians, who should ‘watch over the process’, and ‘oil the wheels’.

However, there was no evidence base for this proposal. The record of Staffordshire and Stoke on Trent Partnership, the exemplar trust which he cited in the FreedomTo Speak Up review, did not bear scrutiny. Brighton and Sussex University Hospitals NHS Trust, a trust which was also a prototype for the Guardian model, has continued to struggle with governance and patient safety problems. Between February 2014 and April 2017 it attracted 21 coroner’s reports to Prevent Future Deaths, many of which were deeply shocking in their detail.

Crucially, the internal Guardians proposed by Francis have no specific powers and no formal role in core processes. They are only facilitators and invigilators. As employees of the bodies whom they are supposed to hold to account, they are vulnerable to pressure and subject to potential conflicts of interest.

When responding to Francis’ review in 2015, the Department of Health “We now expect local NHS organisations to take forward the actions that are for them in an effective, proportionate and affordable manner and that guidance will be published in due course by the Independent National Officer and the national regulators, as described in the Freedom to Speak Up report” (paragraph 27).

This resulted in variation across trusts, for which there was no credible rationale. Importantly, it resulted in some appointments where the role

was added to existing workloads without dedicated time. There were also numerous corporate appointments – i.e. directors of the trusts concerned who might not be seen as approachable by staff –  and poor diversity. Some of these issues were later officially recognised.

It even emerged that one former Speak Up Guardian had fraudulently claimed the qualifications on the basis of which he had been chair of a trust, a fraud for which he was subsequently jailed.

The National Freedom to Speak Up Guardian

In addition to internal Guardians, Francis proposed a national office, now known as the National Freedom To Speak Up Guardian. Francis’ primary reason for the creation of this office was to undertake external whistleblowing case reviews:

There should be an Independent National Officer resourced jointly by national systems regulators and oversight bodies and authorised by them to carry out the functions described in this report, namely:

Francis envisaged that the National Guardian would have no powers, but would have borrowed authority from system regulators and could ask regulators to make directions to ensure good practice. Francis’ expectations of the office were deliberately elastic, introducing the risk of arbitrariness and therefore unfairness. This has proven to be the case  and is an ongoing concern.

A very large amount of money has been spent on the Freedom To Speak Up Project. The National Guardian has an annual budget of approximately £1 million.  Over 500 local Freedom To Speak Up Guardians have been appointed, requiring training events and other resources. Health Education England has contributed resources. Various high-profile conferences have been held at considerable expense. Most recently, it has been revealed that the Department of Health and Social Care has spent £628K on forthcoming evaluation research on local and National Guardians. There is concern that this research does not concern itself enough with the experience of whistleblowers, especially the harm (or ‘detriment’) that they may incur.

There is also concern about how the National Guardian’s Office and the Department of Health have represented the progress of the Freedom To Speak Up Project. At the National Guardian’s conference on 6 March 2018 the Secretary of State claimed: “So far this year 4,600 concerns have been raised with Freedom to Speak Up Guardians and 90% say they would speak up again”. This was misleading, because the 90% statistic was based on very incomplete data and also did not relate to a denominator of 4,600, as had been implied.

To give an example of incomplete data, an FOI disclosure by the University Hospitals of Morecambe Bay NHS Foundation Trust of 12 March 2018 revealed that there had been 124 concerns raised with its Freedom To Speak Up Guardian. Related to this, 87 feedback forms had been sent to staff who had raised concerns, but only 32 of these (37%) were returned.

As for the ‘90% would speak up again’ statistic, it had been supplied to the Secretary of State by the National Guardian’s Office. It had not been published and has still not been published, breaching the UK Statistics Authority’s Code and the principle of equality of access to statistics. The UKSA has stated that it continues to pursue publication of the statistic.

The upbeat view expressed by the Secretary of State and the National Guardian is not supported by the fact that the key NHS staff survey metric on whistleblowing – Question 13b “I would feel secure raising concerns about unsafe clinical practice”– has not changed at all in the period during which the National Guardian and Freedom To Speak Up Guardians have been in place. The overall national score was 70% in 2016 and it was 70% again in the 2017 survey.

Added to this is questionable behaviour by regulators, such as failing to protect whistleblowers and hold abusers to account, or even acting to a whistleblower’s detriment.

The role of law in protecting the public interest

The government and Robert Francis argue that it is necessary to work on changing culture, and that changes in the law to protect whistleblowers are less important. This is a fallacy: besides providing sanctions, well-written, strong law has a communicative function and can drive culture and behavioural change. The key to protecting both NHS and social care whistleblowers is to protect all UK whistleblowers by means of improvements to the law.

At present, UK whistleblowing law is very flawed. Even one of those who originally helped draft the current law, Lord Touhig, subsequently recognised this. The law does not compel investigation of concerns, confers no legal duty of protection and does not hold individuals to account for acts of reprisal.

Reprisals against whistleblowers can be devastating.  Despite carefully crafted press releases, the NHS has not kept promises to make amends to those whistleblowers whom it has already harmed , sending out a very unfortunate message to its remaining staff.

Alongside much-needed improvements in the law, whistleblowers need the protection of an agency that is independent of government departments and has powers to investigate, remedy and where necessary litigate to enforce good practice and protect the public interest. Safety-critical sectors such as the NHS illustrate the absolute necessity of good whistleblowing governance and what can go disastrously wrong when there is maladministration. In an age of austerity when the risks are all the greater, it is vital that frontline staff have a voice. 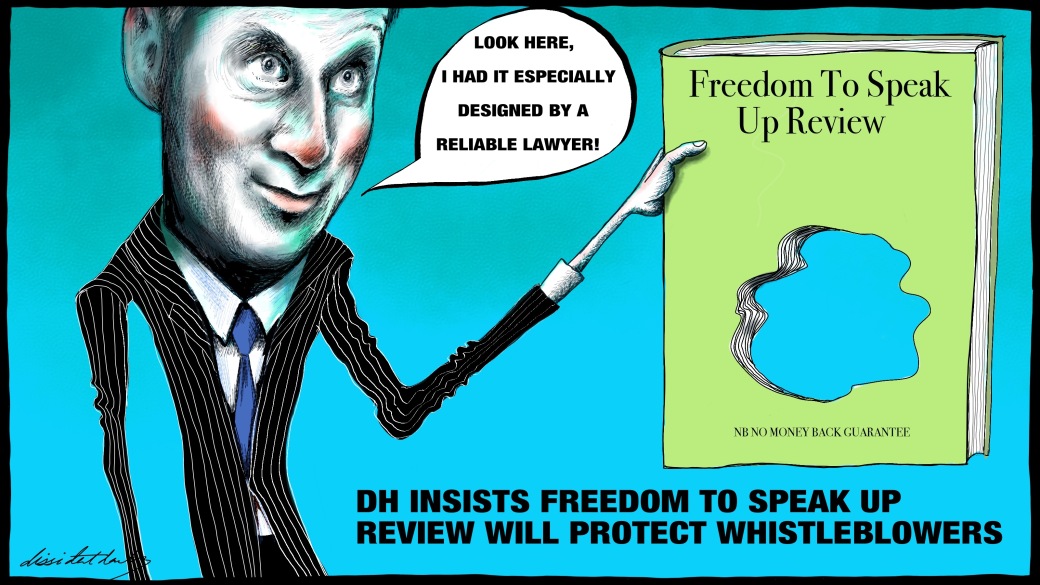 One thought on “Whistleblowing in the NHS isn’t fixed yet, and this leaves patients exposed. An overview of unfinished policy business.”